Patient, 81, steps out for stroll two days after pioneering heart op in Brighton

An 81-year-old patient underwent a pioneering heart procedure in Brighton and was back home and taking his dog out for a walk just two days later.

Ron Thomson was the first person in Britain to have the new form of heart valve surgery – known as the “High Life” procedure – at the Royal Sussex County Hospital, in Brighton.

The cardiac surgeons, David Hildick-Smith and James Cockburn, are due to operate on another patient, a woman, in a fortnight’s time.

Mr Thomson, a grandfather, from Sayers Common, near Hurstpierpoint, had a leaking mitral valve in his heart – and to correct this with a new replacement would normally have required open-heart surgery.

But for the first time in Britain, a heart valve was replaced without leaving any chest scar.

The replacement valve was advanced from a vein in the leg and up through the body to be switched with the leaking valve.

Hospital trust bosses said that the procedure was entirely novel, less invasive, quicker to complete, reduced the patient’s stay in hospital and meant a speedier recovery back home.

The Royal Sussex, where the surgery took place, is one of a number of European hospitals taking part in a trial to evaluate how well the new procedure works. University Hospitals Sussex, the NHS trust that runs the Royal Sussex, is leading the trial in the UK.

Professor Hildick-Smith said: “It’s a completely new way of implanting a mitral valve in the heart. It’s never been done in the UK before.

“The standard way to do it is with open heart surgery which is a major invasion of the body and requires the heart be stopped for the duration of the operation.

“This procedure is done without interrupting the heart while it pumps. This sort of procedure has been done with the aortic valve but the mitral valve is different. It is much more intricate and more difficult to get to.

“We have had a lot of success in doing a similar procedure on the aortic valve and we are involved in many trials in this arena so we were very honoured to be chosen to lead the study for the UK and do the first cases. 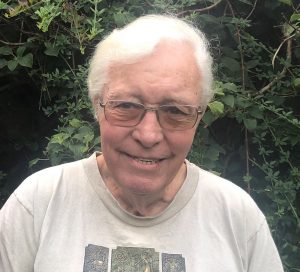 “For this new approach, we go in through an artery in the groin and go up to the heart. It is an ingenious technology and requires us to make a lasso around the base of the leaky mitral valve. This part is technically challenging.

“We then go in through a vein in the other leg, puncture between the sides of the heart and put in the valve through this puncture into the correct place, pushing aside the leaking one.

“We watch it all on ultrasound and x-ray to be fully in control of what we are doing. The net result is a fully functioning new valve without open heart surgery.”

He added: “It is pretty technically demanding and we had people from Canada and California – people who had done the procedure themselves – watching on and guiding us as we went along while the whole process was being filmed by a crew. It was a great experience and worked really well.

“It’s great news for the future that this works. It is going to be better for patients. There are no deep incisions, no cutting into the chest, no stopping the heart or putting patients on a bypass machine to do the breathing and the circulation of blood. And overall, it was much quicker.

“Ron was fully awake an hour after the procedure and was able to go home after two days whereas with open heart surgery you are probably talking seven to ten days. We hope it will make a big difference to his life.

“We are delighted that the procedure went really well and we are looking forward to being able to offer it to others.” 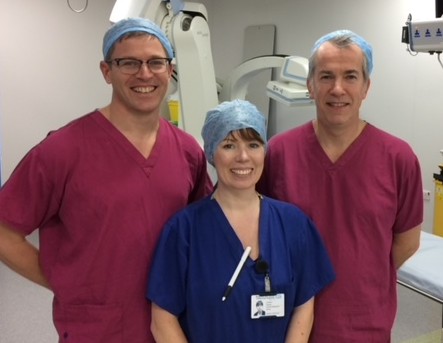 The equipment currently used for the procedure fits only one size and shape of heart – and Mr Thomson was chosen because his was a perfect fit.

He said: “I am the number one in the UK – but there were six other people who were seen before me but were not a fit.

“So I was seven times lucky. So 007, that’s me. Hopefully, it will make me feel like James Bond.

“I was really proud and happy to be the first here to have it. I didn’t know much about it mind. I was out cold, wasn’t I? I was in and out in two days and back walking my dog. Incredible.”

He added: “The care I’ve had was great – just as it was when I had a previous operation in 2018. My situation was only going to get worse so I was so grateful to have the opportunity and so happy that it looks like it’s all gone well, so far. I really appreciate the care I received from all the staff.

“I’ve got three daughters and five grandchildren so they are all happy for me. And I am happy to be back home with my wife Judith and looking forward to getting about in the garden again.” 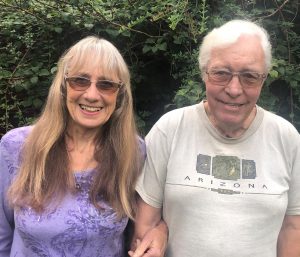 She said: “It’s been a very successful procedure. We are all so pleased with the initial results. Over the next few months, I will be monitoring Ron’s progress and overall rehabilitation and liaising with the study sponsors to report on his condition.

“After five years – and there will be more and more of these procedures over this time –  if everything is how we expect it to be in terms of clinical outcomes, it could then become commercially viable for widespread use.

“Our next transcatheter valve implant is already set for Wednesday 18 August so we are really excited to be at the forefront of this.”