Bank Holiday in Brighton at the Find Joy Festival 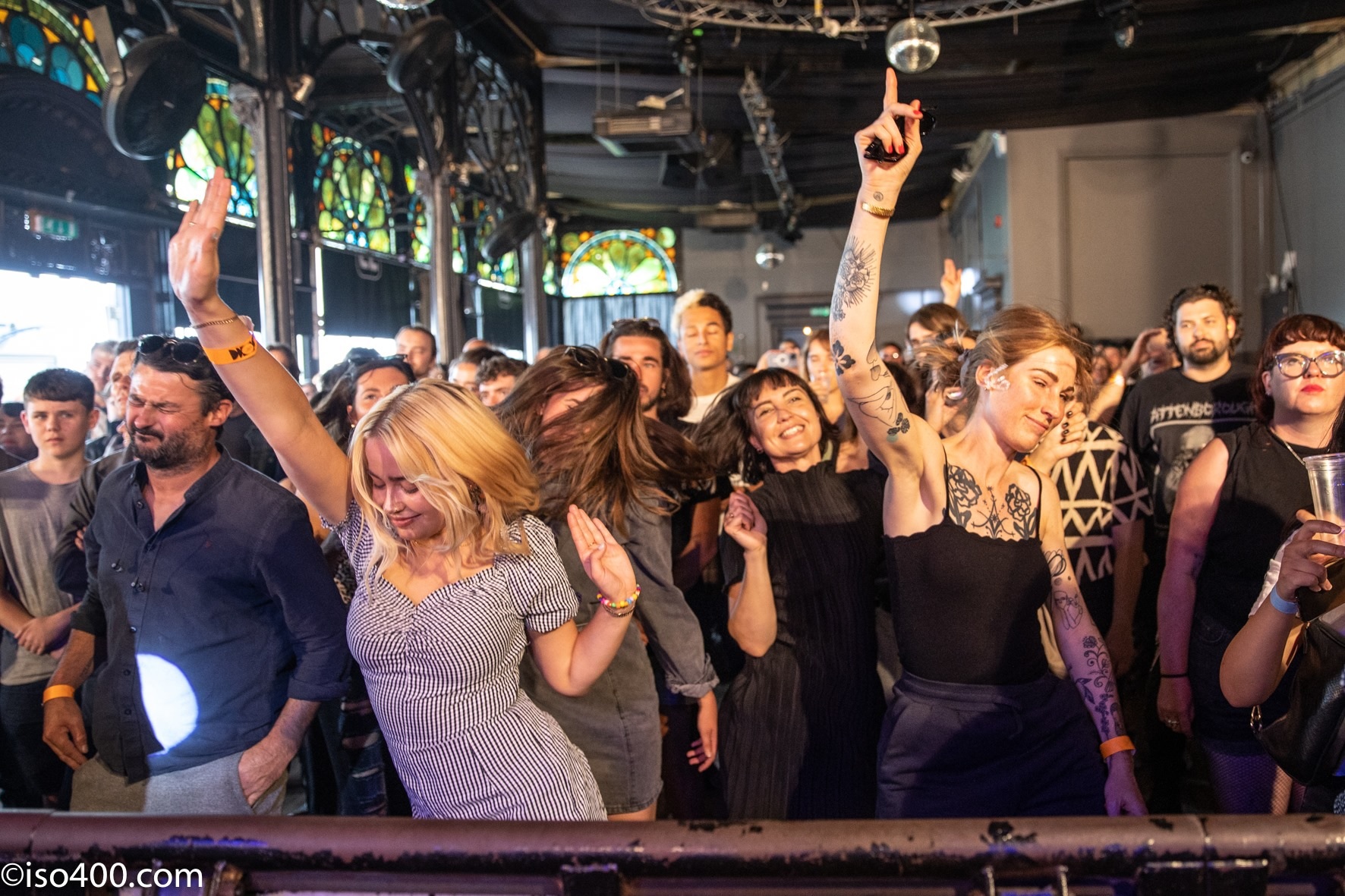 A Bank Holiday Sunday in Brighton, the sun is shining and local promoters ‘JOY.’ are hosting the second of a free two day festival of emerging artists at the Concorde 2, which is located along Madeira Drive on Brighton seafront.

I chose to go on the Sunday as opposed to the Saturday as I wanted to see Buzzard Buzzard Buzzard and The Mysterines, two emerging bands that have been on my radar for sometime. 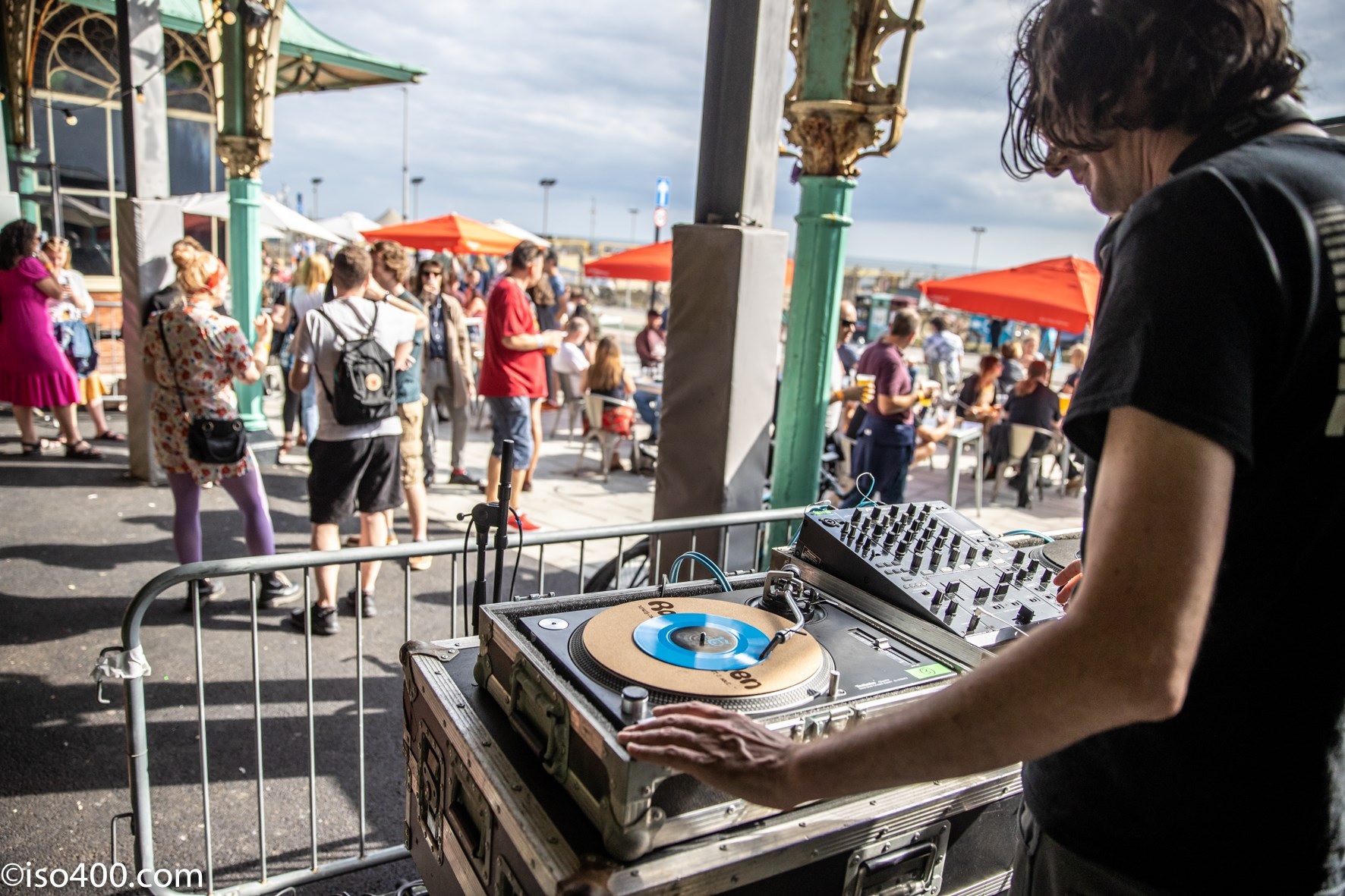 Dan from Resident music in Brighton on the decks at Concorde 2, Brighton 29.8.21 (pic Mike Burnell/is0400.com) (click on pic to enlarge!)

The event was in the main split between bands performing inside the venue as usual and then DJ’s (including Dan from Resident on the vinyl and Howard Kaye on the CD’s) and acoustic sets from Dessie Magee and Lena Rise etc taking place on the Concorde 2’s new outdoor terrace area. I mainly based myself inside. 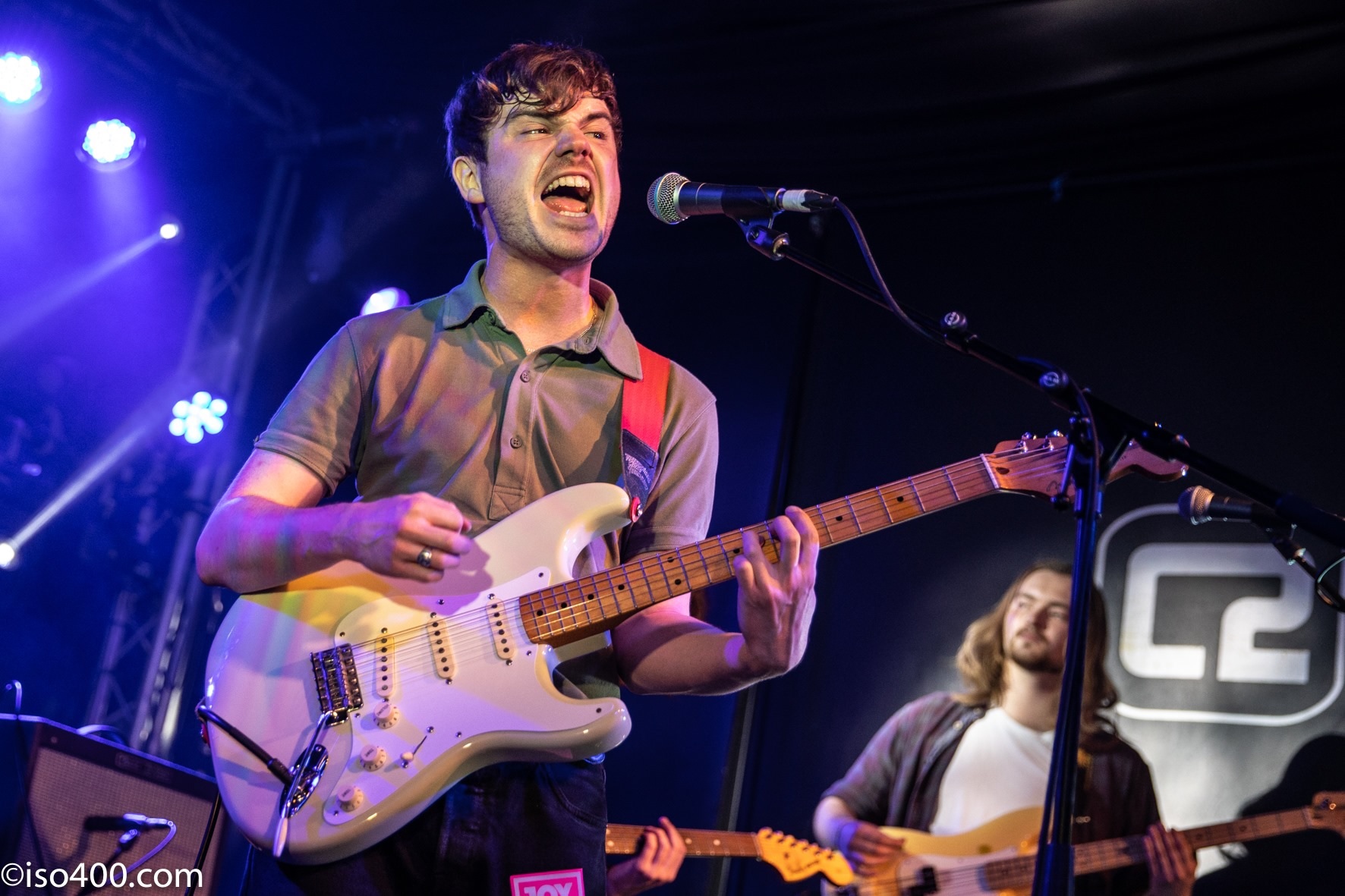 Proceedings inside were meant to kick off at 1pm, but due to the first band cancelling, Weird Milk a London quintet indie band were the first band on at 2pm. Part Arctic Monkeys crossed with a bit of Orange Juice and Aztec Camera, they played a tight set to a not very full Concorde 2. 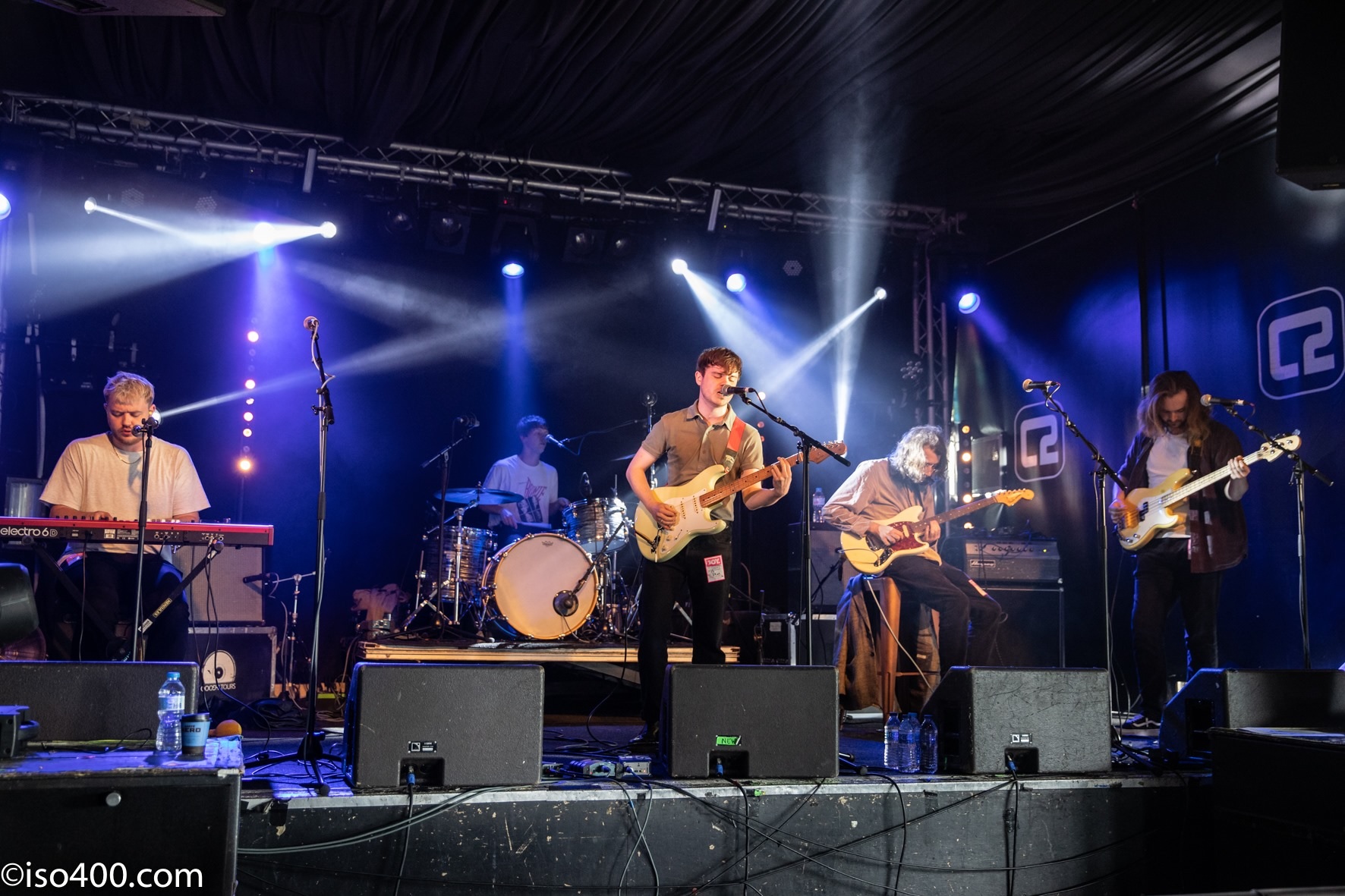 Highlights were recent singles ‘Time Machine’ and ‘We Were Strangers’. They are playing again in Brighton at the Green Door Store on Wednesday 24th November 2021 and are definitely a band to watch. Grab your tickets for that concert HERE. 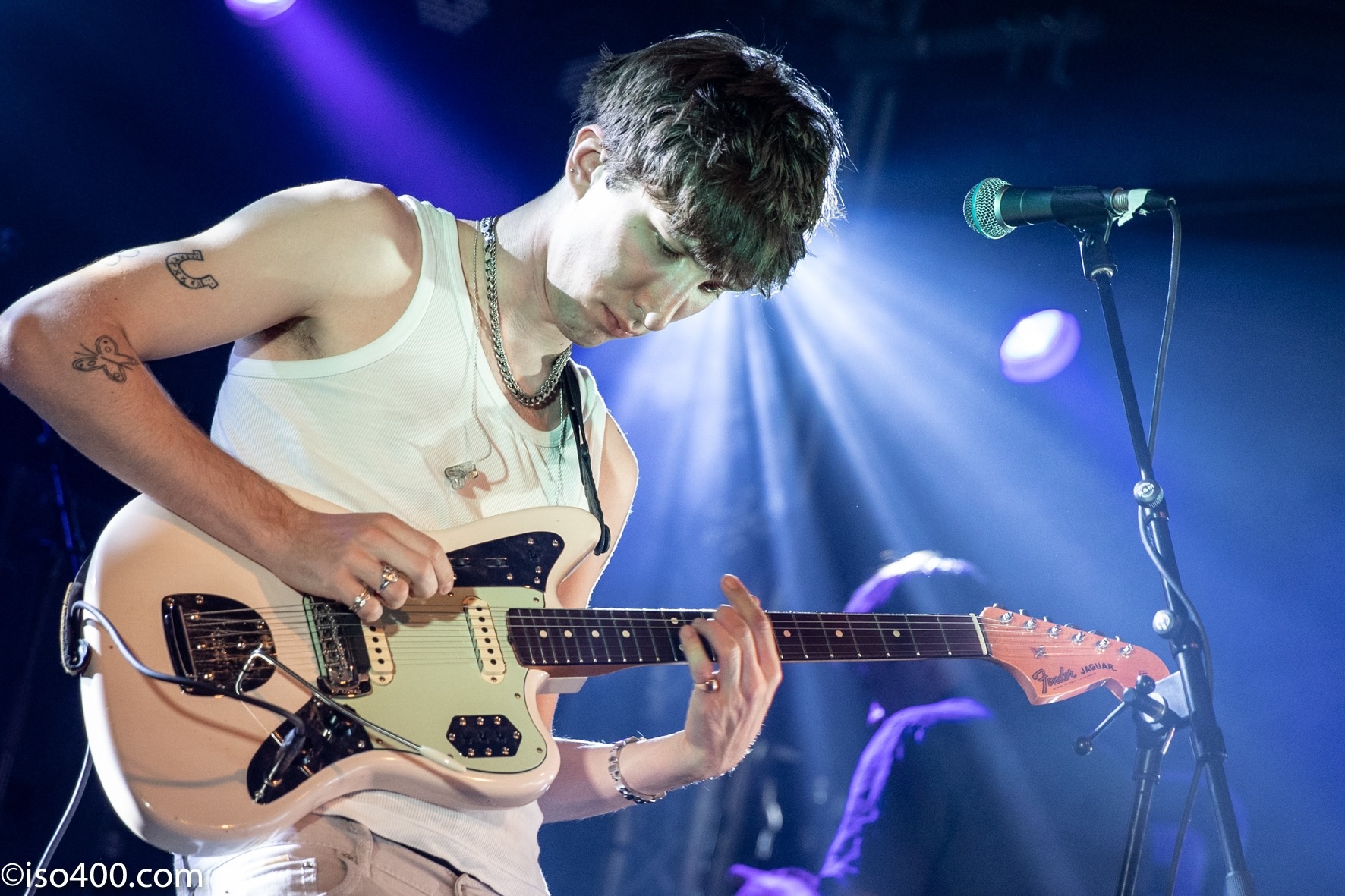 Next up was Joey Maxwell a young South East London soft pop rap artist reminiscent of Jamie T. Catchy tunes got the ever increasing crowd dancing. ‘Streetlights’, a single released earlier in the year, was the standout song of the set mixing keyboards and saxophone to great effect. 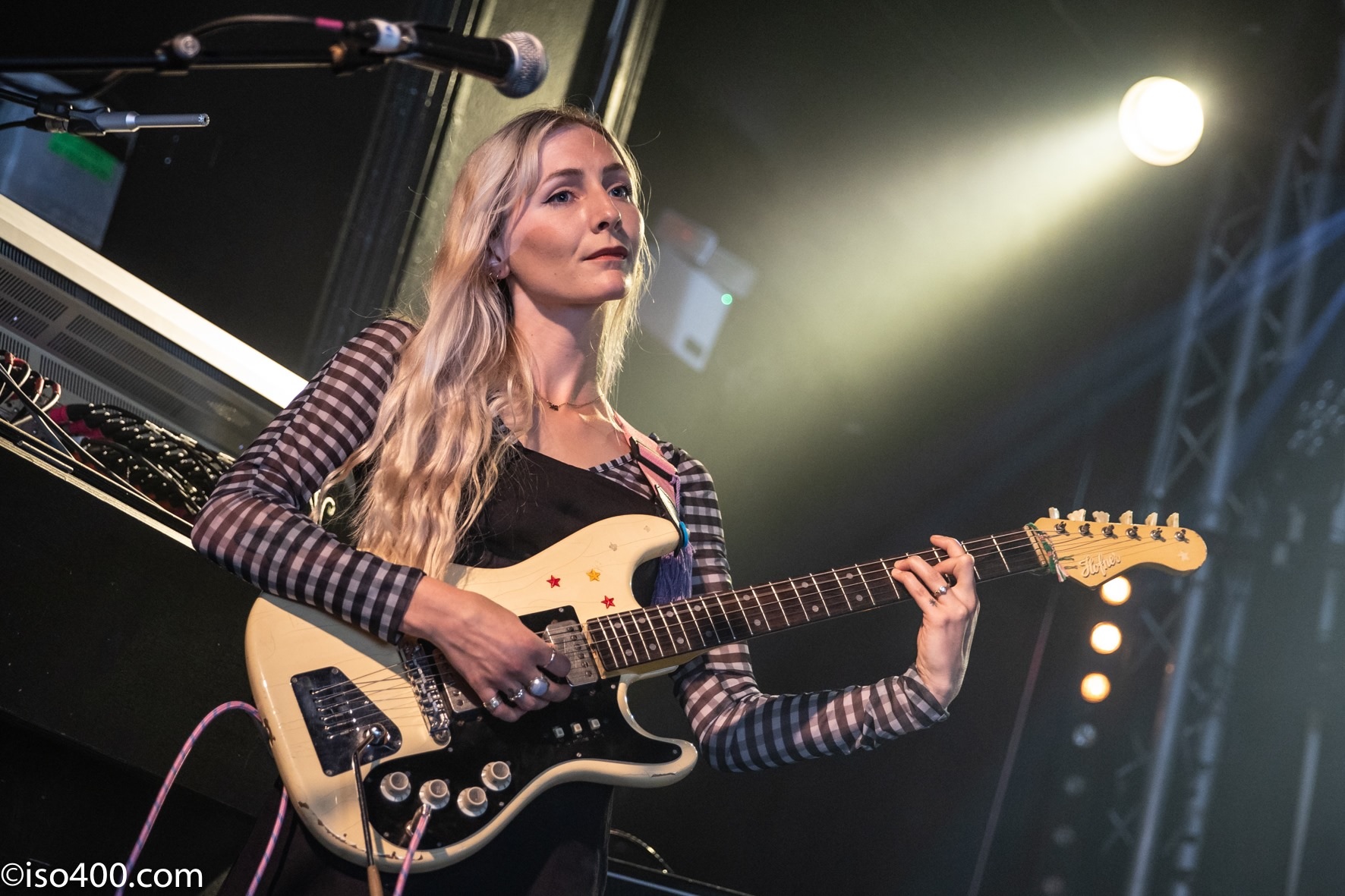 ‘Chaise Lounge’ a recent single by Wet Leg has been played a lot on 6Music recently and this band from the Isle Of Wight have just joined Plastic Mermaids and Champs as another island favourite of mine. They played at 5pm and attracted the biggest crowd of the day. 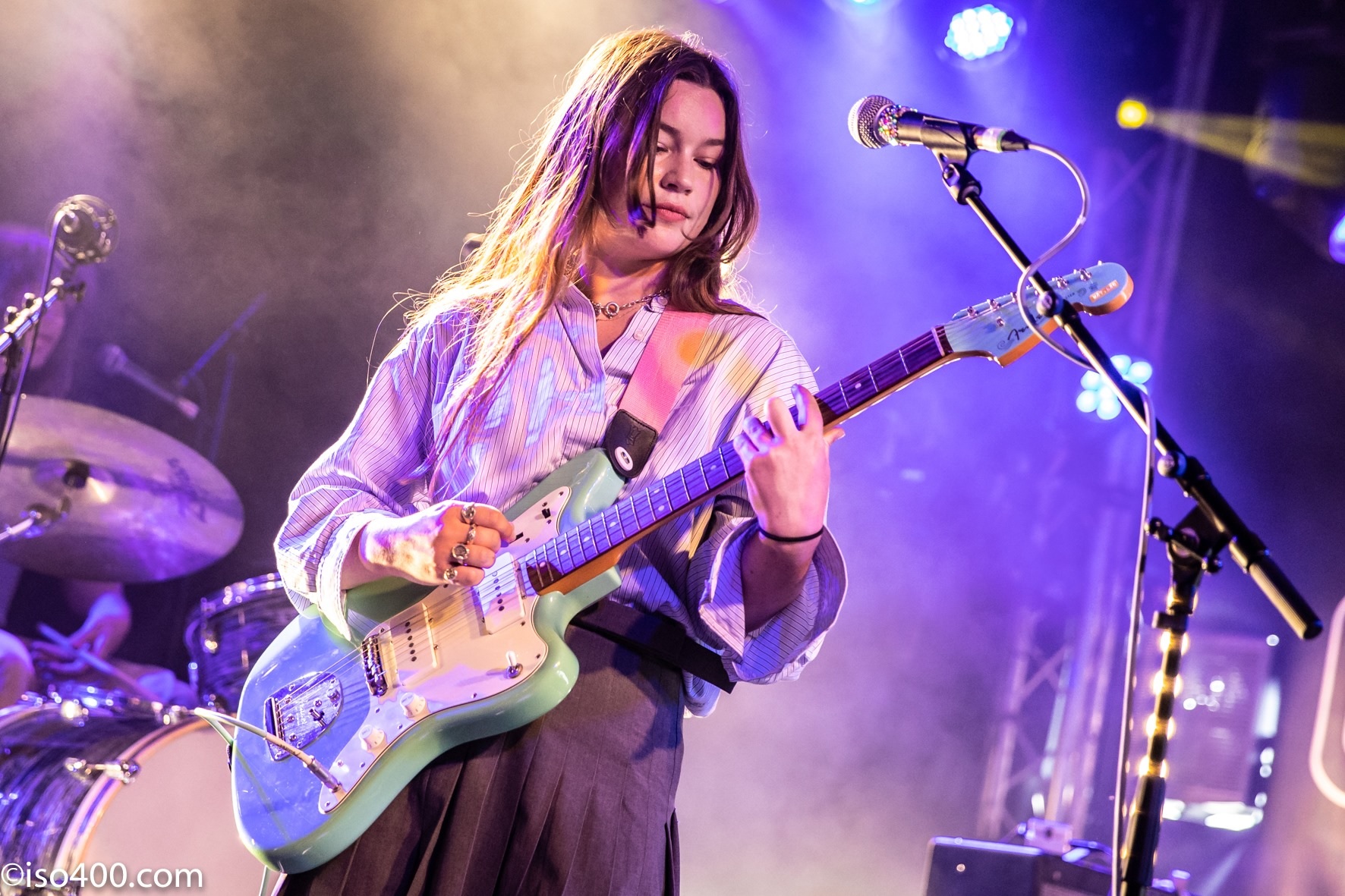 Rhian Teasdale and Hester Chambers and their three chums produced an epic wall of guitars with almost spoken vocals and have a knack of writing catchy tunes. They have recently signed to Domino Records and I expect to hear a lot more from them in 2022. They played six songs, ‘Everything Is Going Wrong’ and ‘Supermarket’ were standout tracks. They will be back in Brighton again soon, when they will be appearing with Shame and The Umlauts at CHALK on Monday 15th November. Grab your tickets HERE. 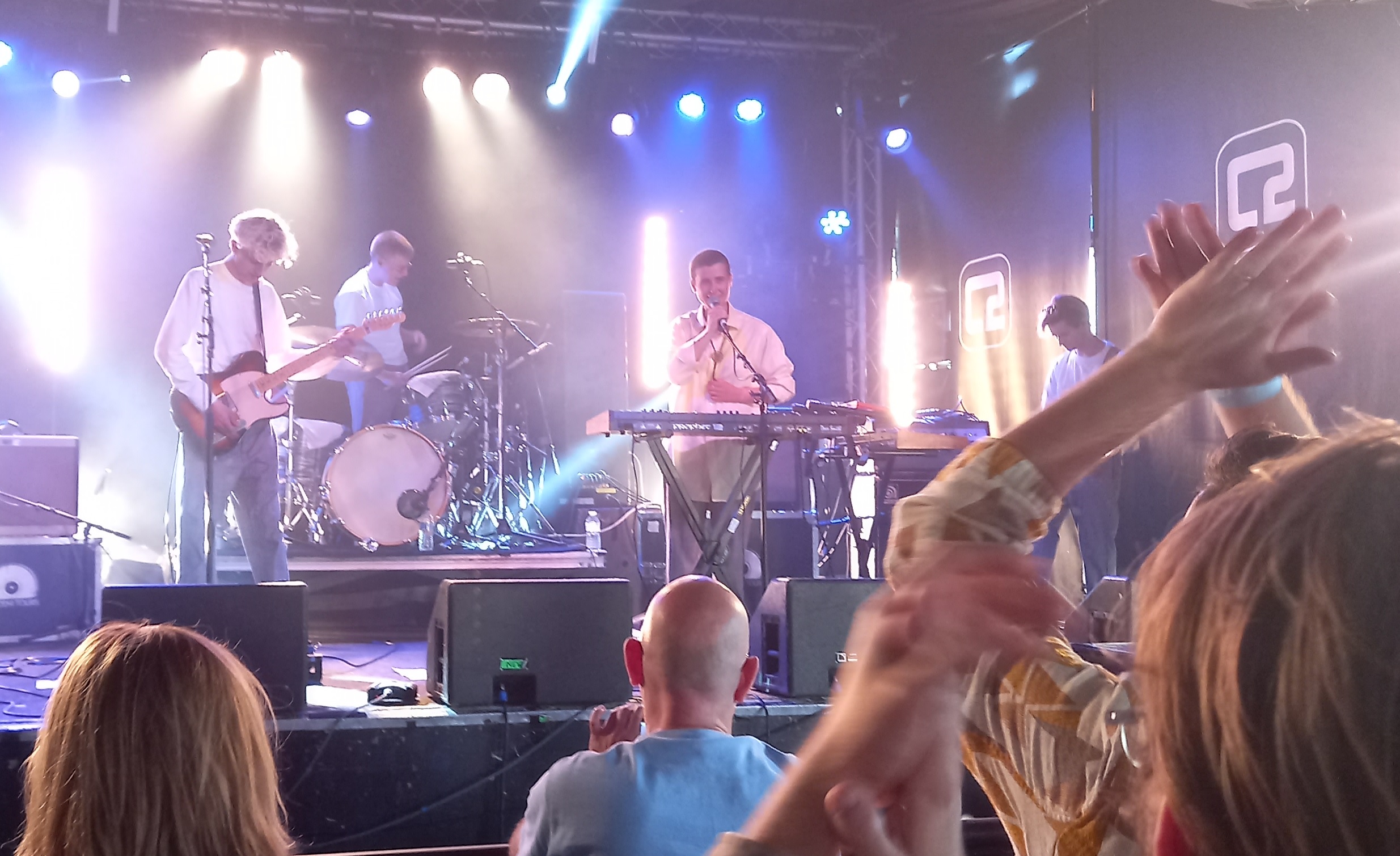 As the sun was setting, Manchester band PORIJ took to the stage, their July 2021 single ‘Ego’ has been played a lot on the radio recently. They play catchy electro pop, mixing two keyboards, drums and guitar. ‘Nobody Scared’, another song I’ve heard a lot on the radio, sounded really good live. 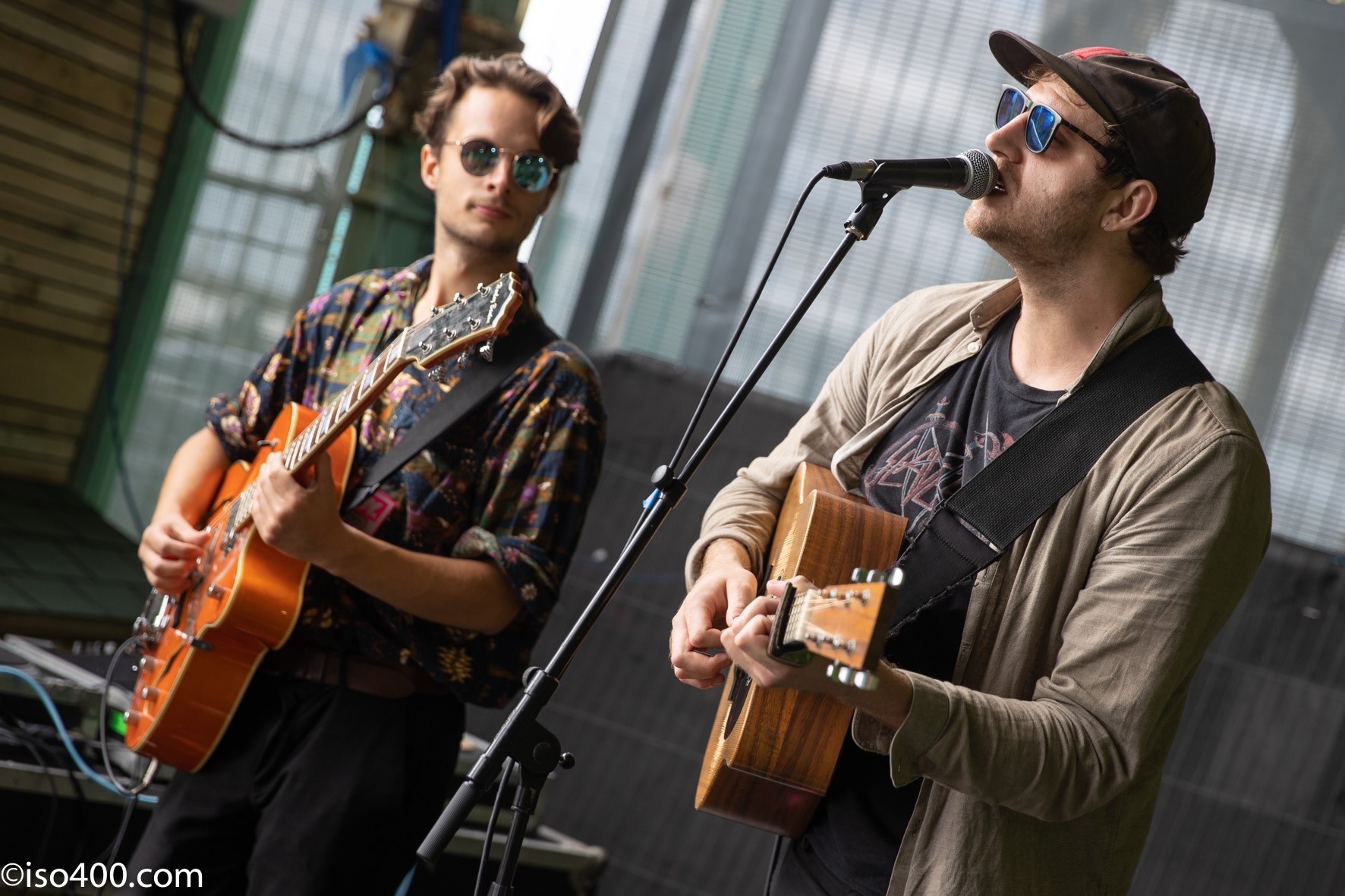 Buzzard Buzzard Buzzard were next up. This Welsh four piece is another band to watch out for in 2022. A bit Beatles-esque in places, a touch of T. Rex mixed with The Darkness. They are quite difficult to pigeonhole. Vocalist Tom Rees certainly seems to have a bit of the Freddie Mercury about him and I was really impressed with their set. ‘New Age Millennial Magic’ and ‘John Lennon Is My Jesus Christ’ were both really strong songs and the crowd really took to them.

The final band of the night were The Mysterines from Liverpool. They have already amassed a pretty big following and the youngsters in the mosh pit were certainly enjoying themselves. The Mysterines have quite a hard rock sound and singer Lia Metcalf at only 20 is certainly a bona fide rock star in the making and it’s only a matter of time before this band are playing much bigger venues. Recent single ‘In My Head’ had the young audience going crazy and sounded brilliant live. I also liked the songs ‘Gasoline’ and ‘Loves Not Enough’, both really strong songs. The set finished promptly at 10pm and the large crowd went home happy.

A great day’s entertainment and it made me think how much I’ve missed The Great Escape Festival as a wonderful way to discover new artists. The festival is due to take place in Brighton from 11th to 14th May 2022. Purchase your early bird tickets HERE. 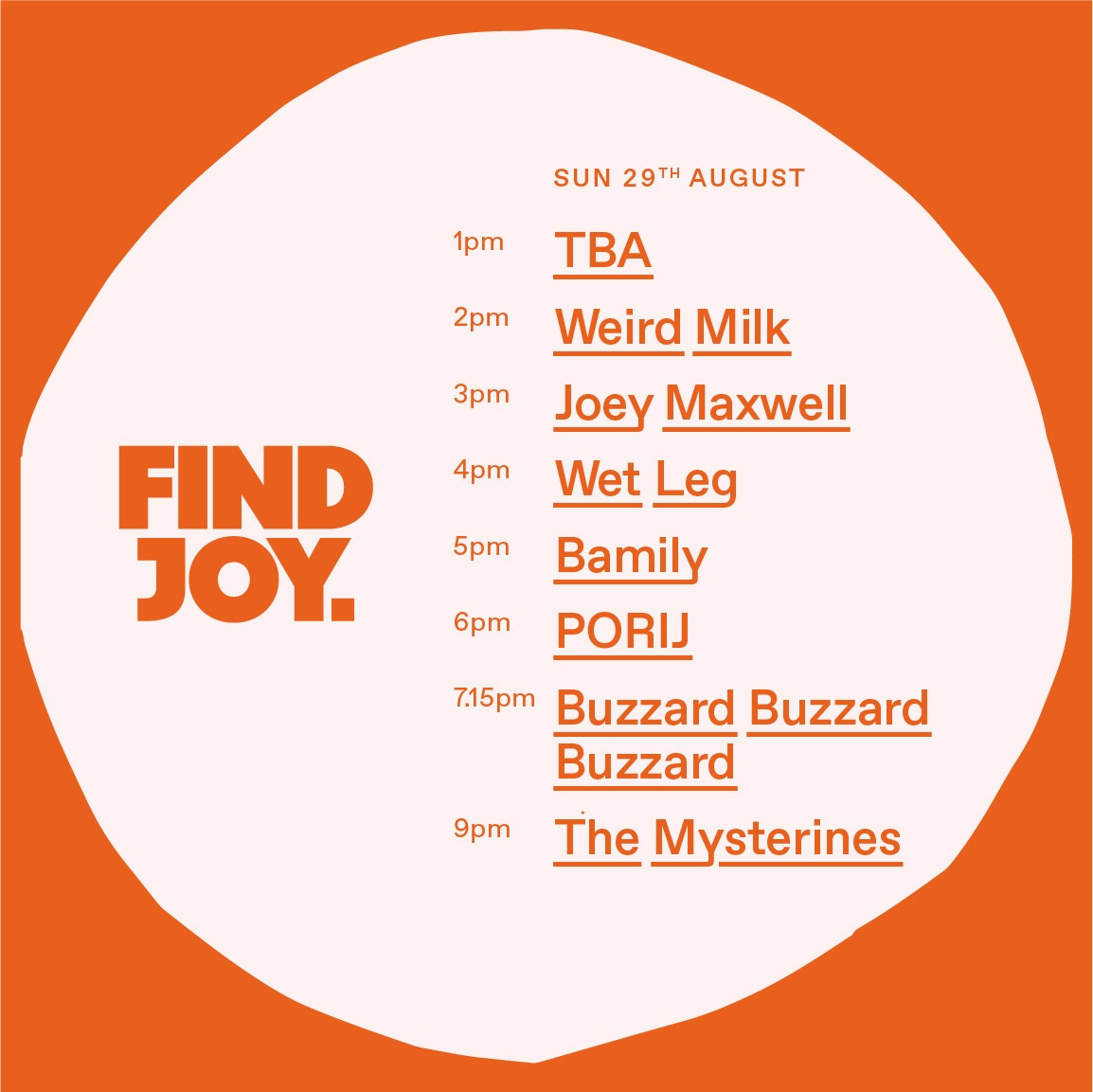 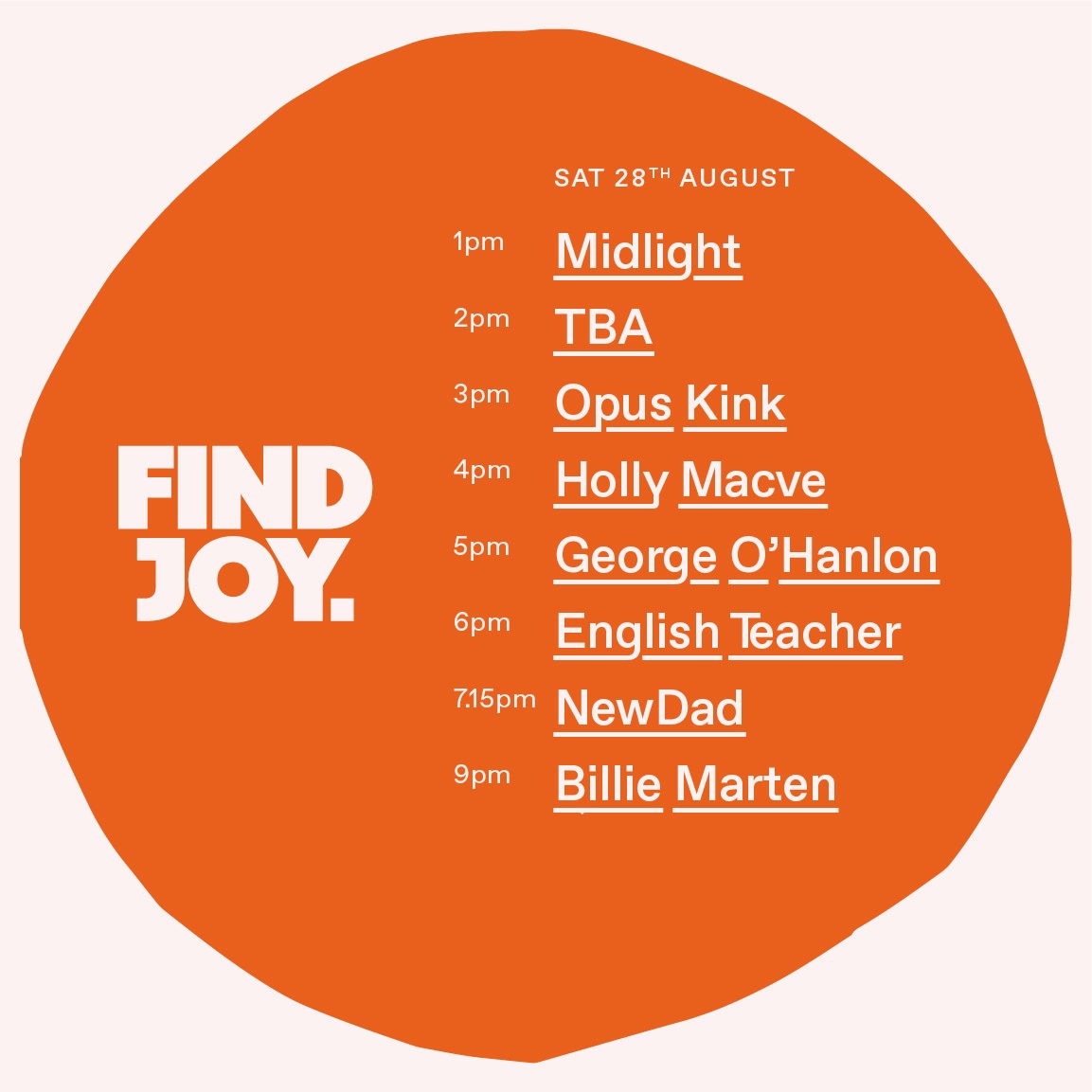 For those who were wondering which acts were appearing yesterday, here’s the flyer