Family home in Saltdean to be demolished and replaced with flats 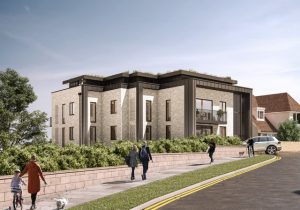 The proposed new flats in Withyham Avenue in Saltdean

Plans to knock down a house and build seven flats were granted planning permission despite concerns about the design.

Councillors granted permission to demolish the house at 1 Withyham Avenue, Saltdean, and replace it with a four-storey block.

Independent councillor Bridget Fishleigh called on fellow members of Brighton and Hove City Council’s Planning Committee to reject the proposal because of its design.

She shared a picture of an art deco building designed by Richard Jones in nearby Chichester Drive East as an example of Saltdean’s style of buildings with rounded corners and white render.

The architect was also responsible for the Saltdean Lido and Grand Ocean Hotel.

Councillor Fishleigh, who represents Rottingdean Coastal ward which includes Saltdean, said: “This could be the case where we push back and say ‘no’ we demand higher design values.

Conservative councillor Dawn Barnett agreed, saying: “It’s a hideous-looking building. It seems a shame to keep ripping down beautiful family homes with gardens which are proper family houses to put seven square boxes in there.”

Green councillor Marianna Ebel said that she found the design acceptable, adding that it would provide more living space.

Labour councillor Daniel Yates agreed that the design was not in keeping with the best of Saltdean but said: “That also looks like Timor House or a finger of Grand Ocean.

“Both have been given planning permission relatively close to that site recently to put flats on to sites in west Saltdean.

“It is not to my mind attractive. There could be better solutions. But it is not out of keeping with recent design decisions this committee has taken in and around Saltdean.” 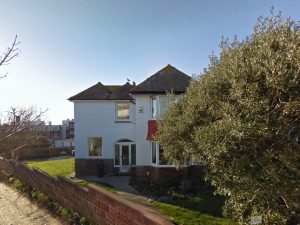 The house to be demolished in Withyham Avenue in Saltdean

The scheme has 20 cycle parking spaces and the committee agreed to add a condition so that they included cycle parking for cargo bikes and other alternative bicycles.