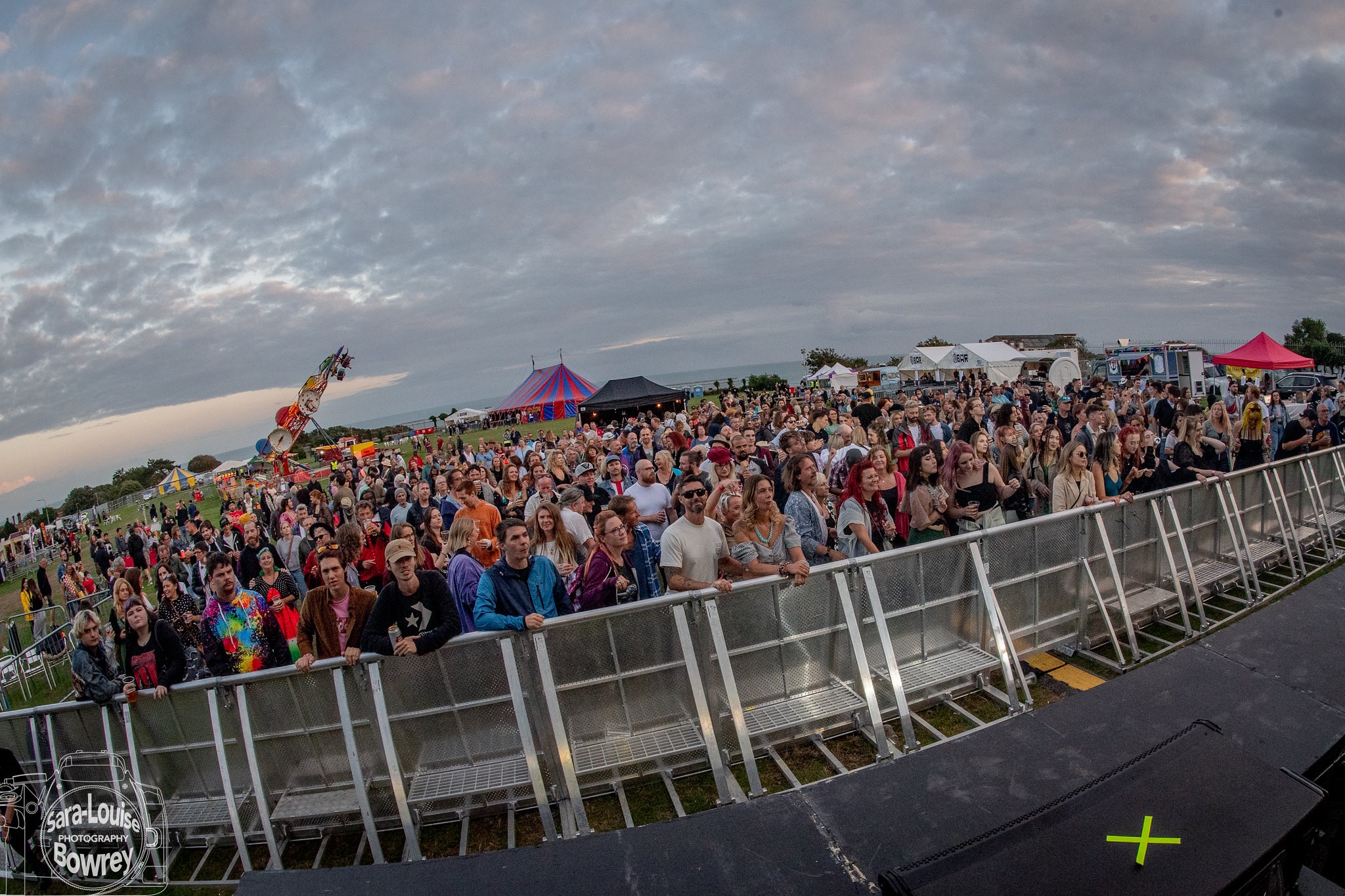 Are you in the ‘Hastings Rocks’ crowd at The Oval, Hastings 28.8.21 (pic Sara-Louise Bowrey Photography) (click on pic to enlarge!)

Hastings Rocks was a one-day festival, set up to showcase the wealth of diverse musical talent in the area. Run by the people behind the annual Fat Tuesday event, in conjunction with Hastings Pride, it also made a point of using local stage crew and sound and light technicians, along with DJs, photographers and filmmakers. Catering is also supplied by selected local outlets and vendors in recognition of the tough times felt right across the hospitality industry during the recent pandemic. 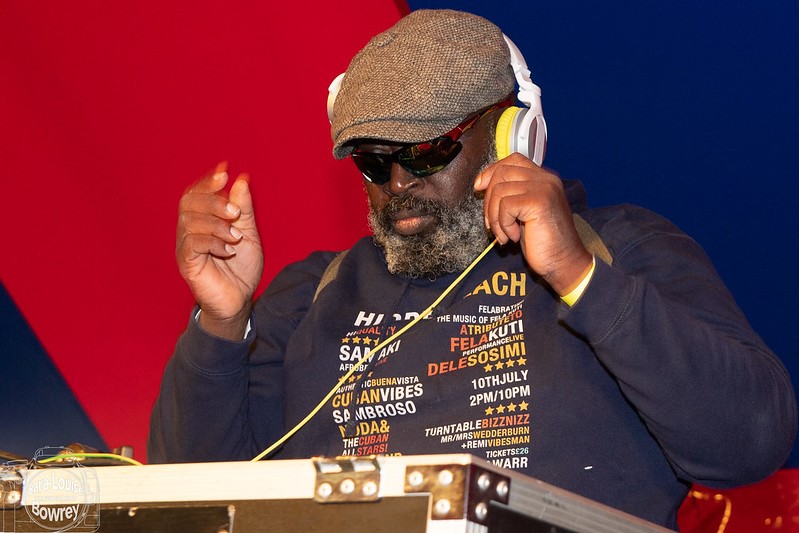 This must be the first time I’ve spent any time at home over the August Bank Holiday weekend and why not? Because on offer is one of the best days of music and it’s literally on my doorstep – well, a four-minute walk anyway.

And after the enforced hiatus of Fat Tuesday, this feels like a phoenix rising from the embers…an opportunity for the town to celebrate Hastings’ finest musical talent. We truly do have one of the richest offers around. 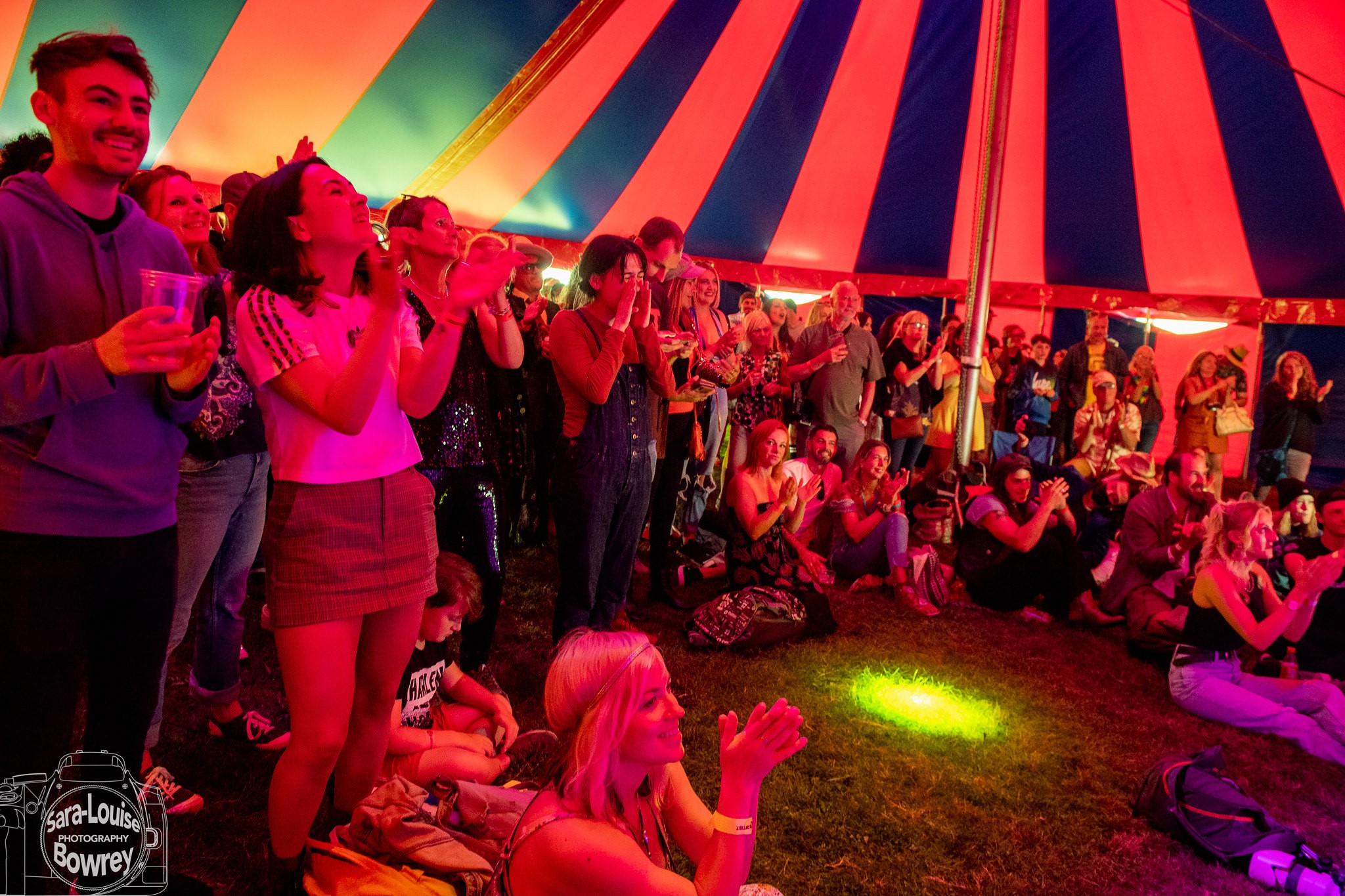 Set in The Oval with panoramic views across the English Channel, this is the perfect setting for a fun-filled day.

The Oval, for those who don’t know, is an area of open space up the hill from the town centre. The site comprises a main stage outdoors and a tented second stage run by local venue, The Piper. The infrastructure was set up for a free event (Hastings Pride) on the same site the following day – and the organisers wanted to make sure it didn’t go to waste. 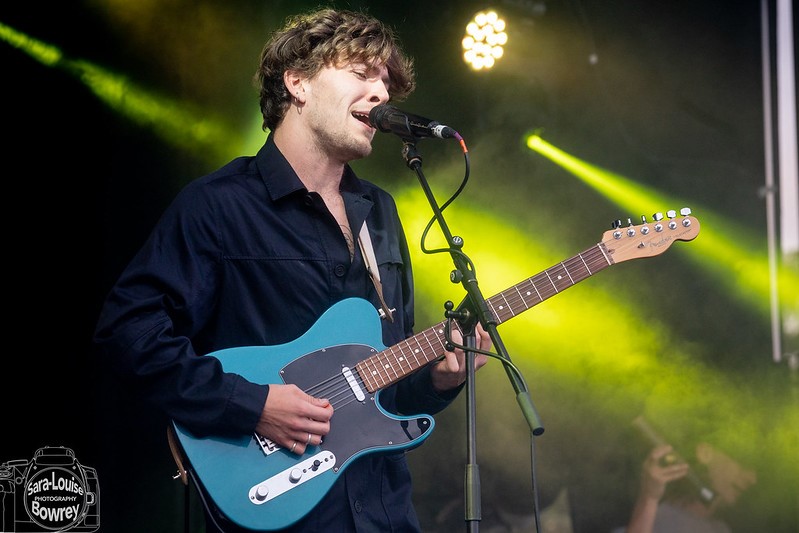 I’ve got to be somewhere else later on, but couldn’t resist popping along for the afternoon once I saw the stage times….because local hot/heads hot/shots Kid Kapichi, who you’d normally expect to be one of the headliners, have a slot supporting The Specials in Margate later tonight, so were playing at the super-early time of 1.45pm. They were followed by another excellent young band, Blabbermouth, and the proximity of the two sets is too good to miss. 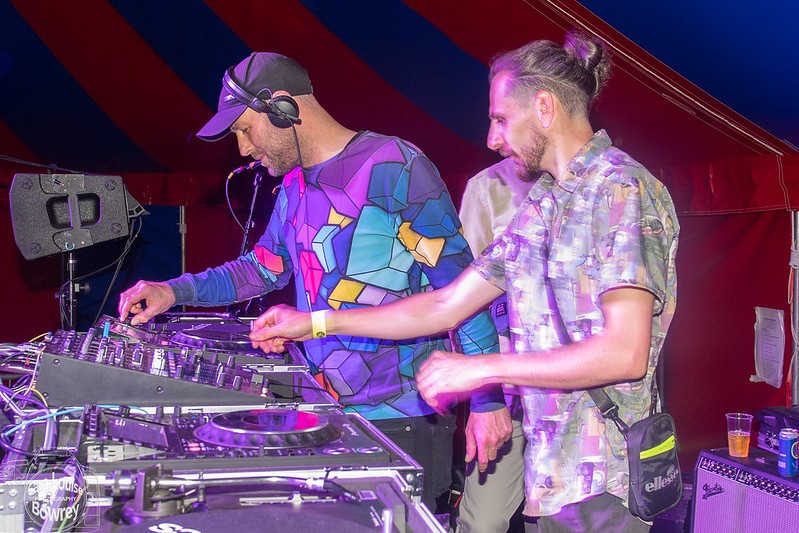 The first impression arriving at the site is that it’s well-run. There are plenty of staff and security, and everyone seems friendly and courteous. Inside there’s a good selection of food vendors, and it’s quick and easy to buy a drink. The main stage looks impressively imposing, and a sizable PA is moving a whole lot of air.

Onstage as I arrived was Hayley Savage, rounding off her set in her usual understated way… but in contrast, next up, was Sister Suzie and her band, pumping out some good time rhythm and blues boogie. 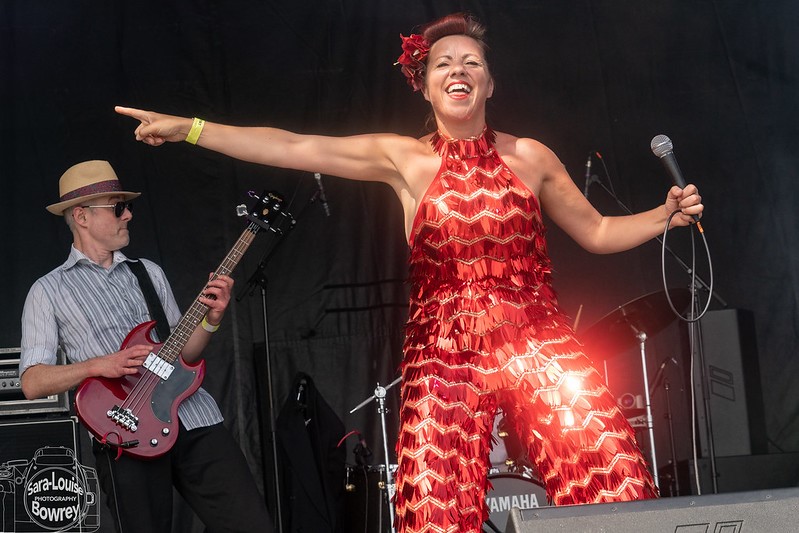 I can spot Suzie’s bright orange jumpsuit from right across the field, and her performance is equally attention grabbing. It’s all good fun, and the early afternoon revellers are enjoying a dance in the warm sunshine. The band are tight and slick, all seasoned performers of course. I recognise the familiar gurning dance of local bass legend Andy Ingram, pumping away on a red Gibson SG four-string. Matt Jackson wears a brown zoot suit and supplies plenty of twang from a Gibson semi-acoustic, and there’s Al Nicholls on tenor sax. The set is a mix of covers and originals and passes most agreeably. 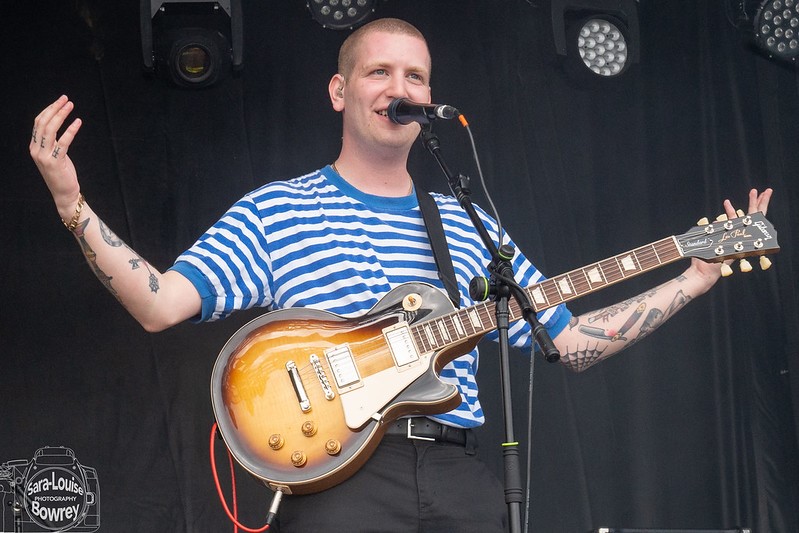 The changeover provides time to grab another beer and chat to a few friends, and then it’s time for Kid Kapichi’s set. They’ve brought their own backline with flight cases nicely sprayed with the band logo. If you haven’t come across them, the band are one of the hottest acts to come out of Hastings in many years. Their high-energy alternative rock, combining glam-tinged guitar with punk attitude, has won them a nationwide loyal live following, and their blistering debut album ‘This Time Next Year’ has cemented their reputation far beyond the South Coast. 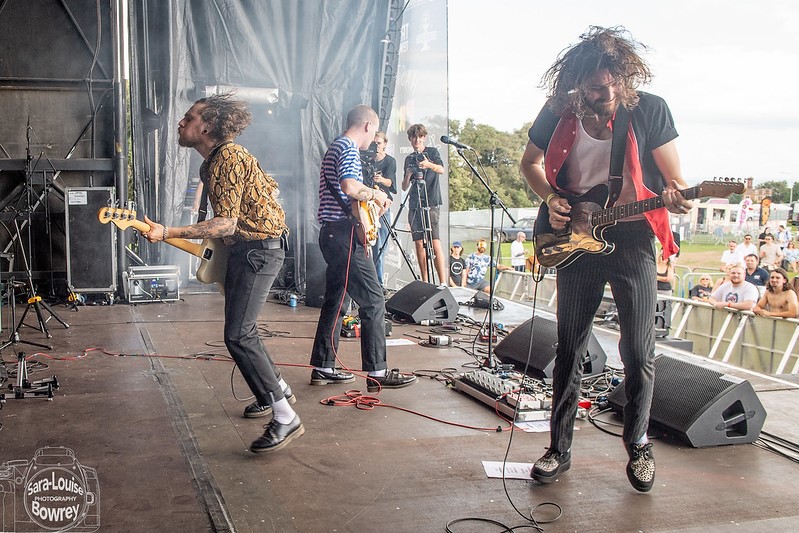 The set doesn’t get off to the greatest start. During opening number ‘Working Man’s Town’, lead vocalist Jack Wilson can’t hear his guitar at all, and the offending instrument is flung down onto the stage in a spectacular moment of frustration. If it didn’t work before, it definitely won’t now. Sound issues resolved, the band cracks on with a storming set, guitarist Ben Beetham and bassist Eddie Lewis bounding around the stage like fizzing firecrackers as Jack snarls into the mic. It’s all underpinned by thundering rhythms from George Macdonald behind the kit. Every song is a chant-along classic, although ‘Self Saboteur’ and ‘Glitterati’ particularly stand out for me. It’s all over far too soon, and the band will doubtless be straight into the van and heading for Margate. 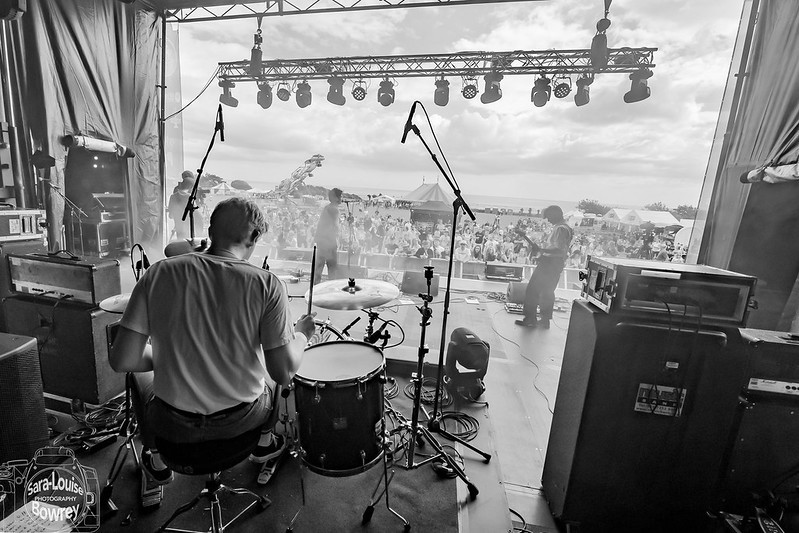 Fellow Hastings four-piece Blabbermouth tread a broadly similar path, combining guitar-based indie rock with a bit of youthful punk attitude. It’s their first gig on a festival stage, and they have had an enforced line-up change today, with regular bassist Alfie Rolph having to self-isolate. A dep called Liam, sporting a gloriously retro look reminiscent of Phineas from ‘The Fabulous Furry Freak Brothers’, has gamely stepped in and learnt the songs at short notice. You wouldn’t know, as the band sound tight and punchy, and have an utterly commanding presence that belies their relative inexperience. 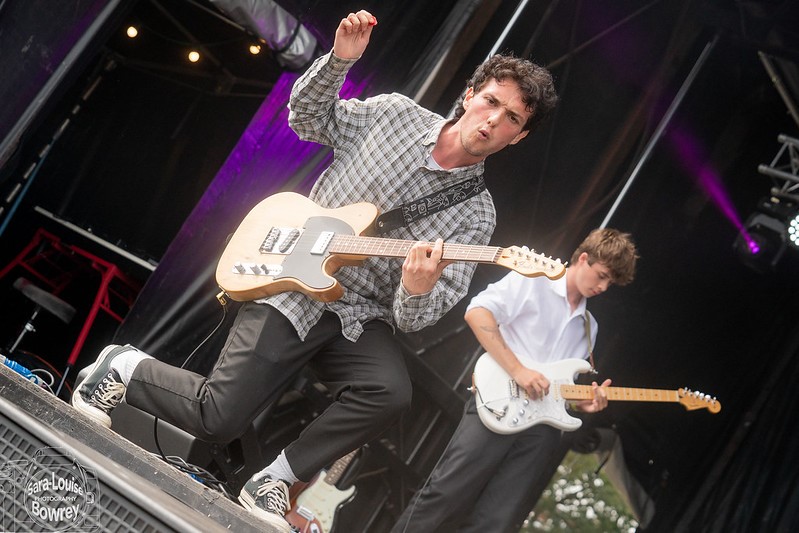 Singer and guitarist Max Williams oozes star quality, and flings himself around the stage with reckless abandon. Lead guitarist Leon Knowles looks worryingly like he’s wearing a school uniform, but wrangles stunning riffs from a white Stratocaster with confident swagger and consummate ease. Harry Giles sends brisk fills tumbling around the kit with power and precision. It’s a performance deserving of being higher up the bill, though I’m personally glad they played early and I could catch their set. The standout number for me was the recent single, ‘Razor Switchblade Smile’. 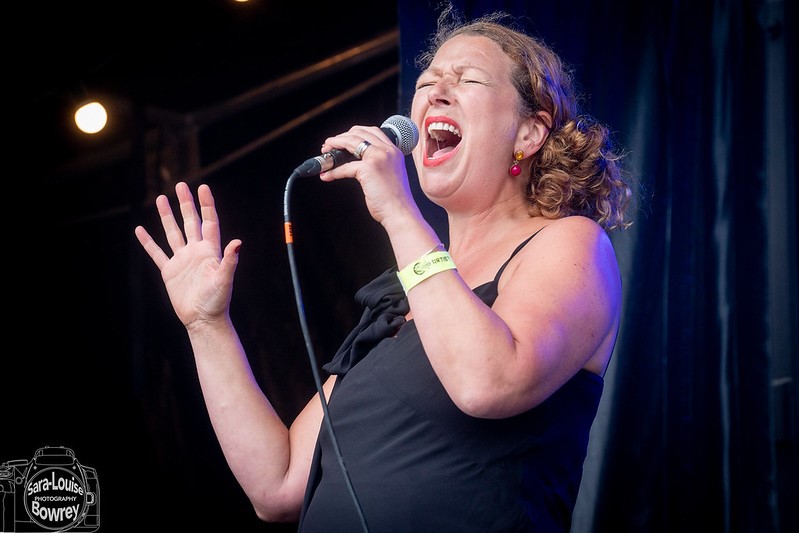 So from here on in, even though I was concentrating on getting tonnes of photos to document the event, it was back to me to try and say a few things about the rest of the show…so in no particular order and with brevity in mind here we go! 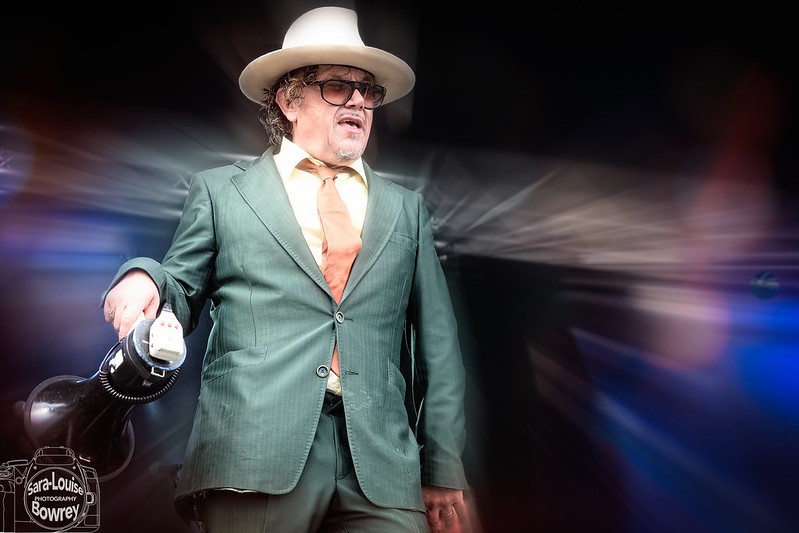 First off, it was hats off to The Savage 2nd Line band who brought a touch of traditional Mardi Gras to proceedings. Fundamentally no Hastings music event is complete without the presence of Dr Savage…and Ryan is always at his best when he has the Second Line guys behind him. 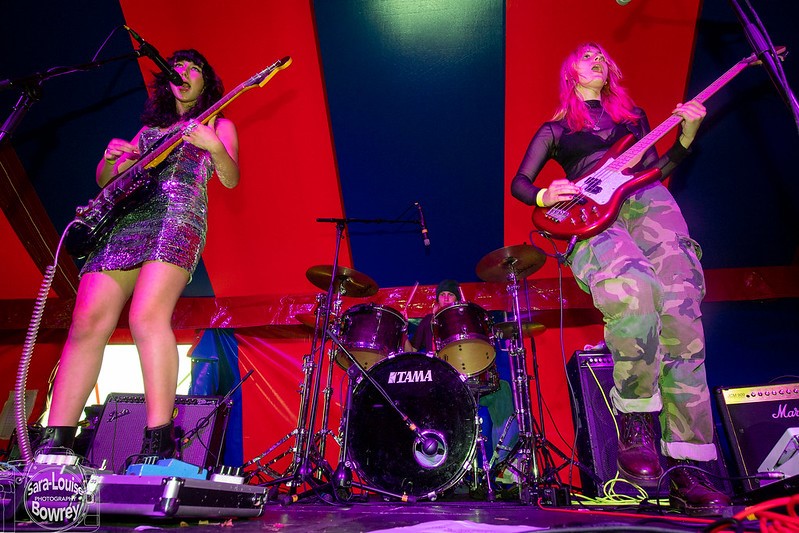 Hotwax were next up and stood out as a highlight for me. They really felt like they were coming into their own – every time I’ve seen them they have grown in confidence and force, and this was no exception. They’re playing Green Door Store soon, so go see them in Brighton…as well as at the De La Warr show where they are supporting the legendary Adrian Sherwood and Rhoda Dakar – alongside Ruts DC. 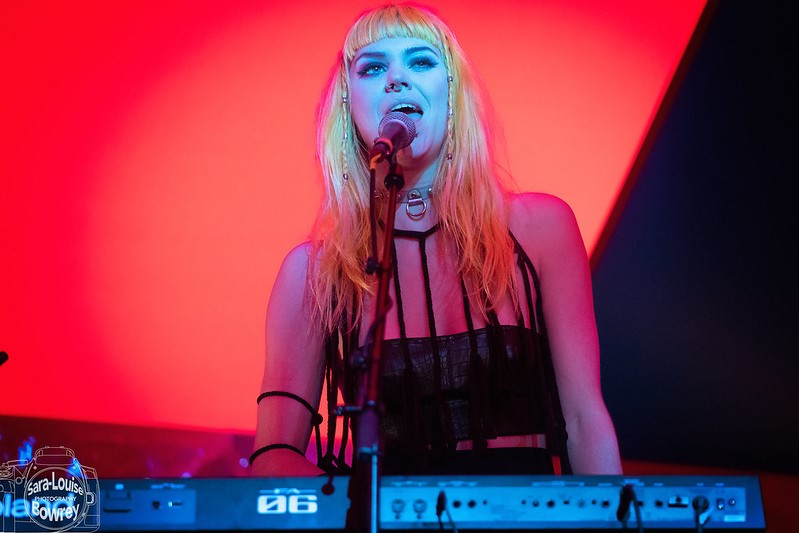 Then there was applause for Message From The Ravens (an absolute highlight for me) who offered up food for the soul with their heart wrenchingly beautiful harmonies. They sing songs of those lost stories that the Ravens have heard whispered over time. Their music has its foundations in pure emotion and leaves you at once both satisfied and wanting more. Floating away, you are at the same time drawn into their ethereal but familiar world. A space that envelopes you with a totally modern edge and love of life. 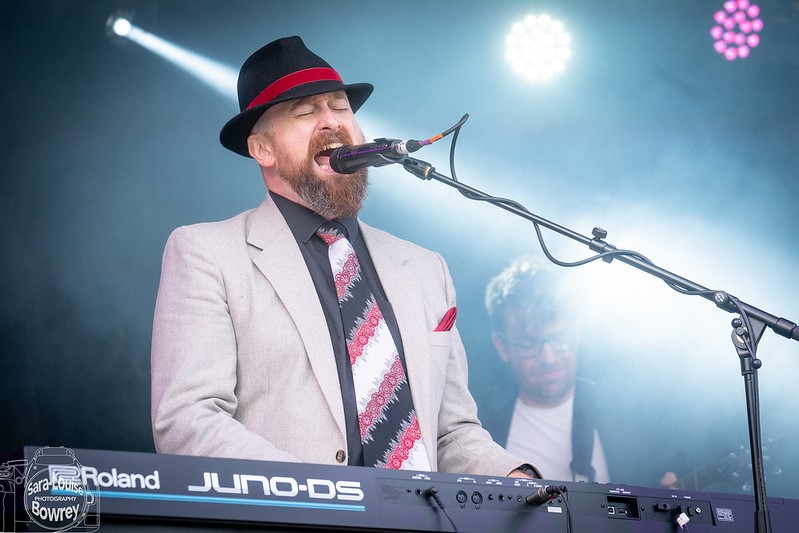 Rocketmen pulled out a brilliantly energetic Queen-set that the crowd loved and had a great sing-and-dance-along to. 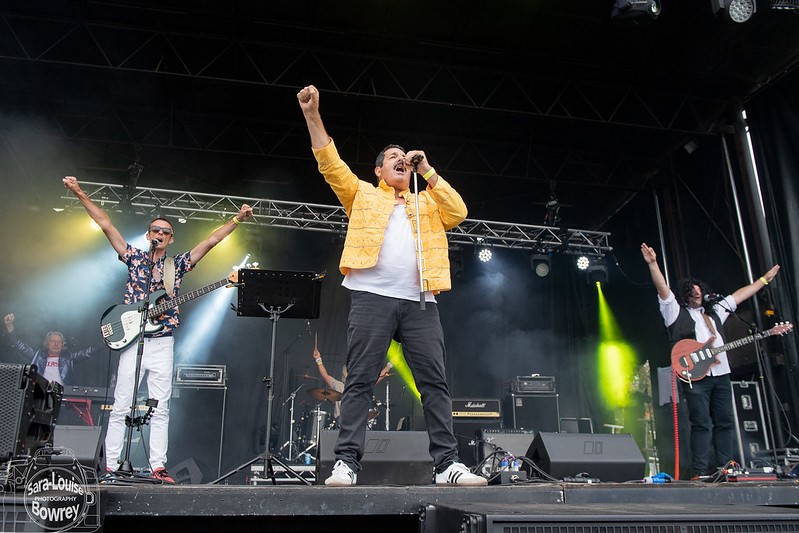 This merged into a stand-out set from Rufus Stone (featuring guest vocals from Helen Sharpe) which totally nailed how this town of ours is so lucky to have such talented musicians living amongst us. 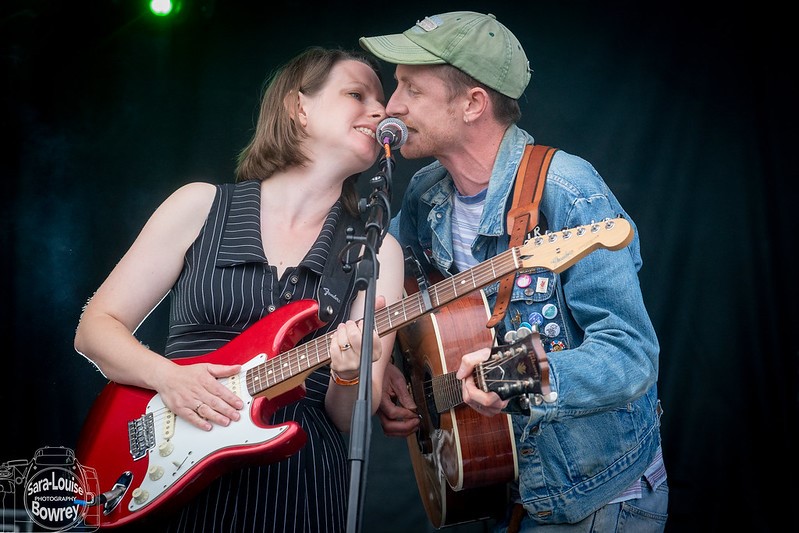 Rufus was followed by the somewhat more mellow sounds of the Trevor Moss and Hannah-Lou whose beautiful harmonies floating on the soft breeze and offered a delightfully chilled interlude before the energy levels were raised once more as the festival moved into it’s closing hours. 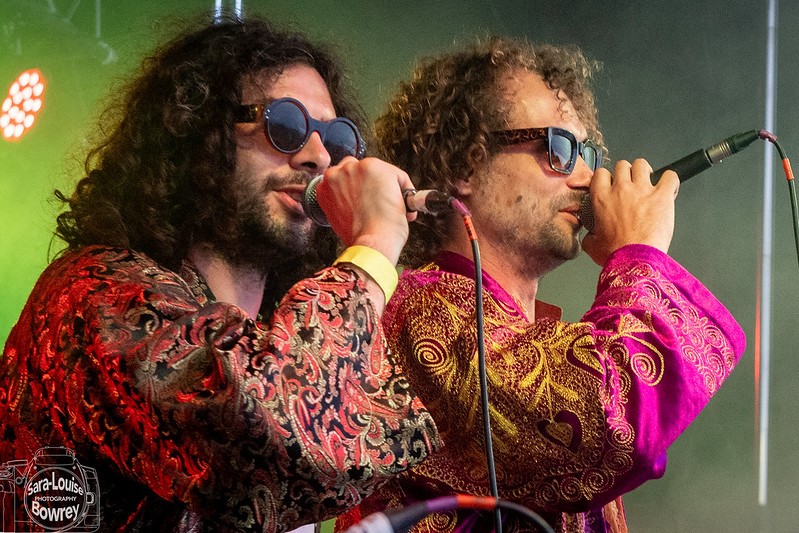 This saw the stage taken by Someone/Anyone and Buddha Triangle, both of whom played effervescent original sets, which generated energetic reactions from an appreciative crowd. 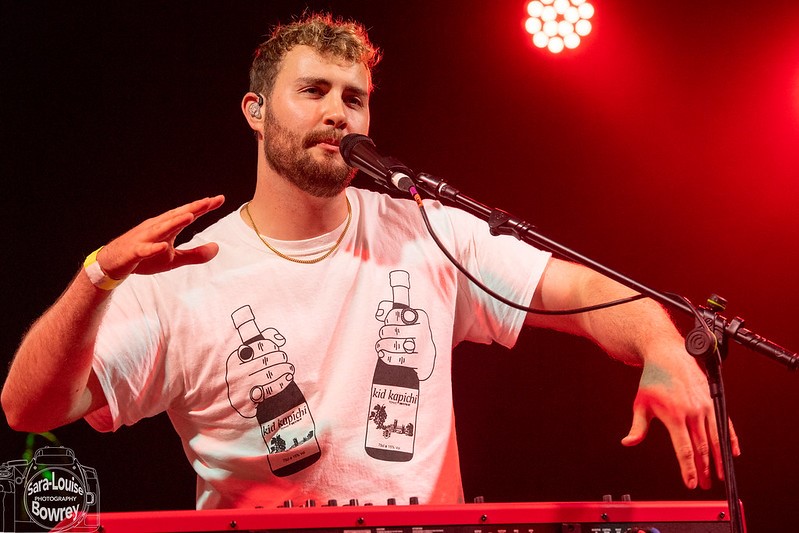 Sam Wills then pulled off his usual crowd-pleasing barnstorming set, and with his bright-eyed grandma right down the front he sparkled as the early evening light faded to dusk. 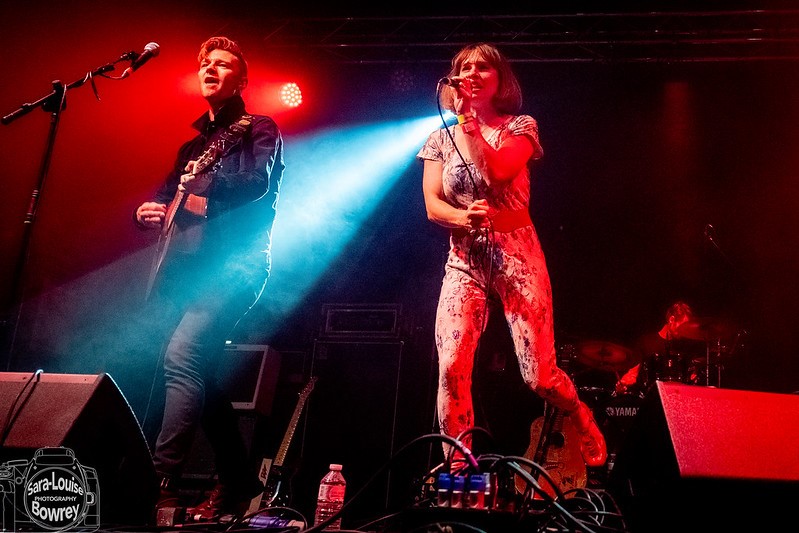 Then the stage gave way to the headline act, and Skinny Lister engaged the crowd as only they know how. Great songs and great energy – and predictably addictive…anyone who didn’t know them at this point walked away loving them. 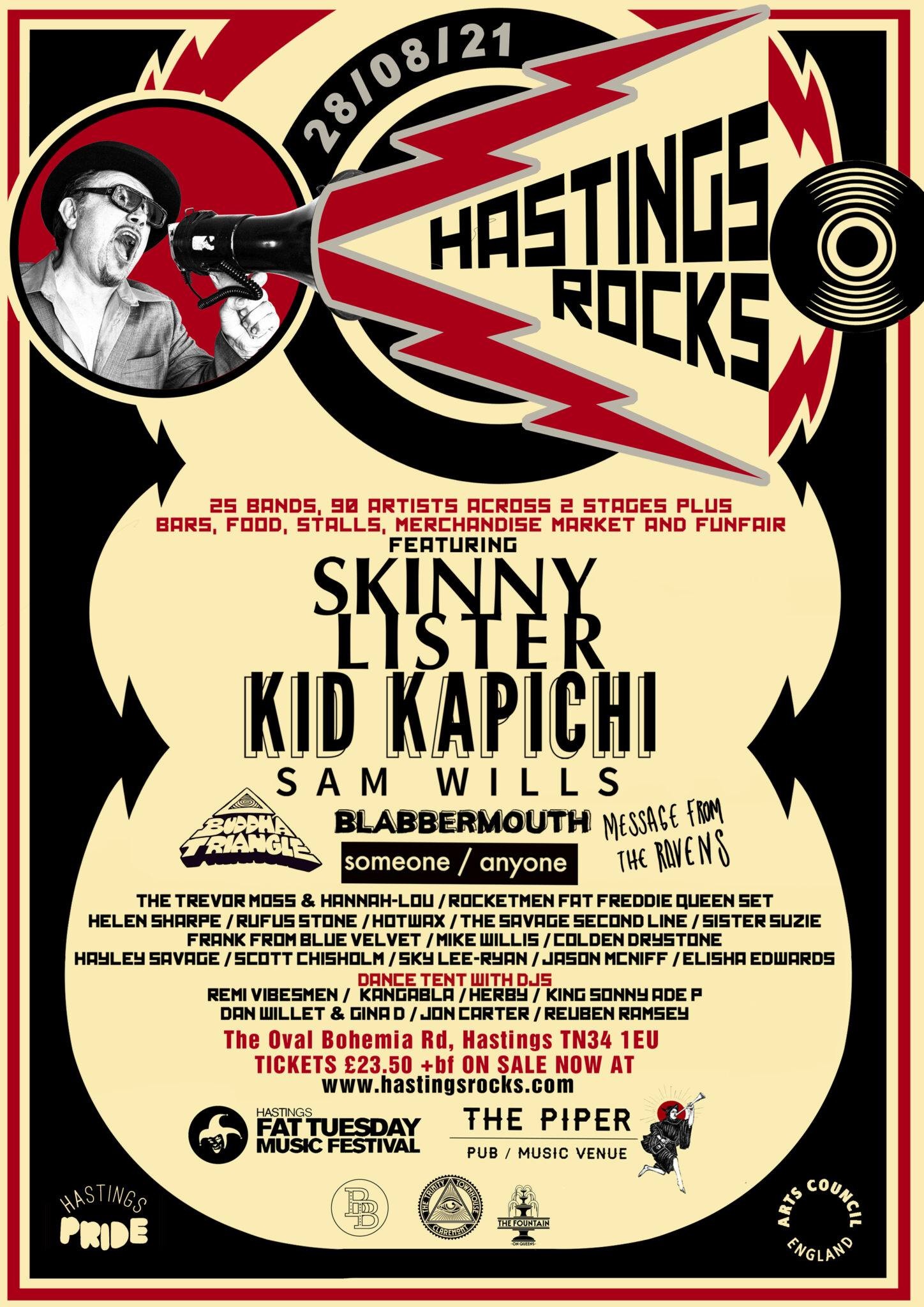 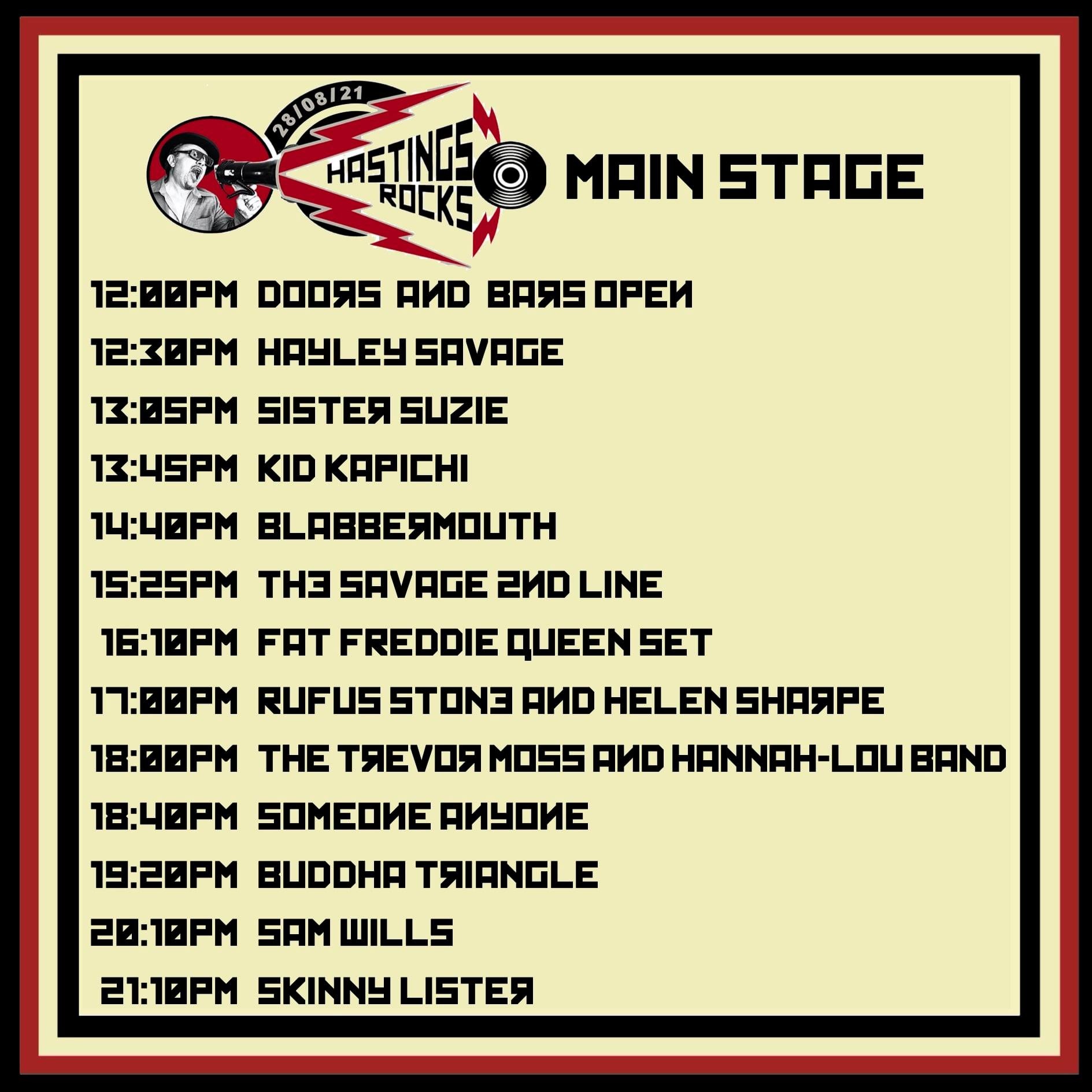 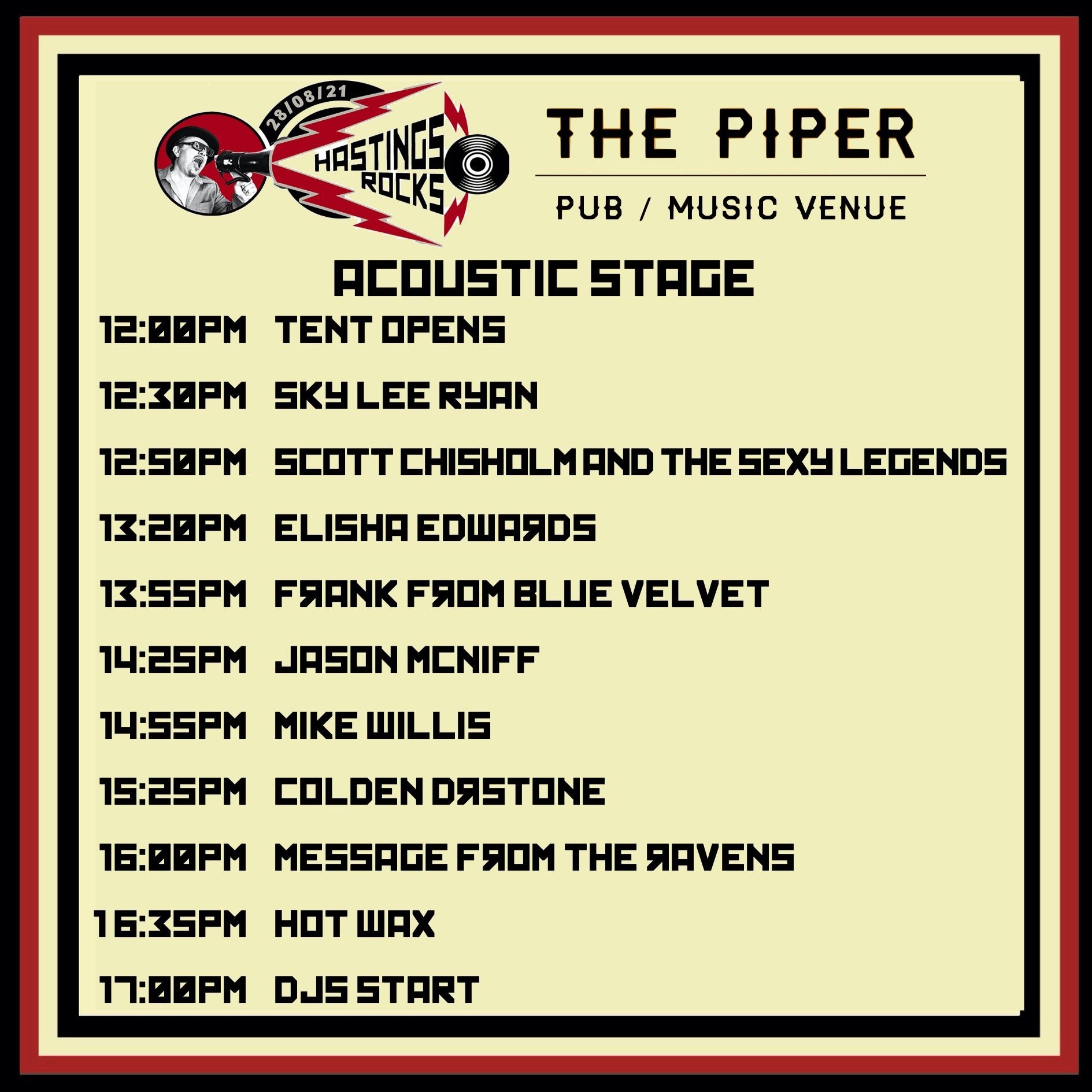