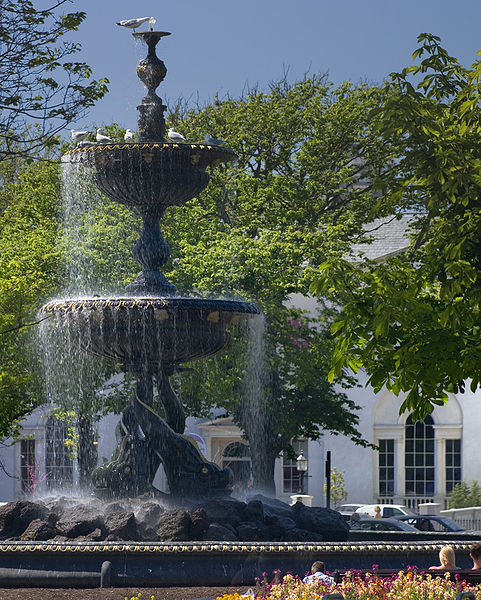 How the Victoria Fountain once looked

Residents living in the heart of Brighton are the end of their tether with the council, which is failing to get on top of the continuing issues of tents and anti-social behaviour in the Old Steine Gardens and not maintaining the area.

The Old Steine Gardens, with the stunning 1846 Victoria Fountain as its centrepiece, used to be the jewel in the crown of Brighton and a joy to behold for visitors and tourists alike.

Today though this area has become one of the most dangerous places in the city and a no-go area at night.

The fountain is switched off and is being used as a public toilet. There are constant issues with tents and campers.

Being at the centre of an area that includes the Royal Pavilion and the War Memorial, the Old Steine Gardens is the heart of Brighton and a reflection on the whole of our city and how it is managed.

The mounting problems are indicative of how far and how fast the state of the city is declining under the current council.

So how did it get this bad?

The area is pitch black at night, with nine out of the council’s ten lamps not working. Graffiti has been daubed on walls and rubbish has piled up on street corners adding to the sense of council neglect.

As the street scene and local environment has deteriorated, crime has risen in its wake. Over the past three years Sussex Police have recorded 149 crimes within the triangle formed by the Old Steine Gardens, War Memorial Gardens and Pavilion Gardens, including seven cases of rape.

Despite the broken infrastructure and rampant crime, the council has previously been uninterested in applying for infrastructure funding that would improve the situation. 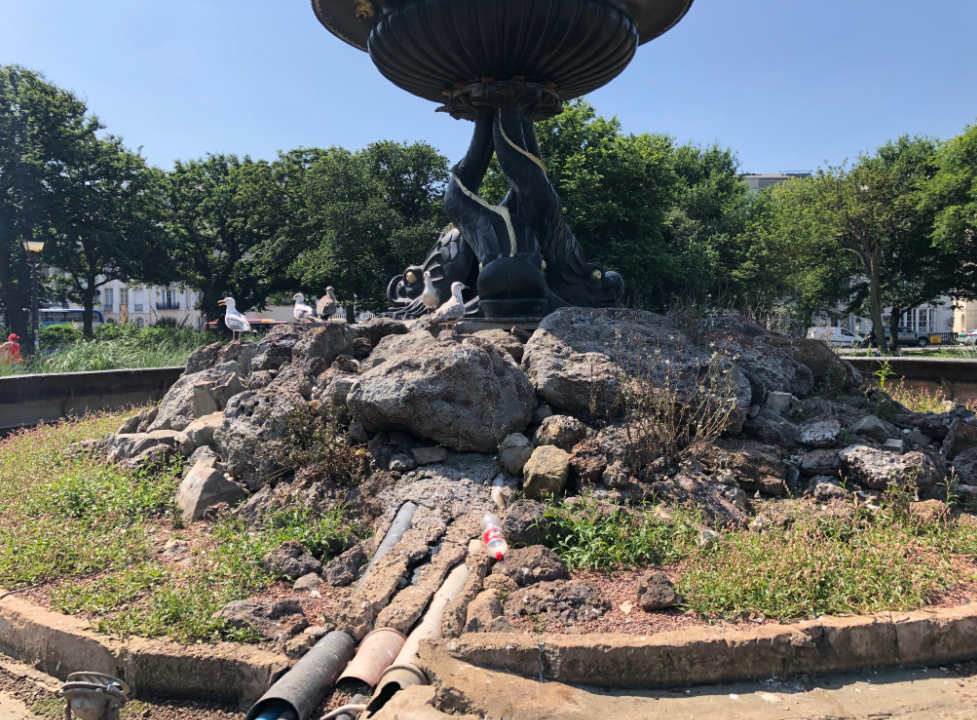 The Victoria Fountain this week

In 2019 Brighton and Hove City Council apparently declined an invitation to participate in a Sussex-wide funding bid for CCTV and lighting in Round 1 of the government’s Safer Streets Fund when invited to by the office of the Sussex police and crime commissioner. The city had been ranked as the authority most in need in Sussex and was invited to join the application.

Our council didn’t participate and our potential funding went to Hastings and Eastbourne councils instead.

Over the road from the Gardens at the Old Steine the council has neglected to prepare the War Memorial properly for important remembrance services, including VJ Day, when it was so bad with droppings covering the memorial that veterans’ feet got stuck on the paving when laying the wreath.

This caused so much upset to veterans that they had been forgotten – but the experience was repeated again this year when the Steine was left covered in algae for an important event.

Tents and the Homeless Bill of Rights

Amid this general neglect, this summer the council has once again not made any serious attempt to enforce the by-laws at Old Steine Gardens, allowing tents and encampments to set up at on the grass and then stay in place for weeks on end.

Alongside this, residents have reported street drinking, urinating and defecating in bushes, arguing, screaming and shouting and people passing out.

Even though the council continues to be given enough funding by the government to accommodate all homeless people in the city, as it has throughout the pandemic, there is a sense that the council has little interest in enforcing the by-laws that prohibit tents being erected on the Gardens.

In fact, the council has now voluntarily tied one hand behind its back by deciding to become the only local authority in the country to adopt a “Homeless Bill of Rights” which makes it harder for officers to remove tents from public grounds.

I spoke to a lady who was camping on Old Steine Gardens recently who had fled council accommodation that she had been placed in for her own safety because the building housed many anti-social tenants.

She said that she was now experiencing severe violence living in the dangerous Old Steine Gardens but the council was not engaging with her situation.

There can be no benefit to anyone from the council not enforcing its by-laws and allowing people to live like this in this environment that is within its care.

Every way you look at it, Old Steine Gardens and the surrounds are being neglected by the council and left to degenerate into a state of disrepair. It is quite frankly an embarrassment for the city.

Too much to bear

The situation has become too much to bear for one local resident and business owner living next to the Old Steine Gardens. After getting nowhere with his emails asking the council to enforce its by-laws, this week he emailed all 54 councillors.

In his email, this resident reminded every councillor that they have a joint responsibility to maintain the Old Steine Gardens as a key part of the tourist zone in Brighton.

In an attempt to hit home to councillors what the area was like to live in and run a business in, this resident provided a link to the reviews of Old Steine Gardens left by residents and tourists on Google.

One review summed up the state of the gardens with the following comments: “The council have neglected this space for too long. It should be a jewel but sadly it isn’t.”

The council needs to urgently get its house in order, enforce the by-laws, fix the lighting, switch on the famous fountain and return the Old Steine Gardens to their former glory.

To do so will require the council to have the courage – and the will – to enforce its own by-laws for the benefit of its residents and the city.

Councillor Mary Mears speaks for the Conservatives on housing on Brighton and Hove City Council.