The Vaccines ‘Back In Love City’ tour gig report 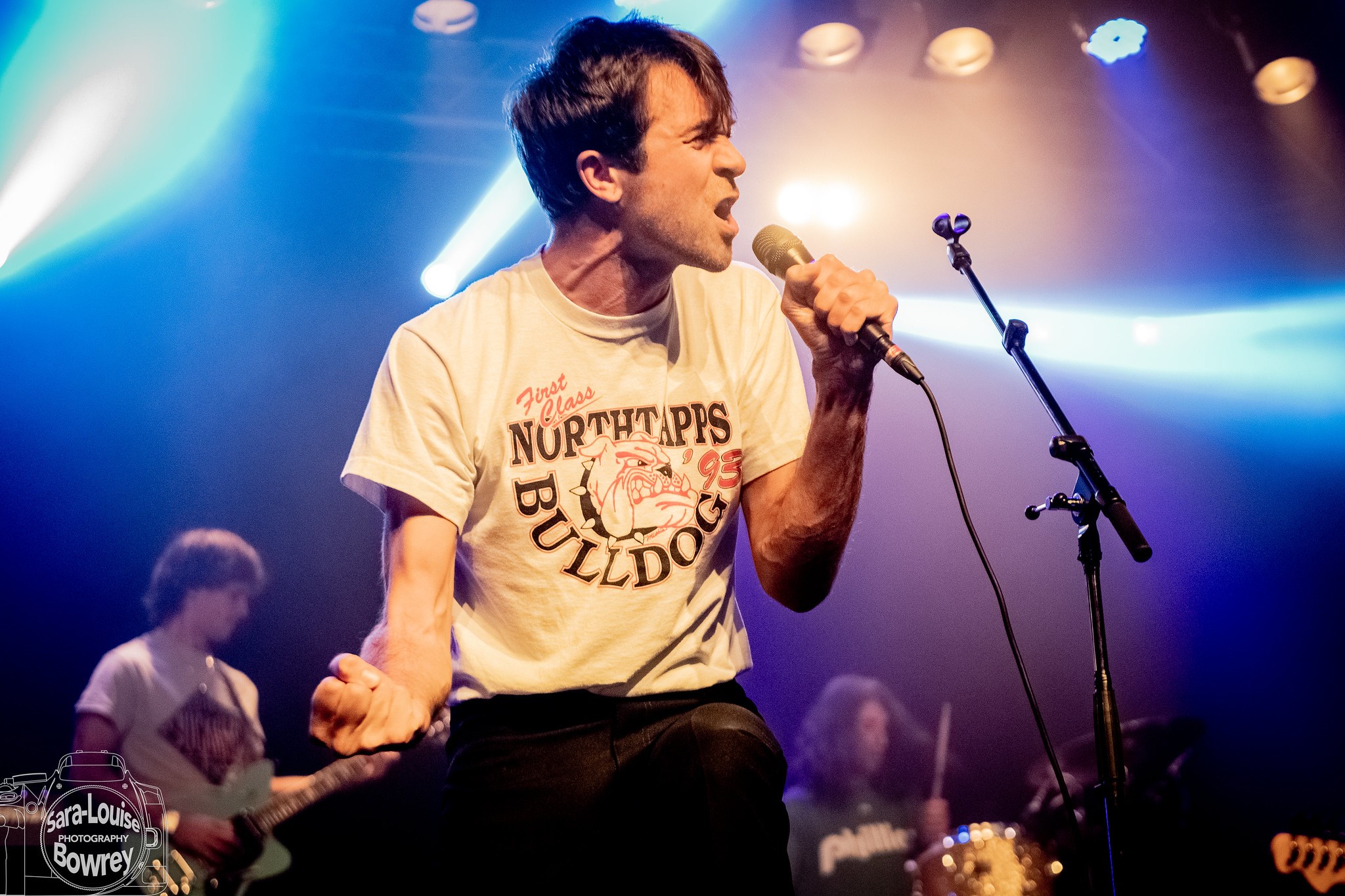 I first saw The Vaccines at the Reading festival in 2018. I say saw in the loosest sense of the word because being a short girl in a big crowd means I didn’t actually see anything! It was nice to actually get to see The Vaccines this time around, having a barrier view at the iconic De La Warr Pavilion in Bexhill. The Vaccines are playing a sold out show at the Concorde 2 on the 3rd October, and I wanted to check them out in Bexhill prior to the show. 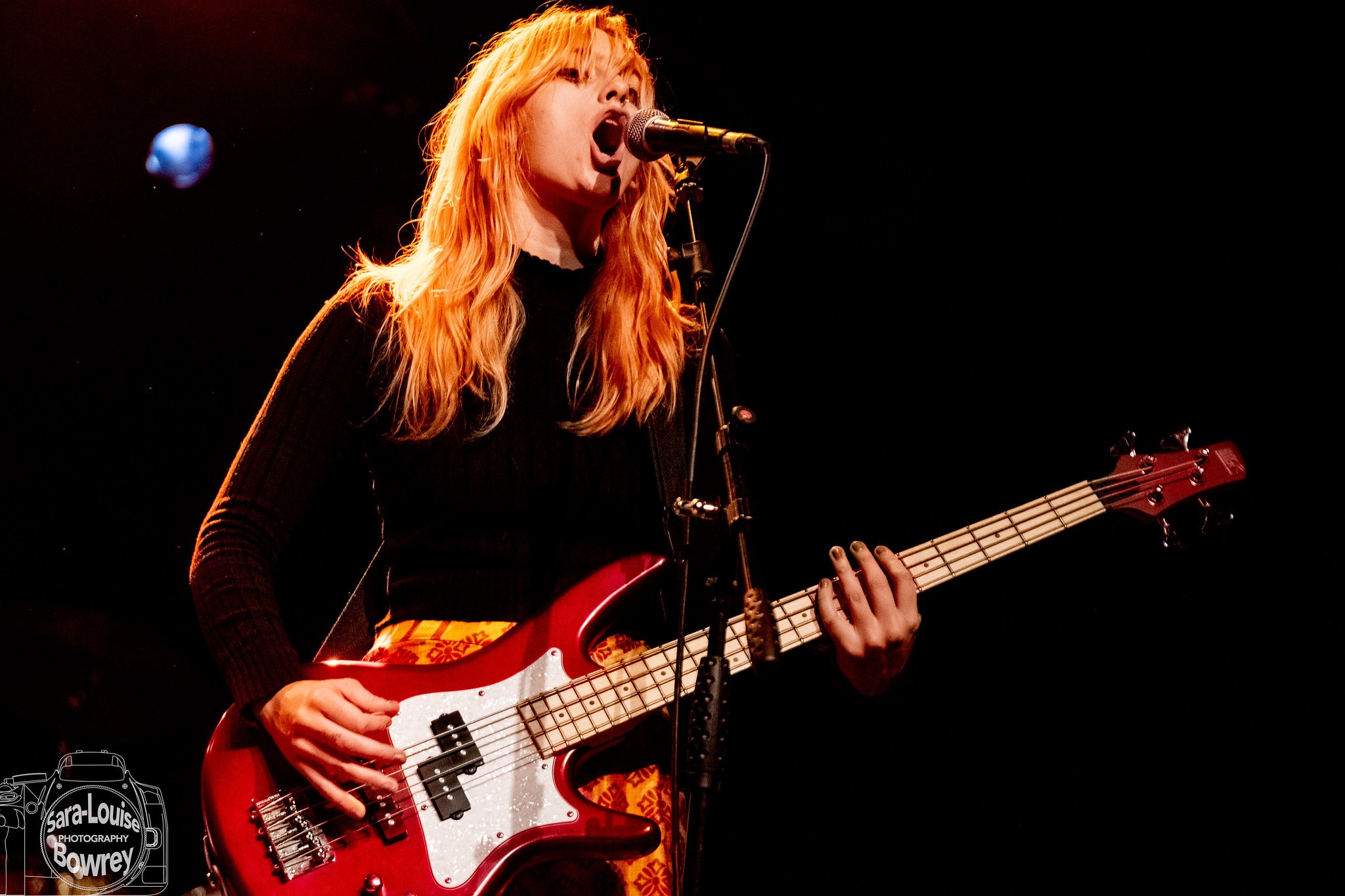 The night opened with HotWax, made up of Tallulah (vocals and guitar), Lola (backing vocals and bass guitar), and Alfie (drums). HotWax met at school and played their first gig in October 2019. They’ve supported musicians such as Kid Kapichi, Ruts DC, and Adrian Sherwood. Their recent releases played on BBC Radio’s ‘Introducing the South.’ My dad had raved about Hotwax (he even has a band t-shirt) so I was looking forward to seeing what the hype was about. 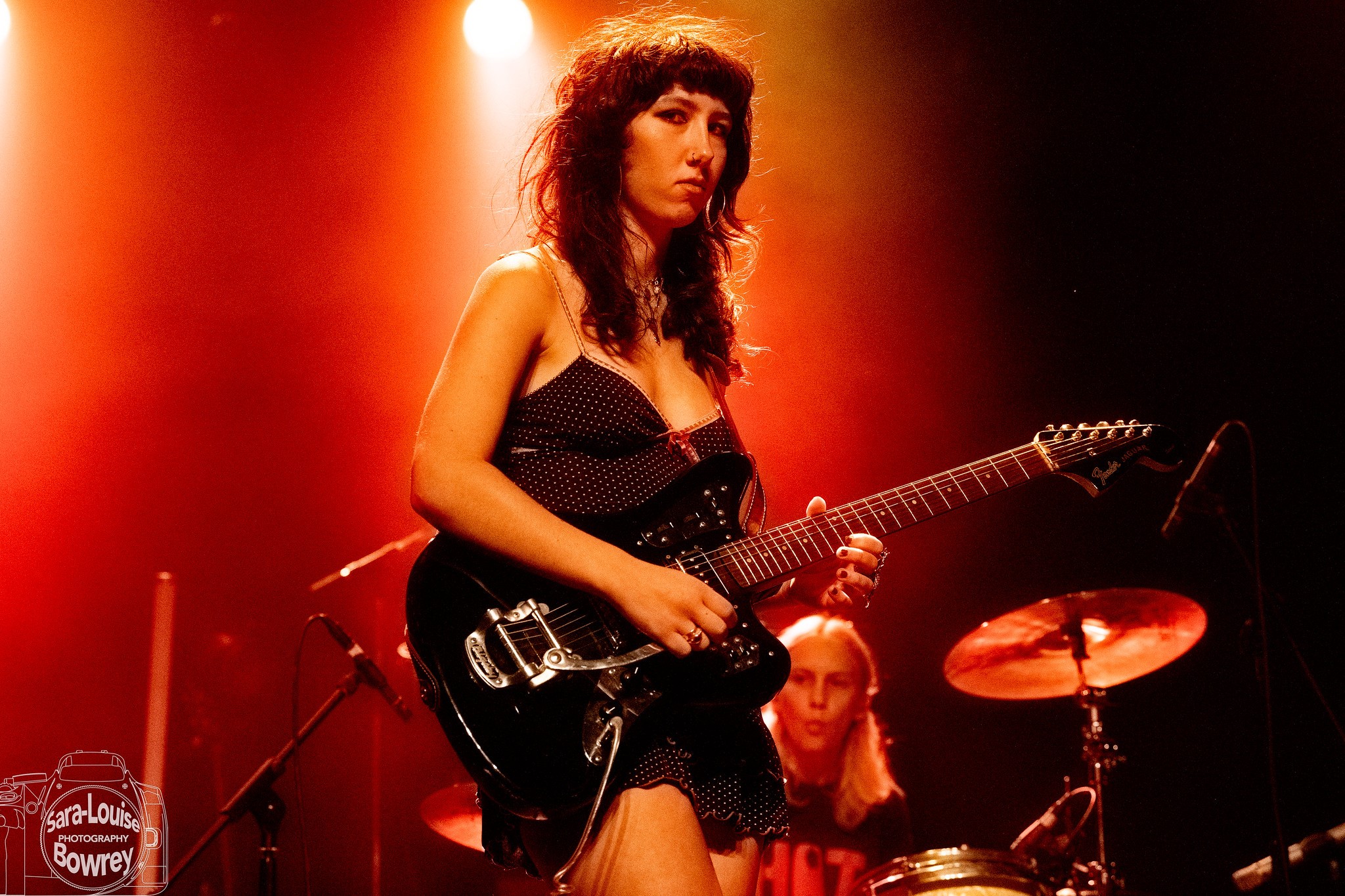 Their set opened with ‘Stay Cool’ and straight away I knew I was going to enjoy their set. Their psychedelic rock sound was unique and captured my attention instantly. The lyrics to ‘Stay Cool’ were emotive and it was original to hear these kind of lyrics with rock vibes. The night came alive when they played their new single ‘Drop.’ ‘Drop’ was my favourite song of the night and I’m looking forward to seeing it on Spotify so I can stream it on repeat! Their chemistry made it easy for the audience to become absorbed in their music; there’s nothing like electric guitars, drums, and hair flipping to get an audience moving! 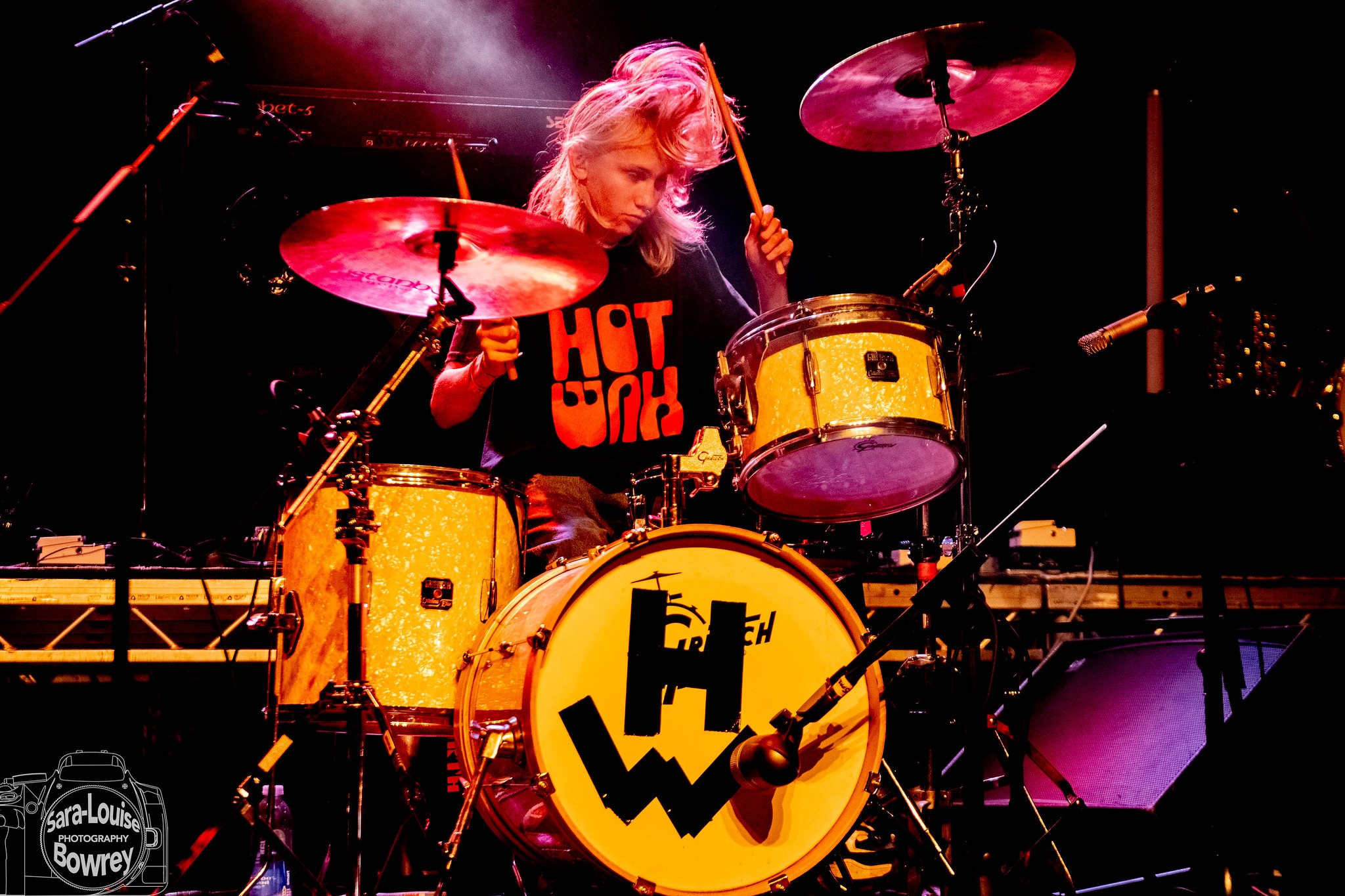 Their songs all varied in sound and speed and I enjoyed the tone change when they slowed things down with ‘What’s That Sound.’ The set ended with ‘Zooarmy’ and the crowd was left warmed up for the rest of the evening. Each member of the band knows their instrument well and they’re all incredibly talented musicians and lyricists. I thoroughly recommend keeping your eyes open for Hotwax concerts in the local area; they’re going to take the music scene by storm. Catch them at The Piper in St Leonard’s and Hope & Ruin in Brighton on Saturday 2nd October, and stream their next single ‘Keep Coming Back.’

Find them on Spotify HERE. 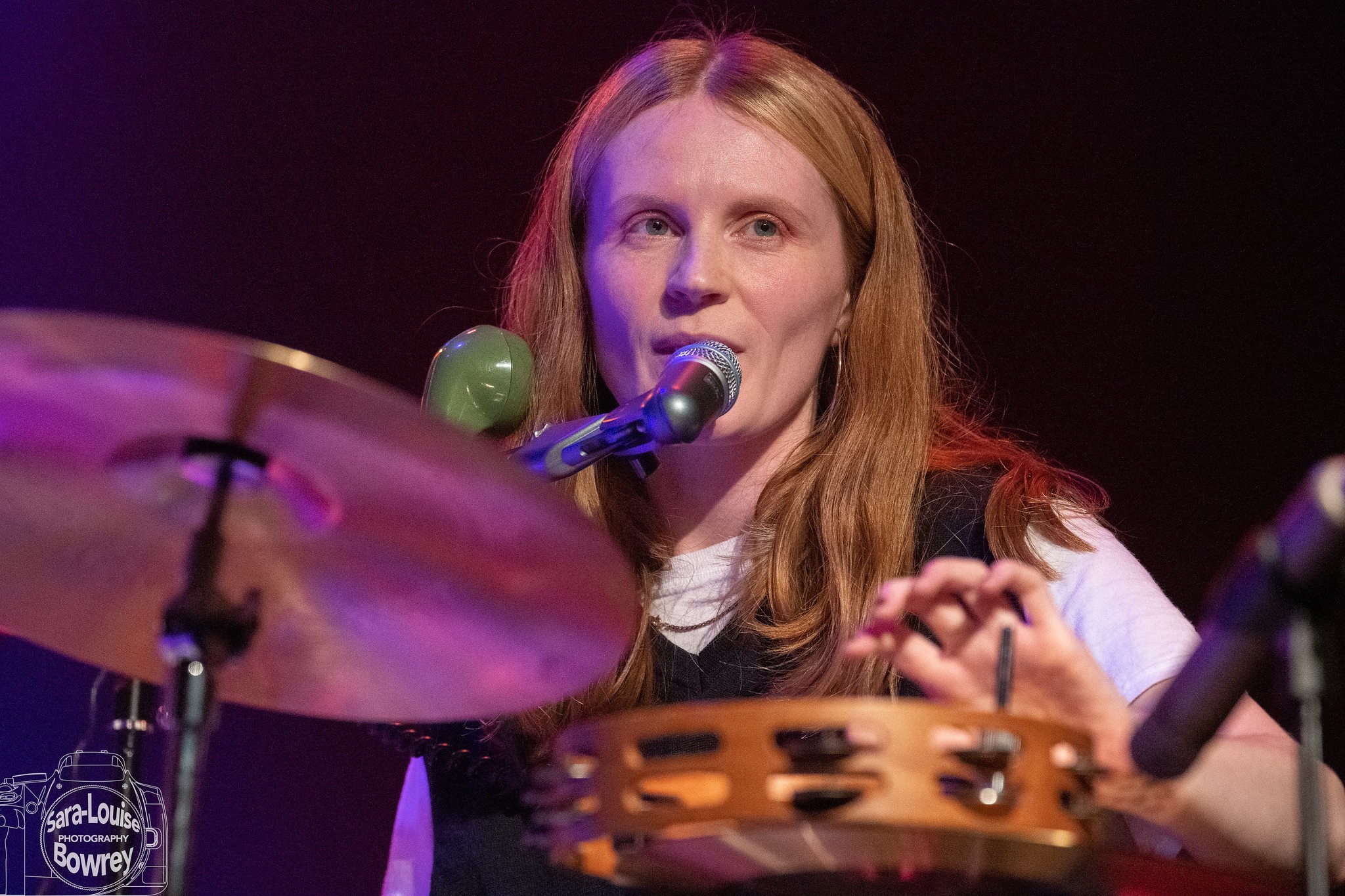 Next came BSÍ, Icelandic punk band formed of Silla Thorarensen (drums and vocals) and Julius Pollux Rothlaender (guitar). They released their double sided ep ‘Sometimes Depressed… But Always Anti-Fascist’ in 2021. Their sound transcends usual musical binaries. The band, named after a central bus terminal in Reykjavík, were formed by trying instruments they didn’t know how to play, and flourished from there. They challenge oppressive social structures through a mixture of sounds: some sad and some riot grrrl style songs.

The stage was set with drums and an electric guitar and I was taken aback when drummer and lead vocalist Silla started singing as her voice was much softer than anticipated: she has a brilliant voice and the audience were in agreement judging by their reaction. 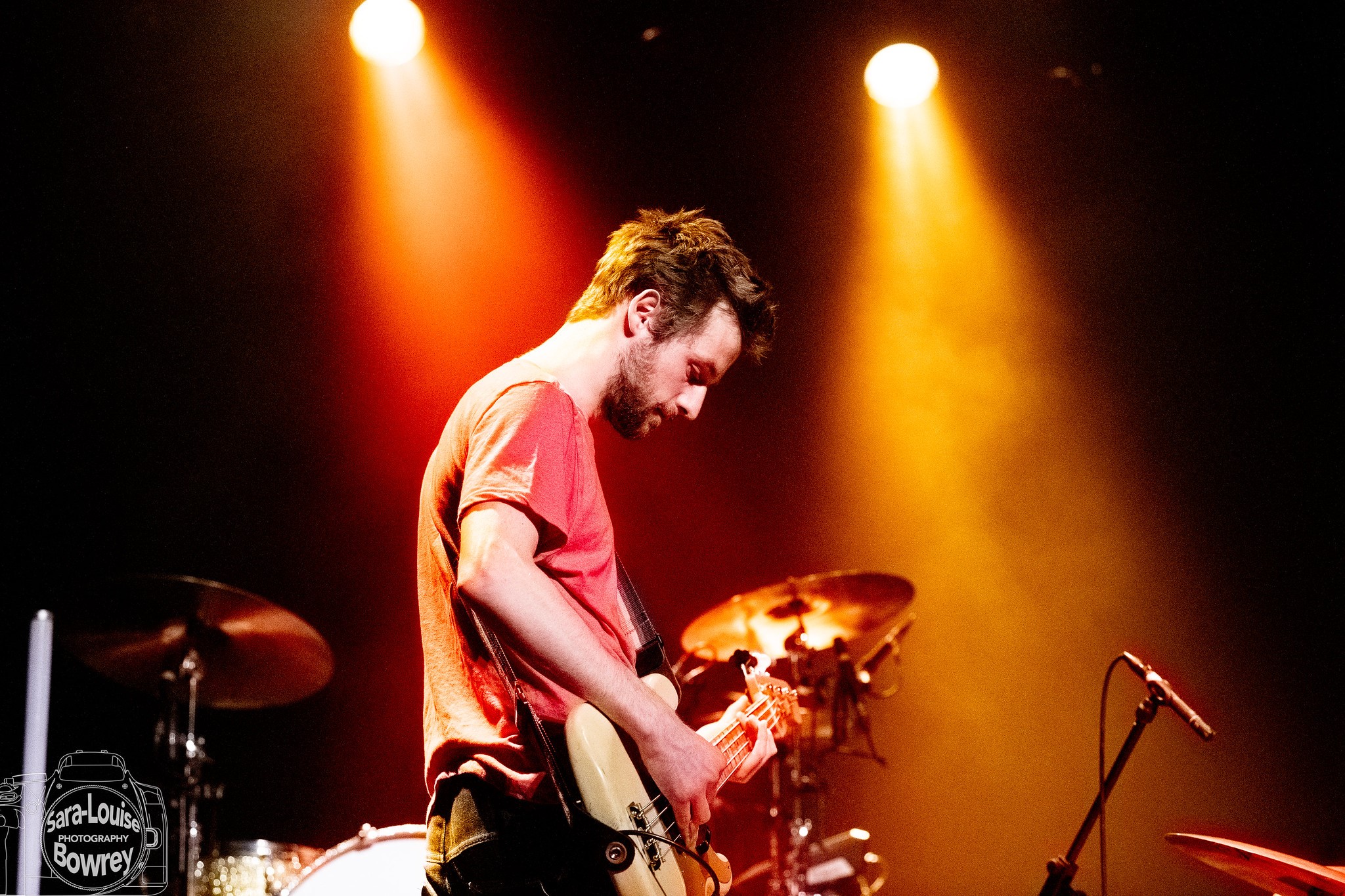 The staging was clever, and they paid attention to the little details: one of the microphones was an old-style telephone which was very quirky and original. Julius took his boots off when they came on stage and it was almost surreal watching him play in socks. I knew the band’s vibe straight away when noticing Julius’s electric guitar had “no borders” written in red tape across the neck.

For me, the set came alive when they played a cover song. They introduced it by saying that they’re doing a cover which we might recognise. They started and I didn’t recognise it at all, so I assumed it was a song I didn’t know. Suddenly the chorus hit and I recognised it instantly when they sang “if you wanna be my lover, you gotta get with my friends”. I was so shocked—as someone who grew up as an avid fan of the Spice Girls, BSÍ’s cover was so different that I didn’t recognise it. I absolutely loved the cover; it was a quirky take on the original and was very emotive. Their musical talent shone through here as they made a classic party tune their own punk song. My favourite song of the night was ‘Dónakallalagið,’ the perfect song to put your middle finger up to, in Silla’s words, the “misogynist creeps” and against toxic masculinity. The audience cheered at that and the song went down a treat. 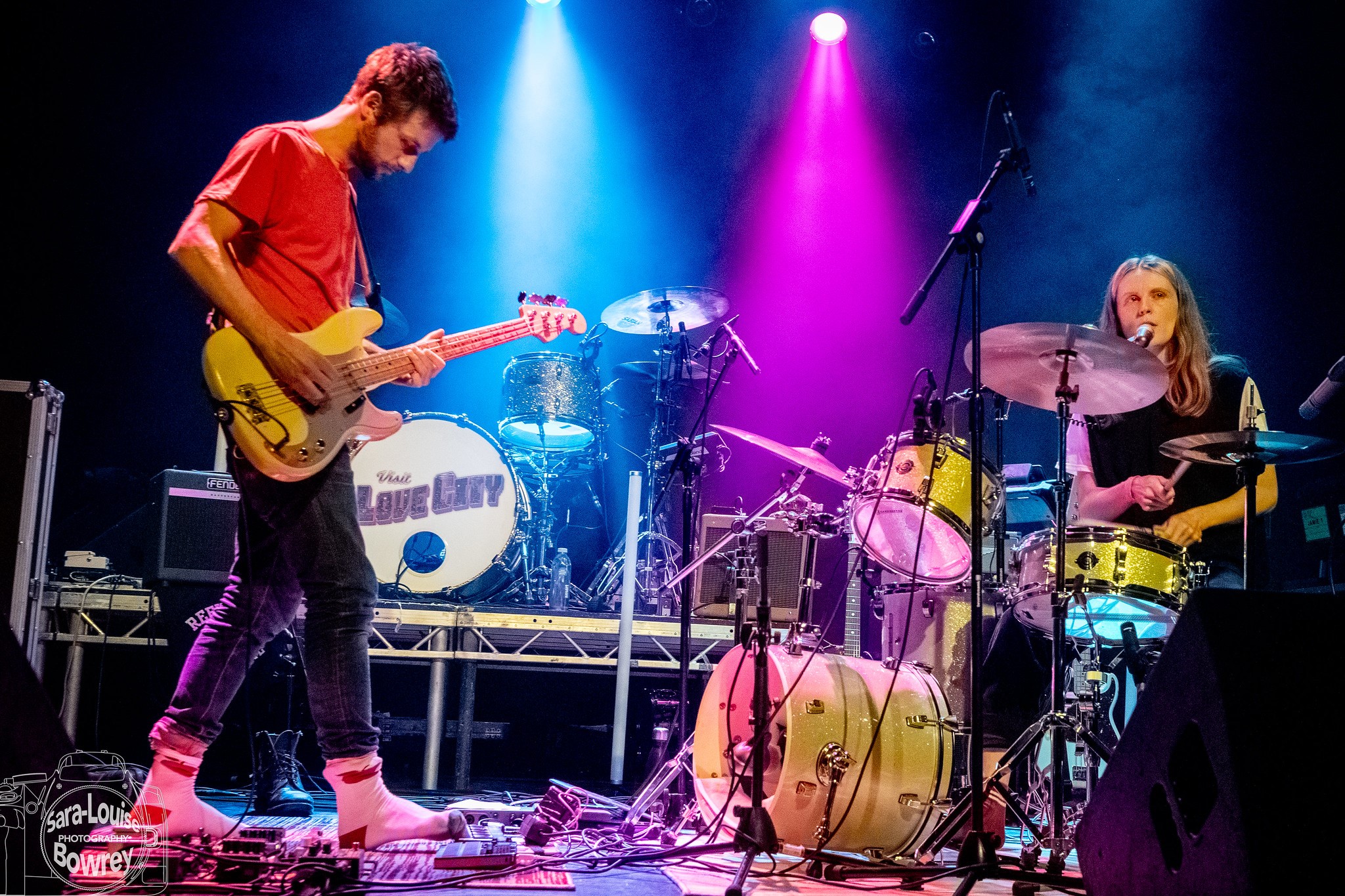 I’m very much into euro-rock at the moment and I plan on seeing BSÍ again when they next tour. Their new EP ‘Sometimes Depressed… But Always Anti-Fascist’ is a powerful release which evokes that punk energy against the system. It’s a no skip album for me, which is a sign of real talent. 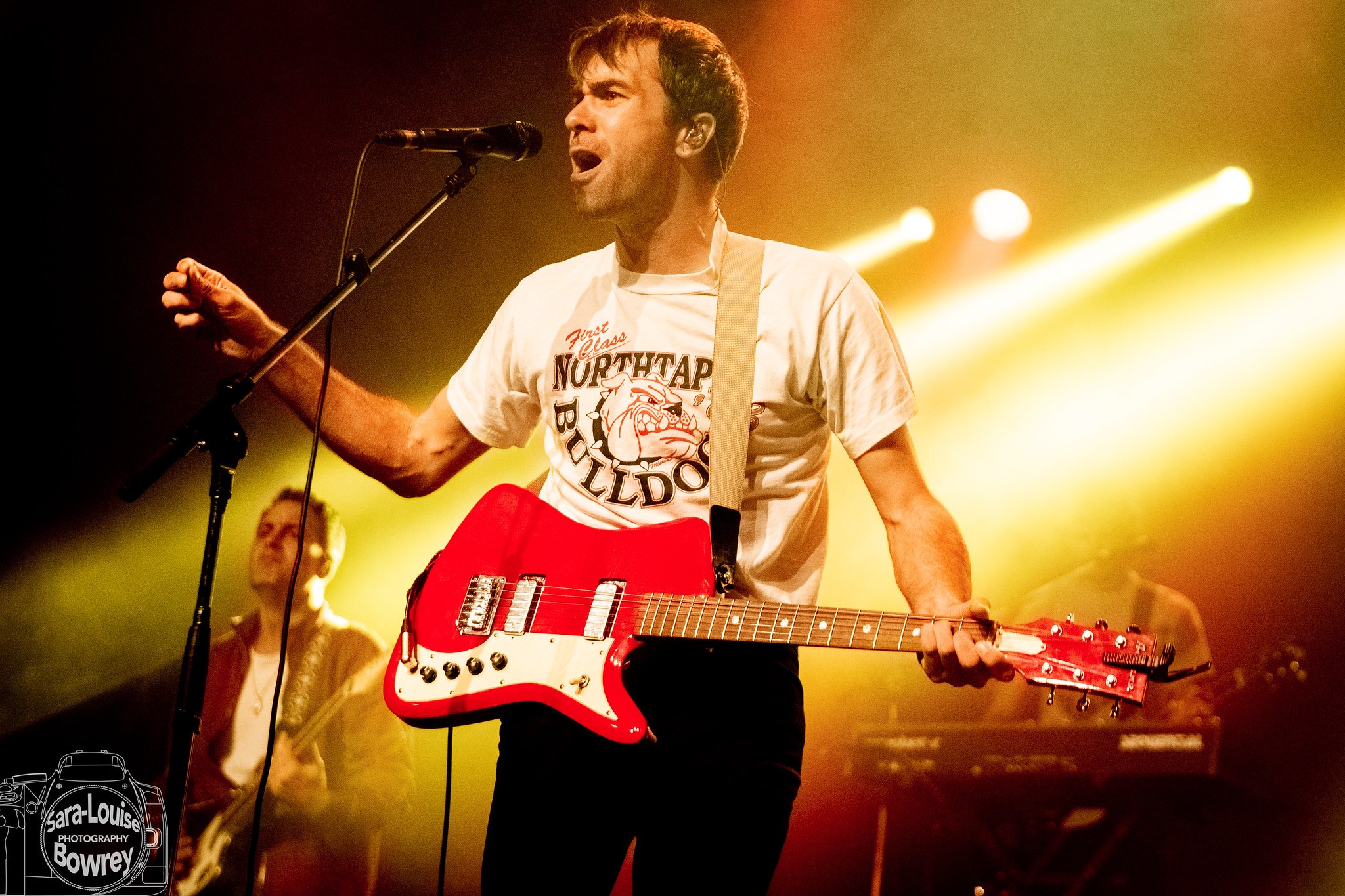 Then came The Vaccines, who entered the stage to a classic Black Eyed Peas song, which took me by surprise. The Vaccines are an indie-punk band consisting of Justin Hayward-Young (lead vocals and guitar), Freddie Cowan (lead guitar and vocals), Árni Árnason (bass and vocal), Timothy Lanham (Keyboard), and Yoann Intonti (drums). 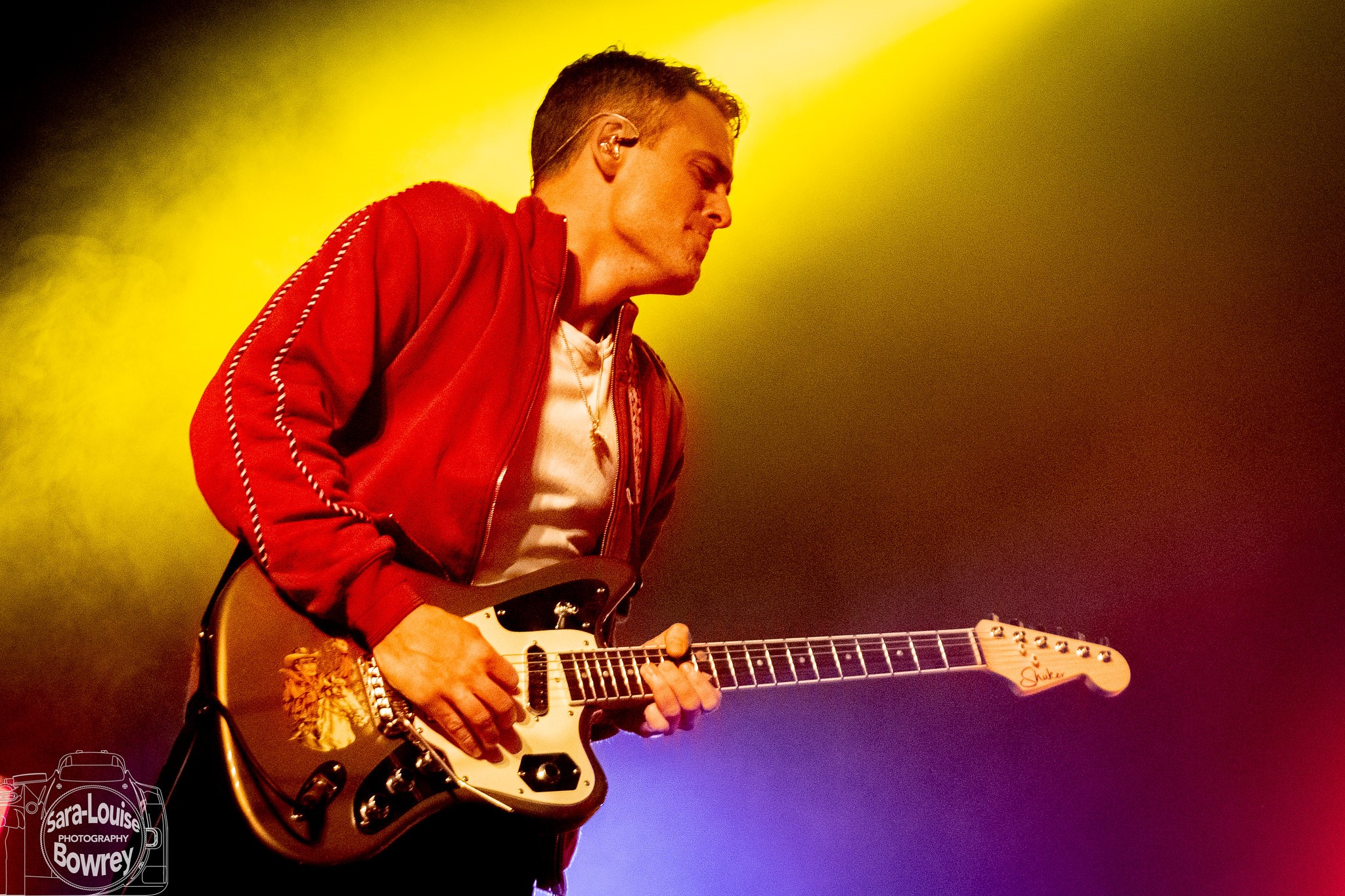 The atmosphere was intense from the offset, and the crowd kicked off during the first song ‘Wonderlust.’ The energy the band brought was great; I felt like I was making eye contact with lead singer Justin and his intensity made me feel as if I were the only person in the room. I was in awe of him and I still can’t work out how it’s possible for a man to move in the way he did! 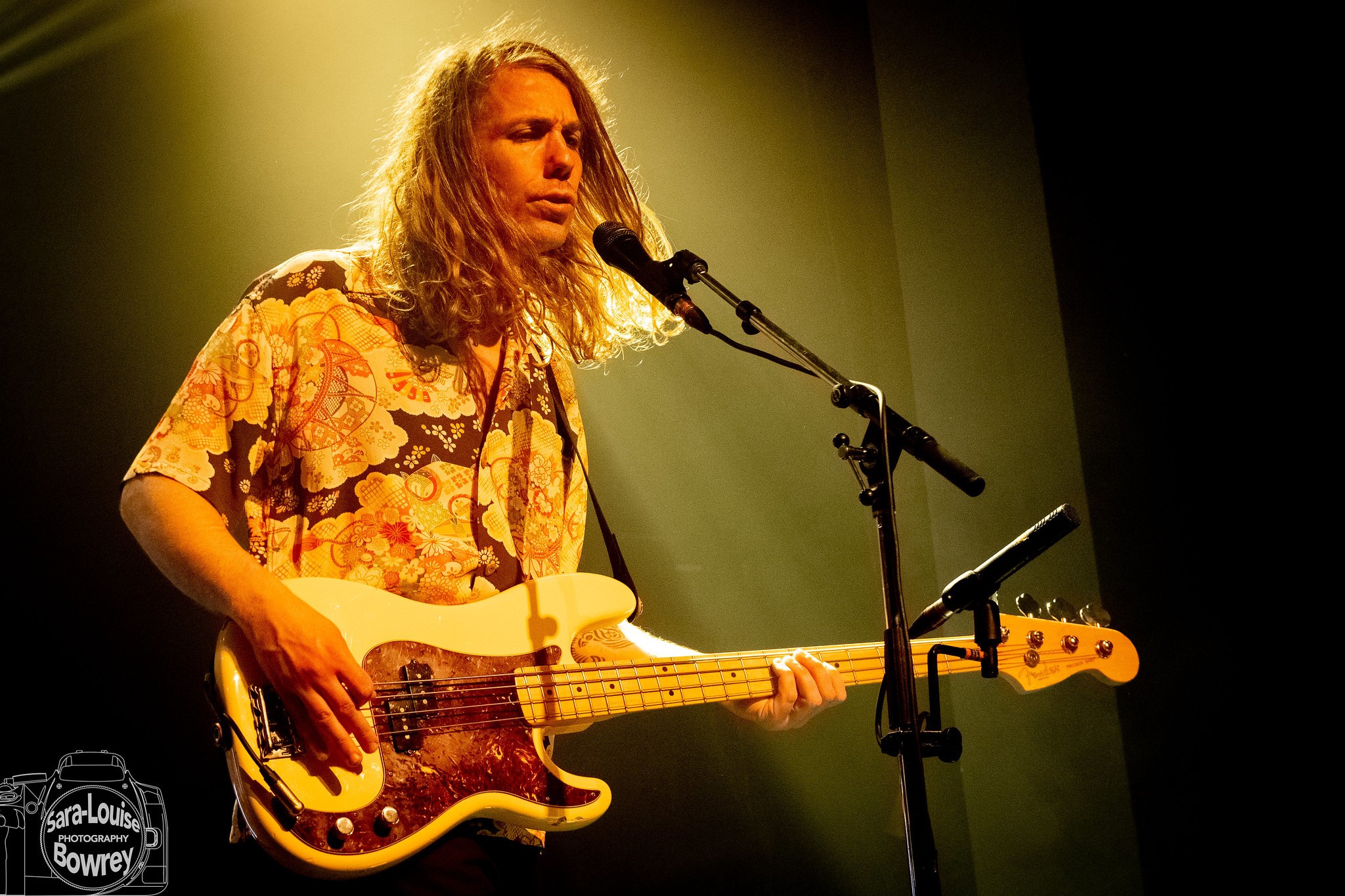 The lighting and staging were perfect. It was minimalistic with beautiful lights which changed colour as the tone of the songs changed. It made me laugh when Justin picked up one of the light sticks and waved it around like a Lightsaber! It definitely seemed unplanned which is the beauty of The Vaccines—they perform in a way which feels right in the moment.

When they played ‘Wetsuit’ I couldn’t help but feel it was appropriate for the seaside town of Bexhill. The band got the balance between fast and slow songs perfect and Justin gave the audience many an opportunity to sing the lyrics back to them. ‘Wetsuit’ is such an iconic song and it was great to hear it live. 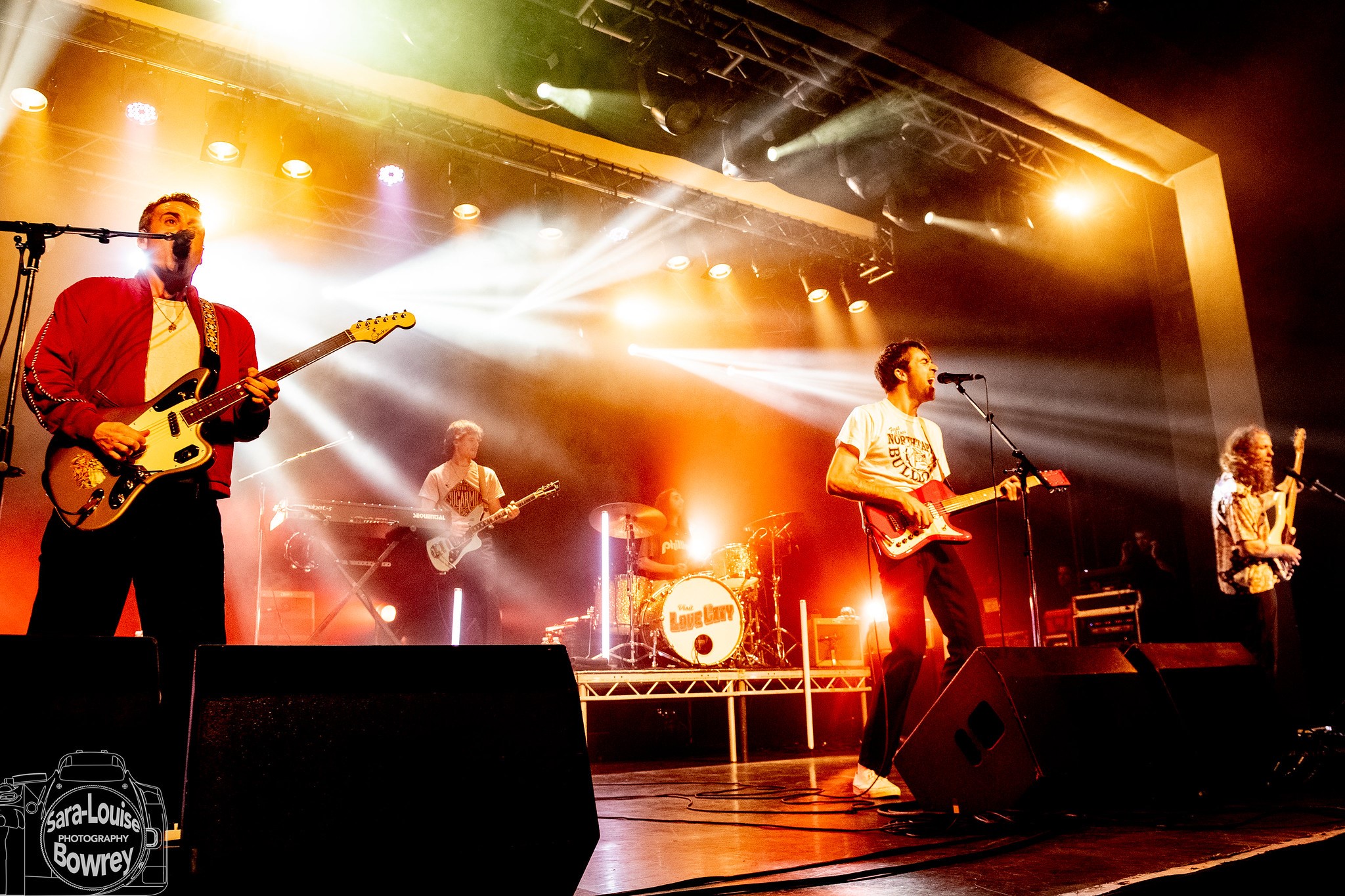 The whole crowd went wild for ‘Post Break Up Sex’; I was glad the atmosphere was buzzing as it’s my favourite song by The Vaccines. The red lighting and dancing from the band made the audience want to jump and dance. The little vocal twists Justin put on made the performance special as it had a slightly different sound to the studio recorded version. For me, this was the highlight of their set.

Their performance of ‘El Paso’ really took me by surprise; for me it had been a song I skipped over, but their performance was so emotional that I’m now obsessed with it. That’s the power of seeing music live—the performance really made the song. It fit into the set perfectly, it was a good change of pace which gave the audience time to breathe and get lost in a slower song. They moved on to ‘Headphones Baby,’ another slower song with lyrics which are perfect for screaming along to. 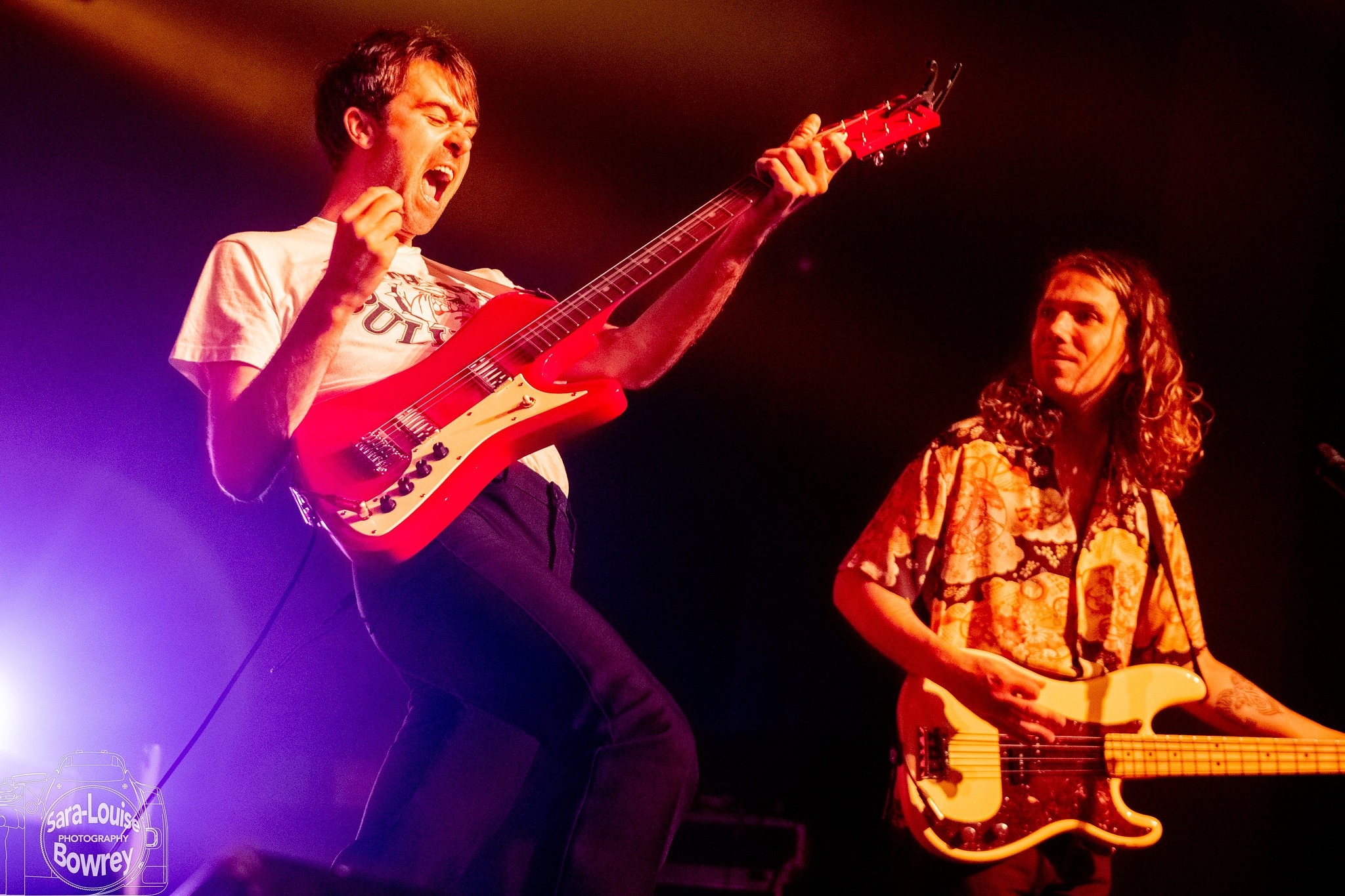 When they played ‘All My Friends’ the audience were singing at the top of their lungs. ‘All My Friends’ is another one of my favourite songs and I felt so lost in the moment, as did those around me. The crowd swayed along to the tune and it was a lovely moment of closeness between fans of The Vaccines.

The encore had the crowd dancing and singing, and no one wanted it to end. It was lovely to see the rest of the band dancing around together behind Justin. They’re all great showmen and it shows in the way they interact with each other. There wasn’t much audience interaction, it was mainly a series of iconic songs and a lot of dancing. The Vaccines have so many great songs, and if you’re in Brighton on 3rd October I and going to their sold out gig then you are going to have a great time. 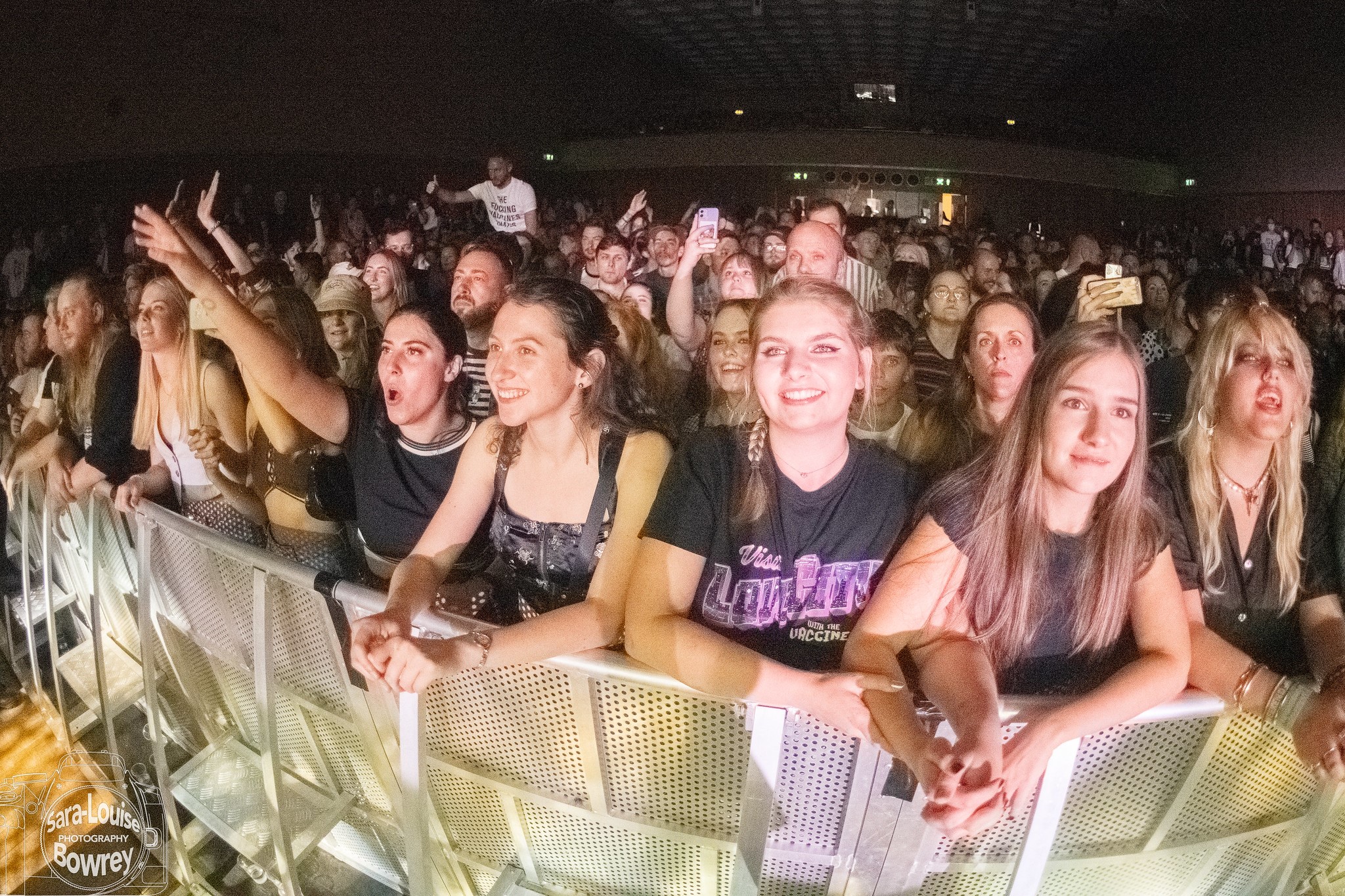 More information on The Vaccines can be found at www.thevaccines.com 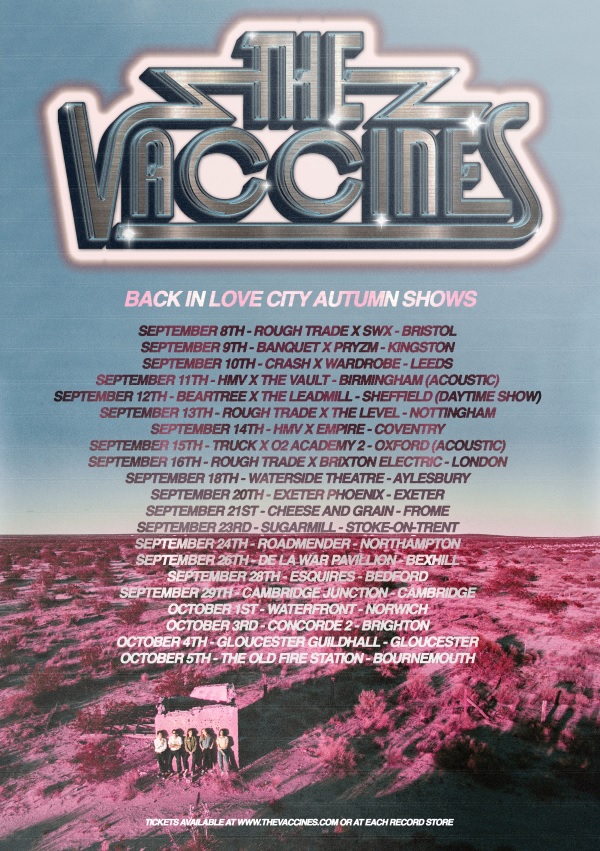