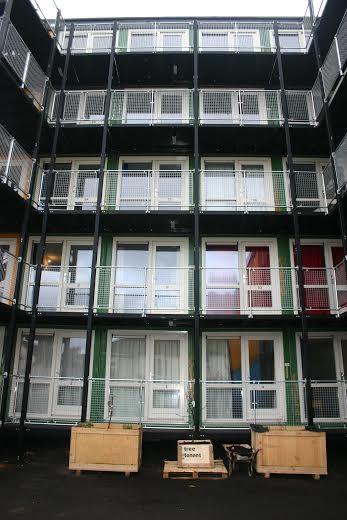 A developer’s plans to build affordable housing on a plot currently used to house homeless people in shipping containers are set to move a step closer this month.

QED Estates wants to lease the council-owned part of the Richardson’s yard scrap metal merchants and the former Cobbler’s Thumb pub for 250 years.

It already owns the freehold of the other half of the site, which is home to the 36 shipping containers used by BHT Sussex.

Brighton and Hove City Council officers have recommended the Policy and Resources Committee recommend the lease when it meets next week.

The containers have temporary planning permission until 7 May, 2023, when the land must be cleared. Last year, BHT said it would work with the council to find suitable accommodation for residents.
Discussions about the development between the council and QED have focused on an eight-storey development of 64 affordable flats and 386 square metres of commercial space on the ground floor.

All the businesses based on the site would be relocated before building work progresses.

When the committee discussed pursuing redeveloping the site in November 2020, Green council leader Phélim Mac Cafferty said that there was a political commitment to ensure that residents did not end up homeless.

The report going before the committee on Thursday 6 October says the lease would be structured to make sure it is “highly likely” QED will develop the site.

It said: “The proposal is that satisfactory planning permission would consist of 100 per cent affordable housing.

“The council could either purchase the freehold of the housing element of the scheme or lease the properties for a minimum of 35 years with an option to purchase for £1 at the end of that period with QED retaining the commercial space to let on a full repairing and insuring lease, retaining any rental income arising.”

These terms will be subject to a further report to the Housing Committee.

The report says there are currently 5,200 households on the housing register and 1,850 homeless households in temporary accommodation in Brighton and Hove.

There is a shortage of affordable homes.

The report said: “This is an opportunity to develop the last remaining site in the New England Quarter as affordable housing and commercial accommodation.

“Following expiry of the temporary planning consents, should the land not be developed the site will remain in split ownership and unsightly.

“The temporary units will be removed as a condition of the planning consent and the site cleared.

“To maximise their ownership and investment in the site, QED would be left with no option than to pursue their own development on the green land.

“The council will retain Richardson’s scrap metal merchants and associated car parking on the remainder of the site and a vacant corner on New England Road being the site of the old Cobblers Thumb public house.

“Any future development would have to be on a piecemeal basis and would not see the benefits of a comprehensive collaborative approach that maximises the development potential of the site.”

The Policy and Resources Committee meets at Hove Town Hall from 4pm on Thursday 6 October.

Its meeting is scheduled for webcast on the council website.