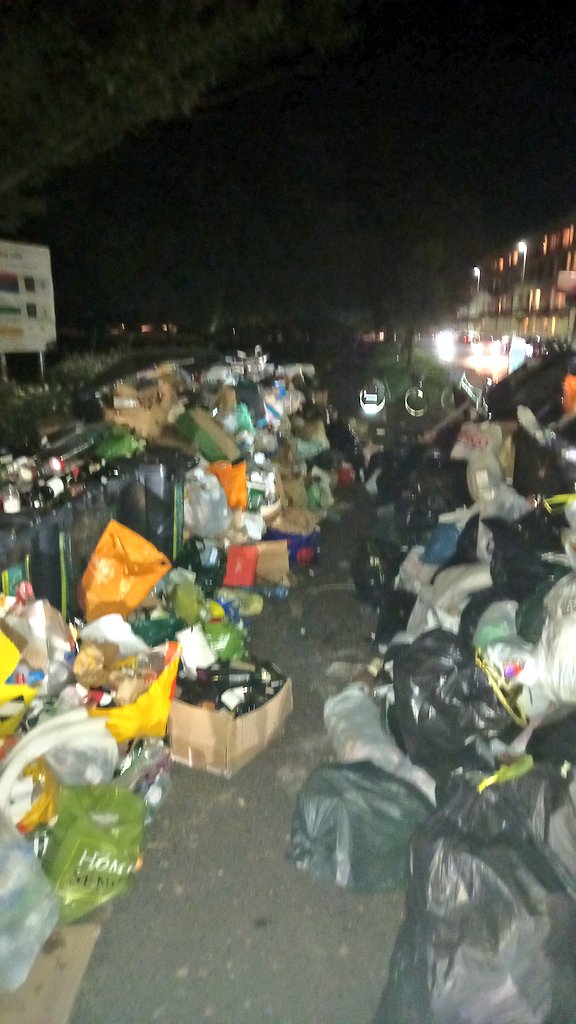 Rubbish piling up in Seven Dials last night. Picture by @consulthismusic on Twitter

UPDATE: The bin strike has been extended until mid-November after union reps walked out of a meeting where the council set out its latest pay offer.

The council said the GMB union, which represents the striking drivers, left before officers had finished setting out the pay offer.

The union told Brighton and Hove News it waited until the presentation was over, but then walked out because the offer had “gone backwards” on previous ones.

It later said it was now balloting refuse collectors and street cleaners – and that the drivers’ walkout was being extended by 15 days to mid-November.

Drivers had been due to strike for another week, then return to work before striking again from 21 October until 3 November.

Cityclean refuse truck drivers voted to strike last month over changes to bins rounds and other variations to duties, and the knock on effect on their health.

However, Brighton and Hove City Council today said the GMB union, which represents the drivers, raised pay as an issue during talks on the first day of the strike on 5 October.

A pay offer was put to them on the second day – and rejected on the third.

Today, council officers and union reps met again and a second “significant” pay offer which would benefit all council staff was being put forward – but the council says union reps walked out before the full details had been set out.

Councillor Hannah Clare, deputy leader of the council said: “Today we once again met with the GMB, to put a further, additional formal offer to them to resolve the dispute, this time involving increased pay.

“It’s our view that while pay was not on the original ballot, this increased pay offer is a positive attempt to recognise the hard work of not just city clean staff – but all staff working across the council.

“We’re disappointed that the GMB walked out of the room before discussing this offer with us.

“There are long term issues with the City Clean service that we’re keen to resolve, and we believe that discussion is crucial. Only by staying around the table can a good outcome can be reached, both for staff and for residents of our city.

“We are really keen to keep discussing this latest offer with the GMB and hope they will reconsider their walk-out today and resume talks. Our door remains open to talk any of this through with GMB reps.”

A spokesman said: “It’s disappointing that this offer has been turned down today. It was a significant and generous offer which would benefit not just staff in the Cityclean service, but also staff across the whole council.

“We urge the GMB to review the offer formally submitted to them in writing and come back to the table to discuss with us.”

Mark Turner, general secretary of GMB Sussex branch, said the latest offer had “gone backwards” from the previous one and accused the council of issuing “propaganda”.

He said: “They presented their offer which we left on the basis it’s gone backwards. It’s worse than the situation we started.

“They offered pay increases to the drivers on the basis they believed they’re having trouble recruiting.

“If they put a proposal that benefits the rest of the workforce, then that’s great, but we are dealing with an issue with a workforce that has raised issues with them.

“They need to improve the offer. They’re not even meeting us halfway.”

If agreement cannot be reached, all resolution options including the resolution proposal from the GMB will now be tabled in a report to go to a P&R Urgency Sub-Committee meeting to be decided on by councillors.

This is meeting is expected to take place this week.