The number of new coronavirus cases in Brighton and Hove has risen again, prompting health chiefs to urge people to have their jabs.

The weekly rate is above the England national average but lower than the average rate for the south east, Brighton and Hove City Council said.

The highest rate of new cases continued to be among children up to 14 years old although this may be the age group taking the most regular tests.

The next highest rate affected 40 to 59-year-olds, with the lowest rate among those over 60.

The director of public health for Brighton and Hove, Alistair Hill, said: “With high numbers of positive cases in every age group, it’s important we all boost our protection against covid.

“First and second doses of the vaccine remain available and many people are now eligible for a booster too.

“From this week, 16 and 17-year-olds can now get their second vaccination and anyone who’s 40 or over is now eligible for a booster 182 days after their second dose.

“It’s also now easier to get your vaccine. The NHS has added thousands of new appointments to the National Booking System.

“This now includes sessions at Brighton Racecourse and 800 appointments a day at Churchill Square.

“This is great news as it means thousands more people in the city will be better protected this winter. If you are due a vaccine, please book an appointment as soon as you can.

“I also want to say a big thank you to everyone who has been involved in running the NHS vaccination programme.

“It’s been a year of constantly changing demands but more than three million vaccines have been delivered across Sussex. This is a huge achievement.” 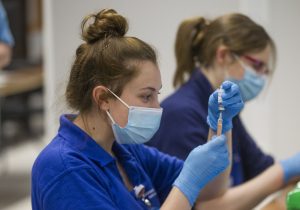 The number of patients with the virus in Brighton hospitals remains low, with 13 in the Royal Sussex County Hospital yesterday (Thursday 25 November). Five or fewer of those covid patients were in intensive care or high dependency beds.

And five or fewer children in the Royal Alexandra Children’s Hospital had covid as of yesterday, with none of them in intensive care or high dependency beds.

In the past two months, six people had covid-19 mentioned on their death certificate in Brighton and Hove, according to council figures up to Friday 12 November.

The total number of covid-related deaths of people from Brighton and Hove totalled 509 since the start of the pandemic.

The vaccination take up rate locally remains below the national average, with about 75 people a day currently having a jab at local vaccination centres.

The take up rate varies considerably within Brighton and Hove, with higher rates in places such as Mile Oak, Hangleton and Patcham.