Regency Brighton matters and we must recognise its value

The Conservatives and local residents want to see Regency Brighton restored to its former glory as a stunning and well-kept place at the heart of our city that serves our residents, heritage groups and tourism industry and also fosters civic pride.

Brighton’s Regency heritage is central to the city’s identity, with great meaning to many.

Many different groups and organisations have an interest in Regency Brighton, given it includes our city’s important historic monuments, gardens, war memorials, fountains and listed buildings, along with the Royal Pavilion.

As a council, we don’t just own these historic monuments we have a duty to look after them as custodians not just for now but for future generations to ensure they are preserved for posterity.

The residents who live in the Regency parts of Brighton, many in listed buildings, rely on the council to maintain the public domain including the communal facilities they rely on such as communal services such as bin collections and the public parks.

And the city’s economy as a whole relies on the Regency area being kept in pristine condition, as it is also the central tourist zone of the city and the gateway to the Palace Pier and surrounding hotels.

It was a window to our city and key part of the city’s presentation for tourists who visited. Tourism accounts for £886 million of the city’s economy, with many jobs and businesses reliant on a good impression being provided.

Flowers were planted for City in Bloom events, the fountain was switched on and maintained and the gardens and monuments were kept pristine. They provided the postcard pictures for Brighton.

However, in recent years residents, community associations and many heritage groups interested in the area have despaired as the state of Brighton’s Regency heritage has visibly declined and been allowed to deteriorate, with many groups are now speaking out, feeling that the council and councillors have not been listening to them and simply do not care about the part of Brighton in which they live.

The Conservatives have been listening and giving a voice to these residents and their issues. The list of problems that we have raised in just the past 18 months tells the story of a council that has stopped caring about what was its beating heart.

During the past two years, under this council, we have seen the city’s historic lanterns put up for sale on Facebook marketplace during a council cleaning exercise gone wrong.

Other basic public infrastructure has sat broken including the nine out of ten street lamps in Old Steine Gardens, leaving women feeling unsafe in some parts of the city at night.

Brighton’s prized Victoria Fountain has been switched off and veterans groups were offended when the council left the city’s main war memorial in a filthy condition for important ceremonies. 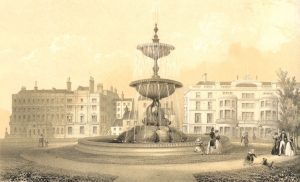 The residents of Regency Brighton have had to deal with the consequences of the council’s new homeless bill of rights policy that now allow tents and begging in the city’s public spaces.

And the Pavilion Gardens and surrounds were recently ranked the eighth worst of 33,000 statistical areas in the country for crime and anti-social behaviour following the council’s soft approach towards crime.

The area’s transport system has been meddled with, without local residents’ consent, through road layout changes in the Valley Gardens area. These changes have caused congestion and confusing new bus gates – or bus lanes – have snared 9,600 drivers and issued them with fines in one month alone.

And to top it off, the public gardens, once planted with colourful flowers, are currently a muddy quagmire. A sinkhole has now appeared near the Victoria Fountain after heavy machinery was allowed on the gardens for a Christmas festival.

The way this council has treated Brighton’s Regency heritage has become a rolling shambles and the residents have felt completely ignored.

What’s clear is that the council really does need to listen to the groups within the city with an interest and expertise in the past, particularly our heritage groups.

It needs to get to grips with turning around the problems facing Regency Brighton – from parking to cycle lanes to historic buildings. These groups are the eyes and ears for the city and they know what’s going on.

The Conservatives have been listening and will continue to listen to ensure that we work with residents to achieve the very best for Regency Brighton.

We would like to see Brighton’s famous Regency heritage and its historic public gardens restored to their former glory and once again become a centre piece for the city of which all of Brighton and Hove’s residents can be proud.