A woman from Brighton is missing in Tonga after the island was hit by a tsunami following the eruption of an undersea volcano in the Pacific Ocean. 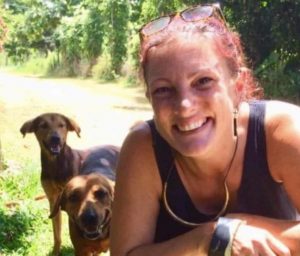 Angela Glover, 50, ran a dog rescue centre in Nuku’alofa, the capital of Tonga, and helped run a tattoo parlour with her husband James.

Mr Glover was reported to have called her family using a satellite phone supplied by the British embassy to tell them what had happened.

And Mrs Glover’s brother Nick Eleini, who lives in Sydney, spoke to a journalist from the Guardian as he returned to Britain to be with his mother, Jennifer, who lives in Hove.

The Guardian quoted Mr Eleini saying: “What are we? Forty-eight hours later? I don’t think this is going to have a happy ending.

“The tsunami hit around 5.30pm local time, I believe.

“Angela and her husband, James, got washed away.

“James was able to cling on to a tree for quite a long time but Angela was unable to do so and was washed away with the dogs – I think four or five dogs.

“They were housesitting a house on the west coast of the island (of Tongatapu, Tonga’s main island).

“James went back to their proper house on the south coast of the island but Angela didn’t turn up.

“James contacted the police and the British embassy there, where he was able to notify us of what happened.

“One of the dogs has been found but Angela hasn’t been found.”

And he cried as he spoke about his sister, the Guardian said, and added that the search was continuing.

The newspaper’s website said: “Glover, who was born in Brighton and has a background in marketing and advertising, has been living in Tonga since about 2015.

“She set up an animal shelter called Tonga Animal Welfare Society to care for and rehouse stray dogs.”

The report quoted her brother saying: “She always wanted to travel the south Pacific and she’s always been drawn to swimming with whales – and Tonga’s one of the places that you can do that.

“She married James in about 2014 and talked him into following her around the Pacific and they settled in Tonga.”

The Guardian said: “James Glover had a tattoo parlour in London before moving to Tonga. He set up the Happy Sailor Tattoo Parlour in Nuku’alofa, the country’s capital.

“Eleini believes his sister could have been at Ahau, a village on the eastern side of a small spit of land on the west of Tongatapu, when the tsunami hit.”

Mr Eleini was quoted as saying: “I kind of thought if they were at home, they would’ve been alright, but that’s a very small spit of land, only a few metres above sea level.

“All I can speculate is that the waves came and washed them away.”