The Kemp Town Society (KTS), while welcoming development of the gasworks site and noting it has remained undeveloped for many decades, strongly objects to the proposed mixed-use redevelopment.

No learnings appear to have been incorporated from the overturning of the Brighton Marina development and the planning inspector’s ruling.

This status demands it is given exceptional protection against harm from developments which could be detrimental to the quality of its character.

The proposed gasworks development, an urban conglomeration including 11 densely packed tall buildings (over seven stories), neighbours the grade I listed buildings of the Kemp Town Estate.

The density of the proposed development – comprising 553 residential units and 2,697sqm of commercial space – is significantly out of proportion with all surrounding architecture.

This will have a serious and detrimental impact on current infrastructure, quality of life for residents and visitors, and public health and safety.

From the Brighton Palace Pier to Roedean School, Marine Parade and Marine Drive together form one of the longest, continuous stretches of seafront in the country, of unparalleled high architectural quality.

There are over 200 listed buildings and structures along its length of two miles, making it the country’s most impressive marine façade to the sea.

To the east are the locally listed Marine Gate and the grade II listed Roedean School.

It is imperative that any development on the gasworks site is of first-class architectural quality and respects the scale, height and character of the consistent architectural excellence of the neighbouring buildings.

The proposed development conspicuously fails to respect the architectural distinction of the surrounding buildings.

KTS is supportive of this redundant site being redeveloped for housing, which will make a valuable contribution to meeting Brighton and Hove City Council’s housing targets.

The current proposal does not include details of affordable housing, important to create a sustainable local community.

The current proposal for a densely packed conglomeration of tall blocks will dominate its surrounding neighbours by sheer size, height, scale, density and massing, with impact well beyond the curtilage of the development. 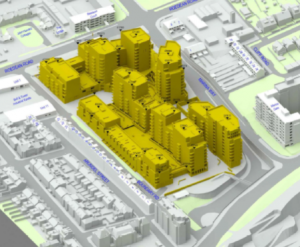 With the Brighton Marina development now turned down, any proposal that tall buildings are acceptable on the gasworks site is no longer relevant.

The planning inspector for the Marina appeal was critical of the jarring relationship of the Marina proposals to the heritage assets in the immediate vicinity.

Endorsed by the planning inspector and the Secretary of State, these are more relevant when applied to the relationship of the tall, densely packed buildings of the gasworks development to those of the same heritage assets as described.

It is the opinion of KTS that these grounds alone are sufficiently strong to justify refusal of this planning application.

It asks the council take note of the precedent set by the Brighton Marina appeal decision, and reject the gasworks planning application outright. 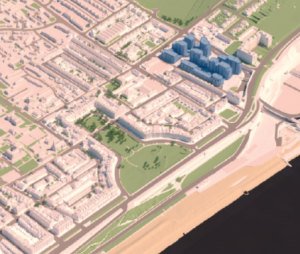 KTS notes the gasworks site is not identified as a “special site” under the Contaminated Land Regulations 2006. Decontamination procedures are effectively excluded from this planning application.

Due to the significant risk of developing the site, KTS is not able to support an application without a detailed contamination survey, to establish there are no health and safety risks to Kemp Town Estate residents, visitors and neighbouring areas.

The height and bulk of the proposed buildings will maximise the risks of deep excavations into contaminated ground. 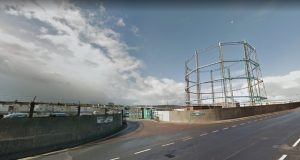 A development of the proposed scale will also inevitably stretch demands on current infrastructure.

The planning application does not address the issues resulting from 553 additional residential units – or about 1,000 new residents – and 2,697sqm of commercial space. These include

It is on these grounds that the Kemp Town Society registers on behalf of its members its strong objection to planning application BH2021/04167 for the Brighton gasworks land bounded by Roedean Road (B2066), Marina Way and Boundary Road, Brighton, BN2 5TJ.

Michael Bedingfield is a member of the Kemp Town Society committee and the society’s representative on the Brighton and Hove Conservation Advisory Group.

This is an edited version of the Kemp Town Society’s submission to Brighton and Hove City Council.