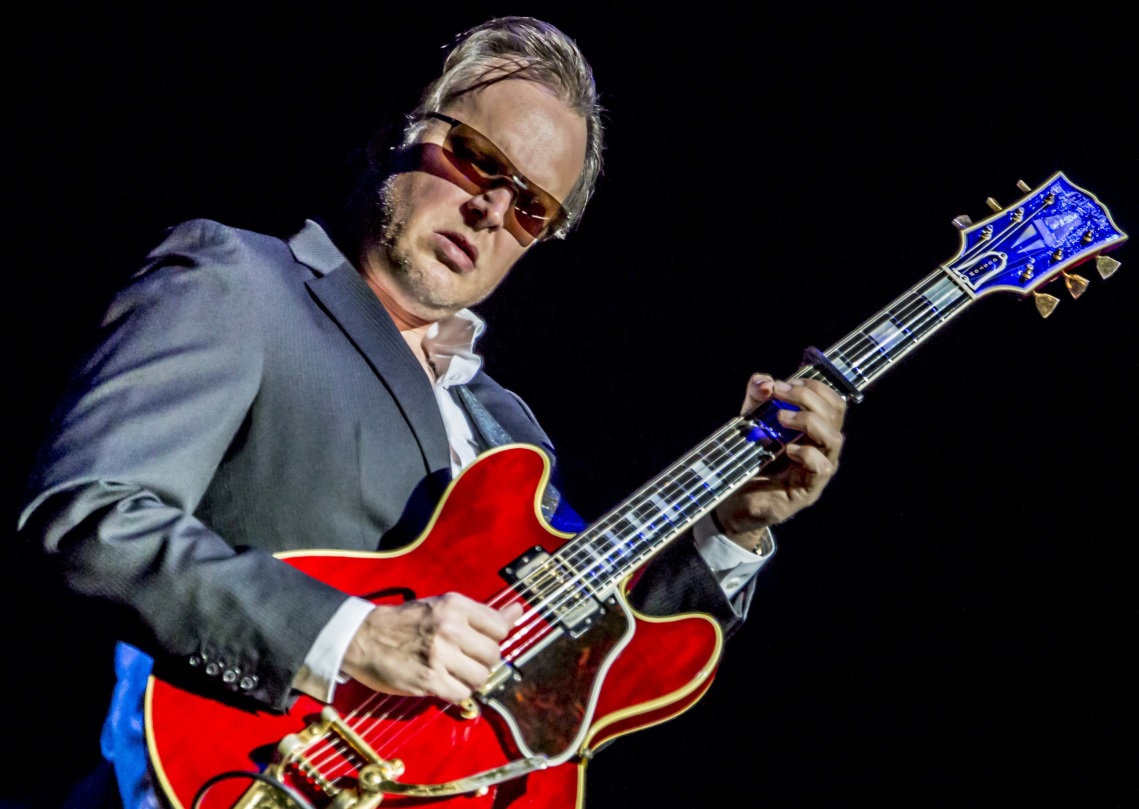 Joe Bonamassa has been featured on the cover of virtually every guitar magazine multiple times. His name is notorious among guitarists not only for being a virtuoso, but also for his incredible collection of vintage guitars, gear and memorabilia (which he now calls the Bona-seum). 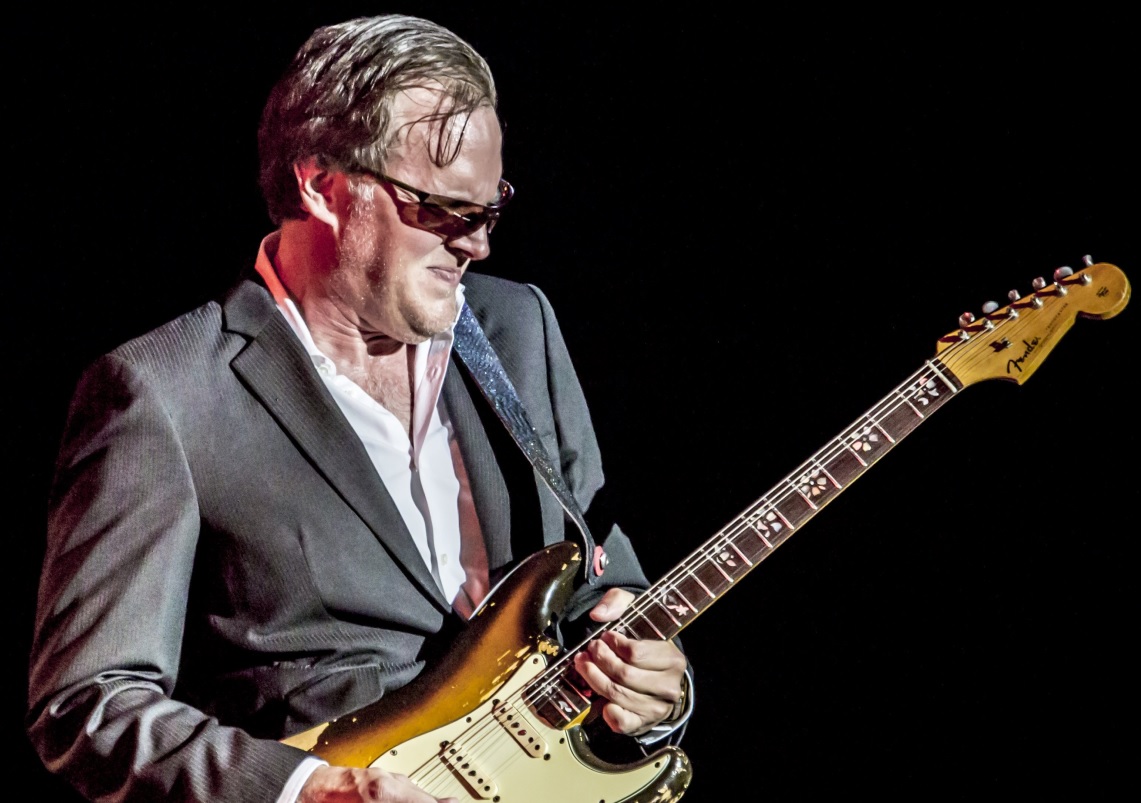 His love of blues music goes back to his childhood and to encourage him his father arranged for him to be mentored and trained by American guitar legend Danny Gatton. At the age of 12 he opened for more than 20 shows for B.B. King and with his own band called ‘Smokin’ Joe Bonamassa’ he played around New York & Pennsylvania.

As an individual solo artist he has recorded 16 studio and 16 live albums and with the ‘Black Country Communion’ he has released five albums, with ‘Candy Funk Party’ released four, and with Beth Hart another four albums. Almost every album Joe has produced instantly rockets to the number one spot on the US Billboard’s Blues Top 10 album chart. 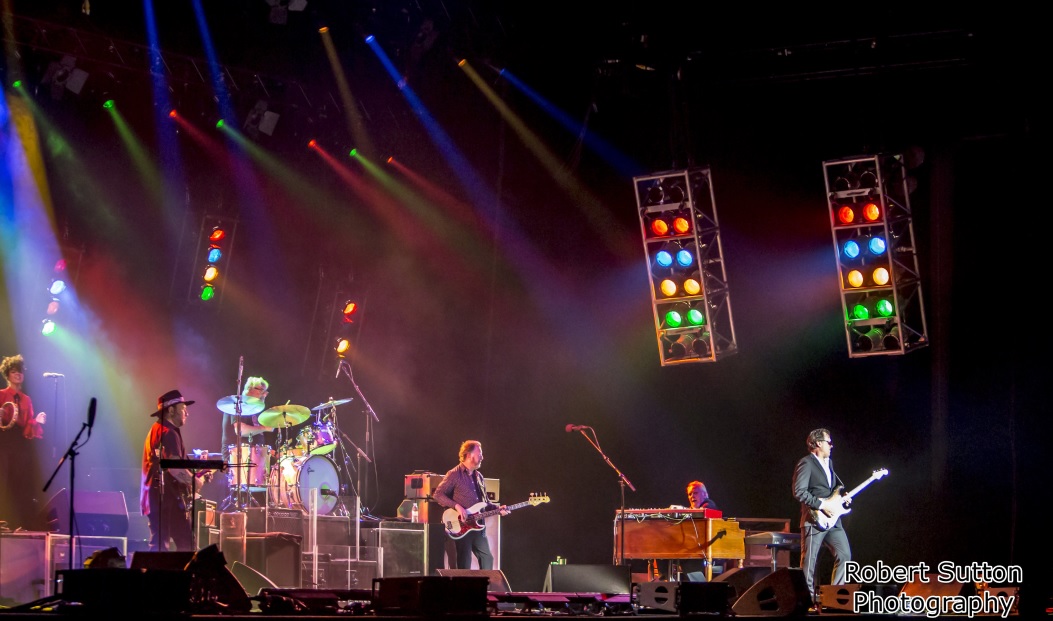 He was brought to the attention of the UK audience by Paul Jones on his Blues show on Radio 2. He has become a titan of modern blues music and featured in blues music charts since 2000. This is the first time in three years that Joe has returned to the UK stage.

The stage was in darkness then they played ‘Welcome Back’ by John Sebastian. The lights came on and Joe Bonamassa was standing centre stage wearing a black suit and sunglasses with a Red Gibson SG slung around his neck. Behind him were his band, an amazing group of musicians with an incredible rock pedigree. 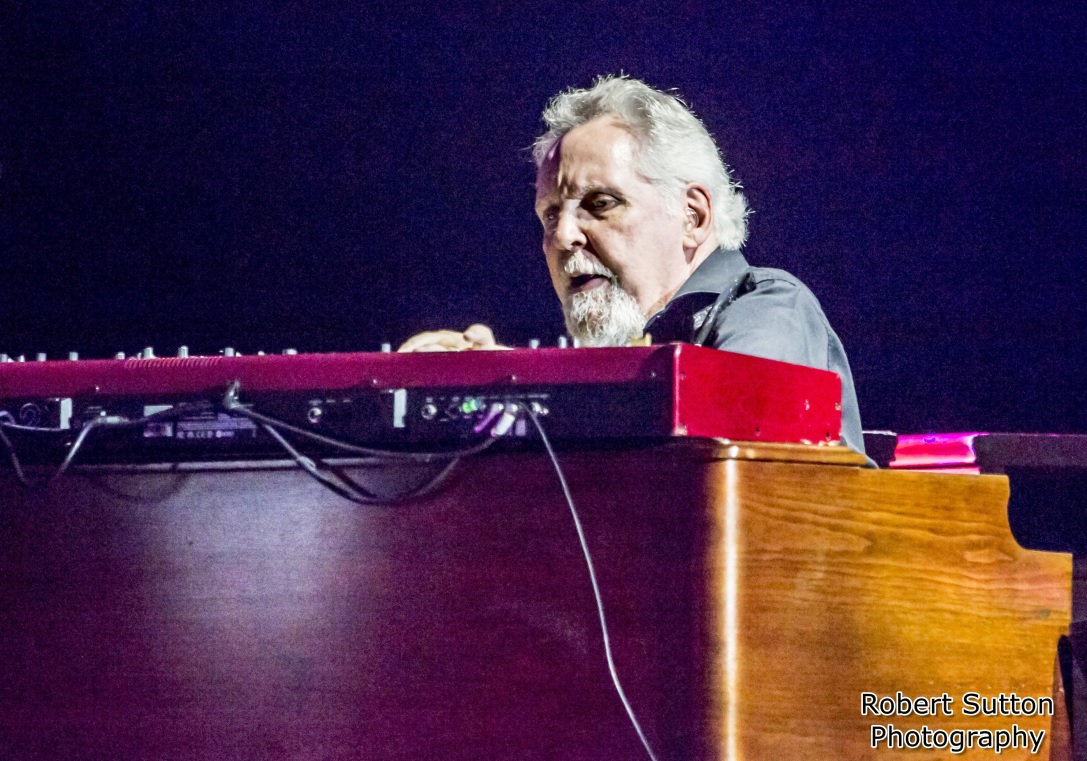 On keyboards was Reese Wynans, who was a member of Double Trouble and progressive rock band Captain Beyond. In 2015, he was inducted into the Rock and Roll Hall of Fame as a member of Double Trouble. On bass guitar was Stephen Mackey best known as the bass guitarist for the alternative rock band Pulp. On rhythm guitar was Josh Smith who’s latest and 11th album, ‘Live At The Spud’, was released in 2020. On drums was Greg Morrow who’s career includes performing and recording with Blake Shelton, Don Henley, Billy Gibbons, Bob Seger, Luke Bryan, The Dixie Chicks plus many more. That leaves two amazing female backing singers Jade MacRae and Dani De Andrea both have been singers behind many great artists. 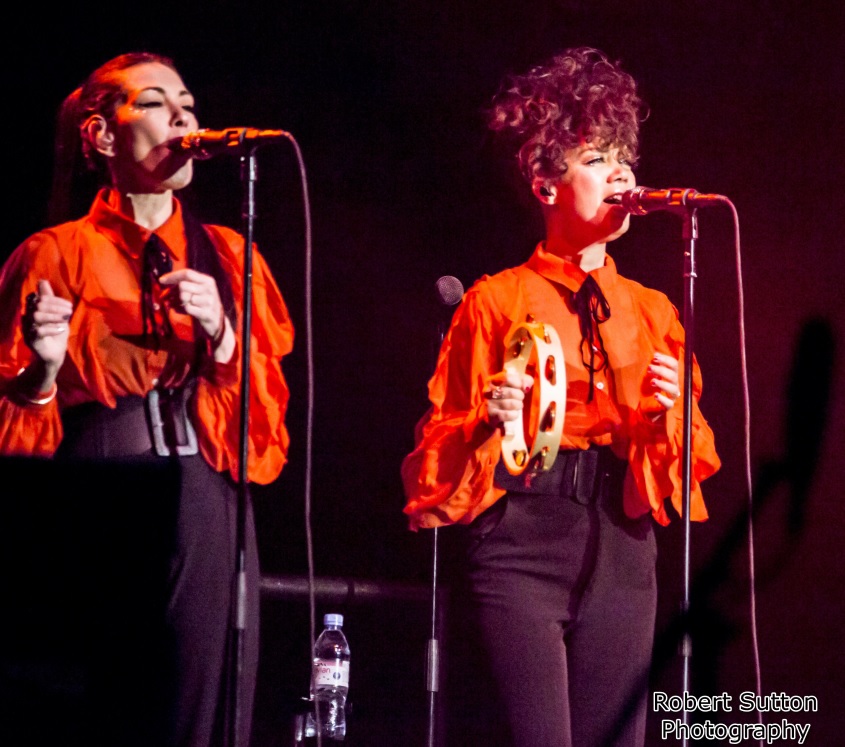 They launched into ‘Evil Mama’ (Album: ‘Redemption’ released in 2018), which set the tone for an entertaining night of blistering music. This really focused on all musicians taking their part, as you would expect Joe undertaking a blistering solo. Next up was ‘Dust Bowl’ (from the album of the same name released in 2011). For every song, a change of guitar, this time a cherry red Gibson 335. The melancholy tones and rift seemed to draw you into the emotion of the lyrics. This was followed by ‘Love Ain’t A Love Song’ (Album: ‘Different Shades Of Blue’ released in 2014). 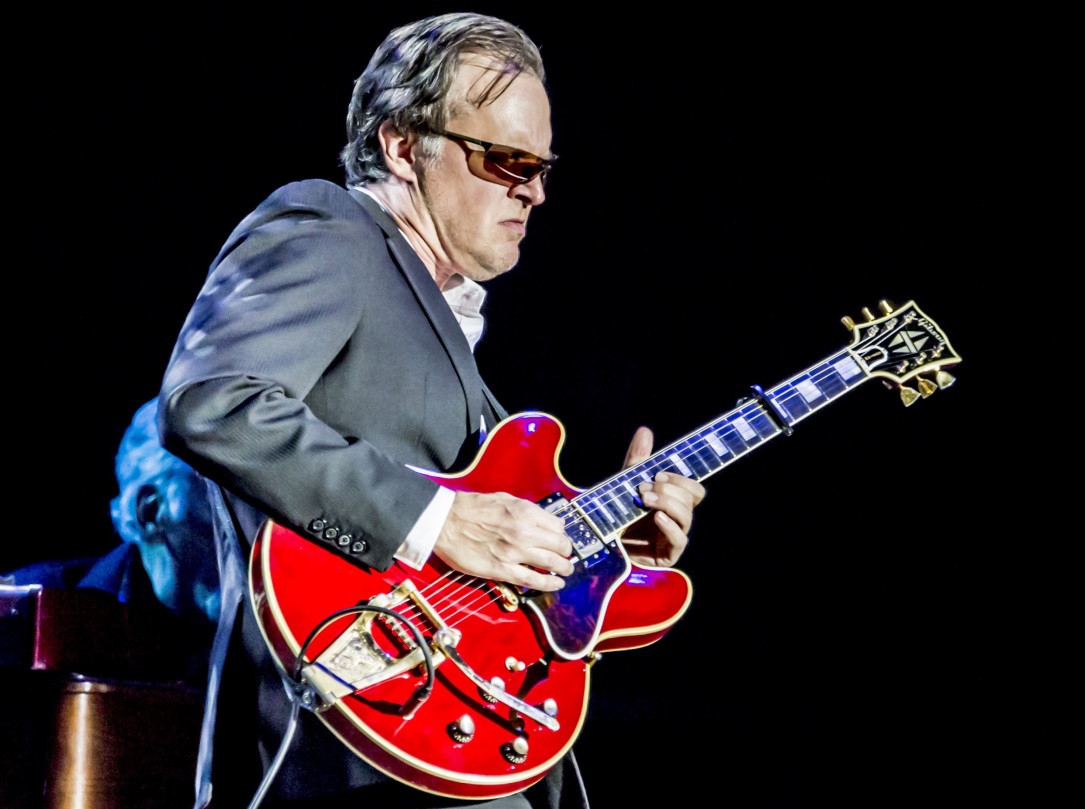 Next served up was ‘Midnight Blues’ (Gary Moore cover), a soulful blues and again an amazing solo for Joe, this time on a Gibson Les Paul. Joe paid homage to Gary, full of emotion, he can really work an audience and make his guitar sing, anyone who says Joe does not have a feel for the blues doesn’t get it, and this was as raw as it gets.

The next couple of pieces were from his last two albums, ‘The Heart That Never Waits’ from ‘Time Clocks’ (2021) and ‘I Didn’t Think She Would Do It’ from ‘Royal Tea’ (2020). Both these tracks showed a band in full focus, especially the interplay between Joe and Josh’s guitar work and Reece’s keyboard, both stunning. 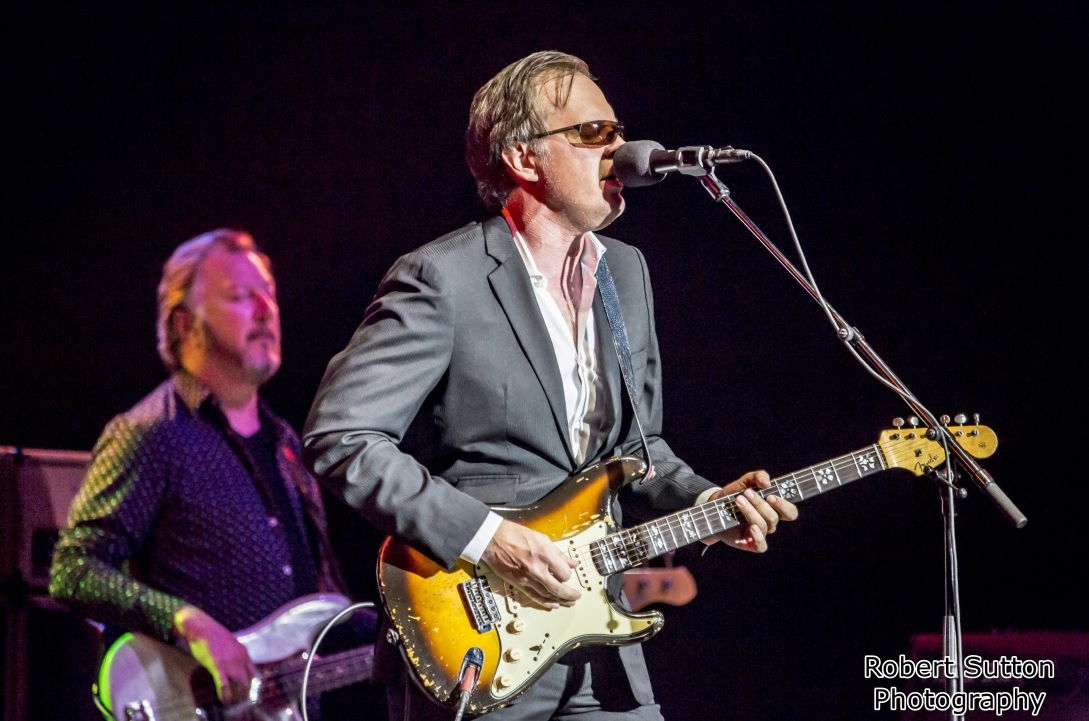 Time to slow things down with ‘Django’, first appeared on the live album ‘You & Me’ (2006) however Joe plays it at nearly every performance. The rendition of it at the start of his Royal Albert Hall concert in 2013 was phenomenal. ‘Pain And Sorrow’ was up next from the same album, its thumping bass line giving a really powerful interpretation, at one point Joe was attacking his guitar in a frenzy of notes, truly mesmerising the audience. 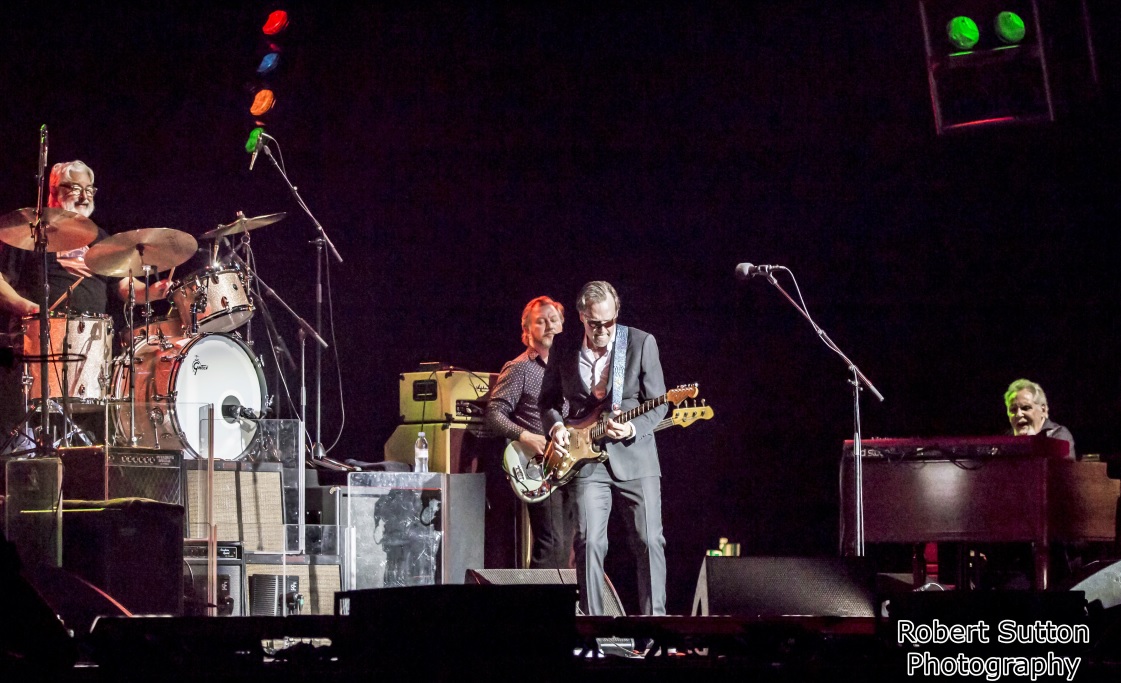 Time for a chat, Joe spoke to the Brighton audience joking about possible jobs he could have done during lockdown, maybe an Amazon driver! He then welcomed Bernie Marsden on stage, a rock legend and an original member of Whitesnake. Joe and Bernie wrote the next number together, ‘A Conversation With Alice’ (Album: ‘Royal Tea’, 2020)

It was then time for the title track from his UK breakthrough album ‘The Ballad Of John Henry’. The last song before the encore, and wow did he go for it, an incredible performance with at one point Jade MacRae raising the roof with an amazing vocal. 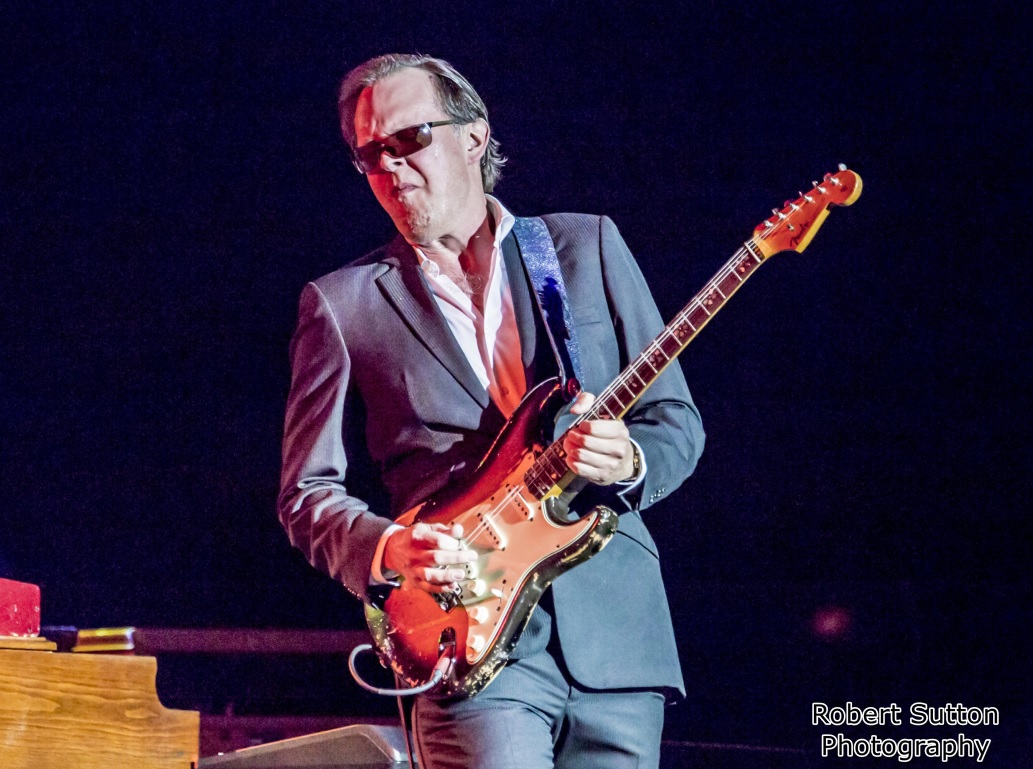 The encore started with Joe coming on stage with an acoustic, giving a virtuoso performance of ‘Woke Up Dreaming’ (Album: ‘Blues Deluxe’, 2003), followed by the full band on the final number, ‘Mountain Time’ (Album: ‘So It’s Like That’, 2002) .

The whole show was simply a jaw droppingly slick performance by one of the world’s best guitarists and backed by an astoundingly talented band. 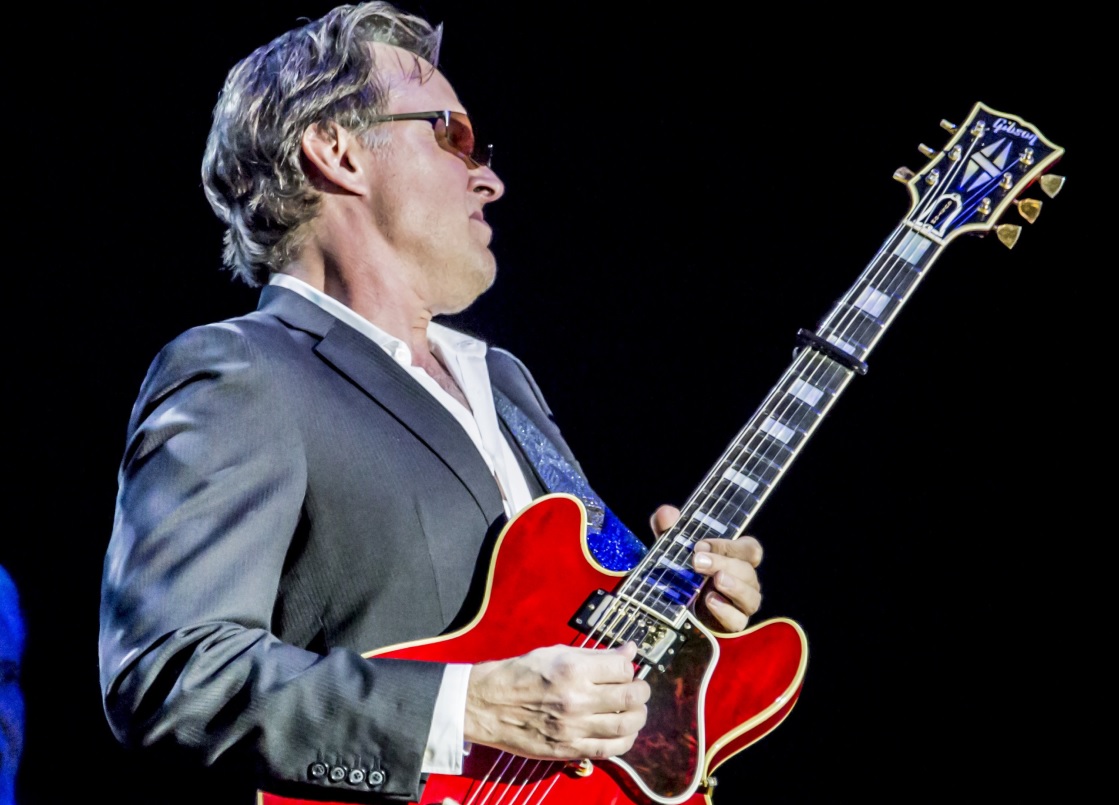 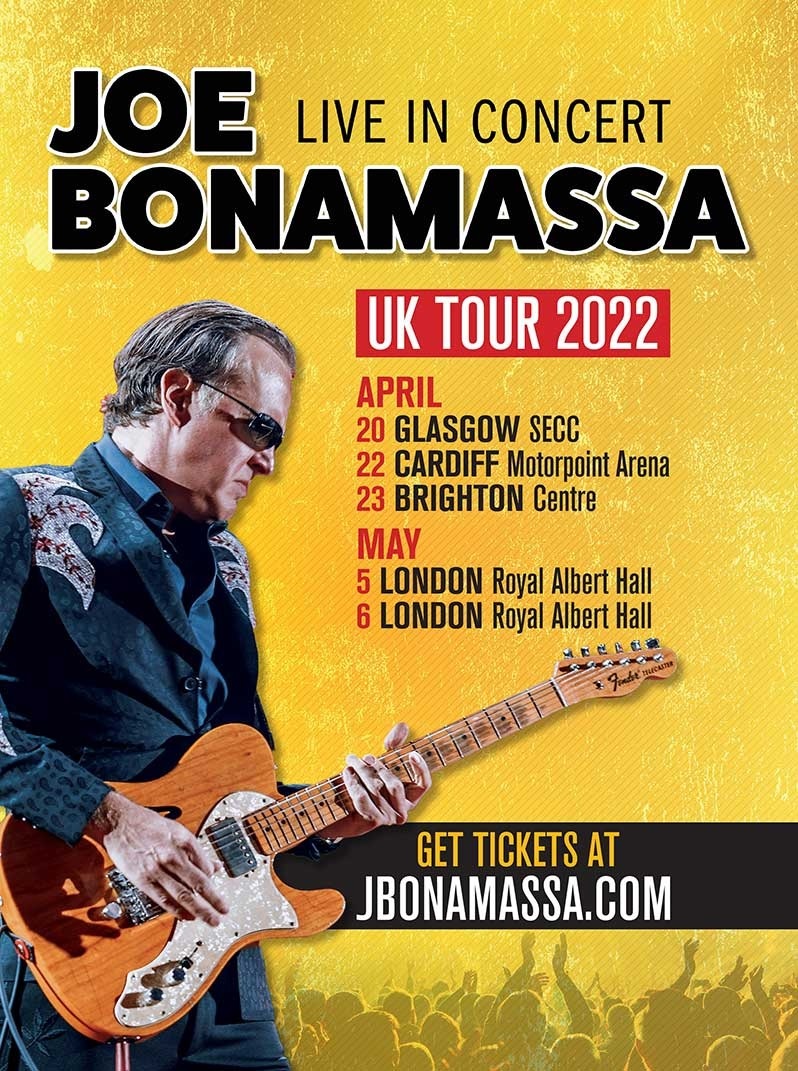