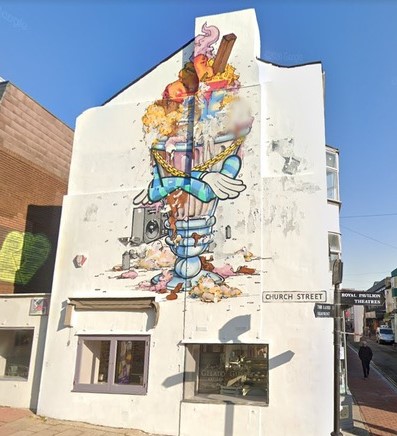 Colourful murals look unlikely to return to the wall of an ice cream parlour in Brighton after the council turned down planning permission.

Global Street Art wanted to paint the mural on the side of the Gelato Gusto ice cream shop on the corner of Gardner Street and Church Street, in the North Laine.

Previous artwork there attracted criticism, with the Brighton Society complaining about one which promoted Oatly vegan ice cream in 2019.

Global submitted a planning application for a new mural in June last year although it said that artworks did not require planning permission from the council.

The council rejected the plans. The council’s head of planning Liz Hobden said that the scale of the display, with advertising unrelated to the business in the building, would harm the street scene in the North Laine conservation area.

Global appealed against the decision in February but this month it withdrew the appeal.

When it submitted appealed, the company said: “The proposal would cause no detriment to the host property’s architectural and historic character and would respect its setting within the conservation area.

“It is submitted that the proposed use of hand-painted material would be appropriate and it is also important to note that the murals would not be illuminated.”