It asked for an end to fossil fuel investments and for the county council’s Pension Committee to include a city council representative.

Pension fund member Sarah Hazlehurst, who is based in Brighton, had support from Green county councillor Wendy Maples, who represents Lewes, when she presented the petition yesterday.

It was received by Conservative councillor Peter Pragnell, who chairs the county council, at the full council meeting yesterday.

Ms Hazlehurst said: “As a climate activist, I do not want any of it (the East Sussex Pension Fund) to be invested in fossil fuels which is both morally and financially imprudent.

“All my working life has been for and with children and young people – and I don’t want my pension to contribute to jeopardising their futures or that of my children and four grandchildren or indeed anyone else around the world.”

In addition to the petition, Ms Hazlehurst was one of 52 people who submitted the same question to the county council.

They asked if the council accepted the International Energy Agency’s conclusion that to limit global warming to 1.5C, all investments in new oil, coal and gas should stop at once.

Brighton resident Hugh Dunkerley said that the Pension Committee had refused to stop investing in the big oil and gas companies.

Professor Dunkerley said that the sector planned to spend £930 billion on new oil and gas supplies over the next nine years – “investments which, if they’re successful, make limiting global warming to 1.5C impossible”.

He said: “East Sussex County Council has declared a climate emergency. It is hard to see the point of this considering the council’s continuous support for the fossil fuels industry.

“When will the Pension Committee and the council more widely finally stop providing a fig leaf for these companies and their, frankly, sociopathic policies – and divest in fossil fuels?”

“It is not for the Pension Committee to debate and agree or disagree with the views expressed by the IEA in its first piece of 1.5C modelling.”

Councillor Fox also said that Professor Dunkley’s question was not a supplementary question and that he could not provide any more information because the committee made decisions. 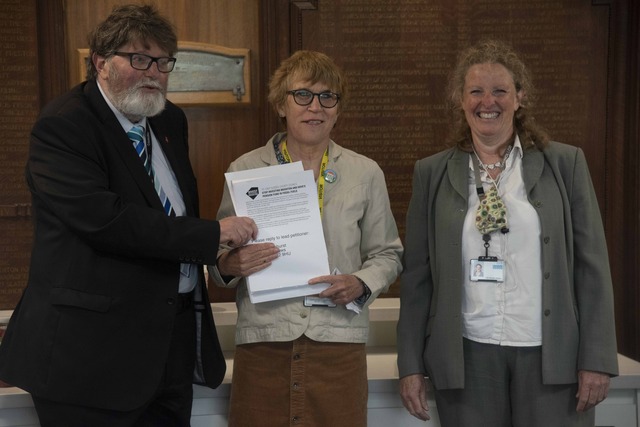 Councillor Fox added that the policy for responsible investment was on the Pension Committee page on the county council’s website.

In February, Brighton and Hove City Council voted to ask the pension fund for a two-year timetable to end investment in fossil fuels.

The East Sussex Pension Fund is operated by the county council on behalf of local authorities and other public bodies across the county.

City council employees make up more than a quarter of the members of the East Sussex Pension Fund members and account for a third of the contributions.

But all of the five members of the Pension Committee are from East Sussex County Council – while the county council’s Pension Board has seven members including two councillors representing Brighton and Hove.

Green councillor Tom Druitt, who represents Regency ward on the city council, is preparing to ask the Pension Board for two seats on the Pension Committee for Brighton and Hove representatives. The board is due to meet on Friday 27 May.

In March, Councillor Fox replied to a question from Green councillor Elaine Hills, who represents Hanover and Elm Grove ward on Brighton and Hove City Council.

He said that he did not see why Brighton and Hove should have a seat on the committee when 130 other employers in the fund did not.