Hundreds of council homes left empty for months at a time

More than 250 council homes have been empty for an average of almost six months each, tenant representatives were told this week.

The revelation prompted criticism from councillors who asked why homes were sitting empty for so long when people were homeless and thousands were on the waiting list.

A senior Brighton and Hove City Council housing official said that staff had been trying to catch up since the coronavirus pandemic.

Some of the delays were blamed on a lack of specialist contractors to refurbish empty properties in need of extensive repairs.

And the council has been trying to fill dozens of vacancies after bringing maintenance and repair work back in-house from the contractor Mears because too few staff chose to transfer to the council.

They spoke out at a meeting of the council’s West Hove and Portslade Area Housing Management Panel yesterday (Wednesday 18 May).

Before the meeting, a man living in a caravan behind shops in Hangleton and Knoll asked Councillor Barnett, who represents his ward, for more help with the council’s housing department.

She said: “I’m quite concerned about the fact this man was born and bred in Brighton and he’s living in a caravan yet homeless people from Manchester and Timbuktu are getting housed before the likes of this gentleman. He’s not a young man. He’s older.”

She criticised the council for leaving a house sitting empty after the tenant was jailed for six years and saying that it would remain vacant until she comes out.

Councillor Barnett said that other older residents had contacted her seeking help to downsize from family homes to one-bedroom flats after being told that smaller flats were only for formerly homeless people.

She said: “These are people who want to downsize and free up family homes. A two-bedroom place is suitable for a woman with two kids or a couple with one child.

“I’ve got two people waiting to do that. I’m concerned about the length of time it’s taking. It’s crazy. I’ve never known housing to be so bad.

“There are more than 200 empty properties for social housing when there are all these people homeless.” 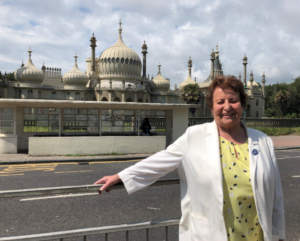 She said that tenants should be allowed to move in with repairs and refurbishment taking place around them to replace older kitchens and bathrooms.

Councillor Pissaridou asked why houses were sitting empty when people were homeless. She said: “I’ve got a man who works for the city council all his working life. He’s coming up to 57 and lives in very precarious accommodation like a student let.

“All he wants to do is get on the housing list. He realises, at 57, he’s not going to retire early, but he wants to be on a list. He wants security to know that in his retirement he will have a home.

“He’s been told there is no housing list. When he retires, he’ll have to be made homeless and be on the street.”

Residents’ rep Roy Crowhurst, from Woods House, in Sackville Road, Hove, said that, in his experience, the average let time was a year.

He said: “An empty property here has been empty since December – decorated, done up and still empty six months after completed.

The council’s assistant director for housing Martin Reid said that too many homes were waiting to be let during the pandemic.

He said: “What we’ve been trying to do is relet more homes. Yes, there are too many homes remaining empty, but we are seeing very high levels of relets.

“Last year, we relet 472 homes. That’s higher than we relet in 2019. There is an element of catching up but there is lots of activity.”

Mr Reid said that when homes were empty for longer because they needed extensive repairs, it did not help with the relet time.

Some homes required extensive work, such as new kitchens, bathrooms and rewiring, he said, which could cost up to £7,500.

Some of the delays were related to a lack of specialist contractors. Mr Reid said that not enough staff transferred when the council took back its repair work from Mears – but more than 70 vacancies were now mostly filled.