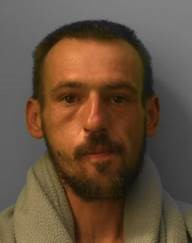 Police have asked for the public’s help as they try to trace a wanted Brighton man, Mark Turner.

Sussex Police said this afternoon (Monday 20 June): “Police are searching for Mark Turner, who is wanted on recall to prison.

“Turner, 36, had been serving a sentence for possession of an offensive weapon.

“He is believed to be in the Brighton area.

He was arrested last September and charged with having a masonry hammer in a public, namely the Robert Dyas shop, in Western Road, Brighton.