Tributes have been paid to a Brighton housing campaigner who has died at the age of 77.

Barry Hughes was a founding member of the Brighton and Hove Housing Coalition which supports tenants and leaseholders, campaigns for decent homes for all and an end to homelessness.

Mr Hughes also served as a trustee on the board of Brighton and Hove Seaside Community Homes which was set up to help bring empty council homes back into use.

He was a former advertising copywriter and newspaper columnist and gave his time to many community and voluntary groups. He died early yesterday (Friday 22 July).

“Barry volunteered tirelessly for the Coalition. He took over the reins after our former chair Steve Parry passed away a few years ago.

“Barry would often challenge the council and take part in campaigns that improved services to local residents and highlighted social injustices.

“Barry worked tirelessly in various roles over the years, closely associated with resident associations and even chairing area panels.

“He was also a trustee with Seaside Community Homes and was an excellent writer, publishing books and writing for others.

“We don’t know any more information at this stage. We send our love to his friends and family at this difficult time.

“We hope you and Steve are having a lovely drink up there! RIP Barry Hughes.”

Green councillor David Gibson, who co-chairs the Brighton and Hove City Council Housing Committee, said: “Barry was a truly genial man. He was tirelessly active in support of residents and involved in many groups.

“Not only was he an effective champion for residents on the Sylvan Hall estate, building a strong community, but he also played a key role in founding the Housing Coalition, going on to become its chair.

“He often had a twinkle in his eye and, despite a mild manner and good humour, he was a very effective advocate for the many causes he supported. A loss for us all.” 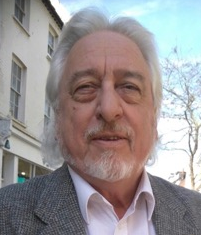 Tributes on the Housing Coalition’s Facebook page include one from homelessness campaigner Jim Deans said: “We are all in total shock. Barry was ‘the Gentleman’ – always a voice of reason and always there with support when you needed it.

“He often read between the lines and knew you needed help even before you asked. He constantly thought only of others and in the last few weeks I think that has become so obvious. Rest in Peace Barry you will be sorely missed.”

And Swale Borough Council chief executive Larissa Reed, the former executive director for neighbourhoods, communities and housing at Brighton and Hove City Council, said: “That’s very sad. We had some very lively chats but he was always kind to me and was a proper gentleman.”