Brighton should be a monkeypox vaccine priority area as health chiefs deal with a shortage of doses, according to a sexual health charity chief.

Terrence Higgins Trust chief executive Ian Green spoke out as it emerged that Britain is waiting to receive about 100,000 doses of smallpox vaccine amid reports that the country is running out.

The UK Health Security Agency (UKHSA) said that 150,000 doses had been procured but only 50,000 had been received so far because of supply issues.

Only about 5,000 doses of the jab are left, Sky News reported, with the remaining stock expected to arrive next month.

The NHS said late last month that it was stepping up its vaccination programme against monkeypox in London as more supplies of a jab became available.

Mary Ramsay, from the UKHSA, said: “UKHSA moved early to procure over 150,000 doses of the smallpox vaccine from the global manufacturer.

“Around 50,000 of these have been received to date and made available to the NHS for distribution across the country.”

Dr Ramsay added: “The rollout is continuing at pace, with the vaccine being offered to individuals at higher risk of coming into contact with monkeypox in order to offer them protection and to help contain the current outbreak.

“The remaining approximately 100,000 doses are expected to arrive in the UK in September.

“The thousands of vaccines administered by the NHS to date among those at highest risk of exposure should have a significant impact on the transmission of the virus.”

Thousands of cases of the illness have been recorded across Britain, with most transmitted between gay and bisexual men and men who have sex with other men.

Vaccination experts have recommended that gay and bisexual men be offered the smallpox jab Imvanex.

Mr Green said: “There needs to be urgent action to salvage this situation. We know many gay and bisexual men will be worried by news of vaccine supplies running low and our advice to them is please do not panic. 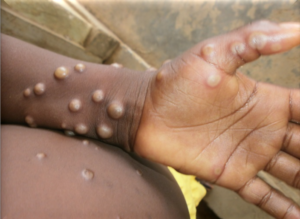 A patient with monkeypox – Picture courtesy of the World Health Organisation

“It’s crucial we have transparency from the UKHSA about what’s happened and when we can expect more doses to reach the country, as the vaccine programme is absolutely crucial to getting on top of the monekypox outbreak.

“The very limited doses of vaccine we have left in the country must now be prioritised for those most at risk in the places with the highest reported cases.

“That means ensuring sexual health services in places like Brighton, Manchester and Essex are given provision alongside London.

“It’s high time we got a proper grip on the monkeypox response and for that we need to see this taken seriously at the highest level of Government.”