A Brighton man has been jailed for more than three and a half years for domestic abuse, assault and harassment.

Jack Fitzpatrick, 26, of Stanmer Park Road, in Brighton, was jailed for a total of 44 months for a series of offences committed in January and February.

The court was told that Fitzpatrick was verbally abusive, controlling Miss Brown’s phone usage and behaving aggressively towards her.

In January, Fitzpatrick attacked Miss Brown, causing her actual bodily harm (ABH) and in January and February he repeatedly went to her home and phoned her in breach of a restraining order.

Fitzpatrick was given concurrent prison sentences of two years for the assault and 14 months for breaching a restraining order.

Detective Inspector Laura Hillier-Diamond, of Brighton and Hove’s Safeguarding Investigations Unit, said: “Fitzpatrick’s abusive and controlling behaviour had a huge impact on his victim’s life, both physically and psychologically.

“She has shown incredible bravery in supporting this investigation through to prosecution and I hope this custodial sentence brings her some measure of comfort.

“Domestic violence and coercive and controlling behaviour will absolutely not be tolerated and we are steadfast in our commitment to protecting victims and bringing perpetrators to justice.”

In February, after Fitzpatrick was charged, Sussex Police said: “Detectives in Brighton have charged a man with a number of offences linked to domestic abuse and coercive and controlling behaviour.

“Jack Fitzpatrick was reported to have emotionally and physically abused a woman several times in January and February.

“The victim also reported her phone being stolen and destroyed, a door and jewellery damaged and Fitzpatrick threatening to kill her.

“He was also in breach of an existing restraining order by contacting the victim.

“He has been remanded in custody pending a court date to be confirmed.” 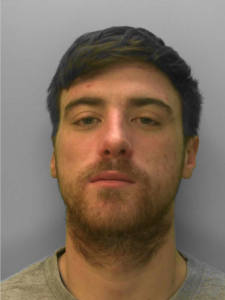 At that time Detective Inspector Hillier-Diamond said: “Abusive and controlling behaviour has a devastating impact on people’s lives and I would like to thank and commend the victim in this case for her incredible bravery in supporting the investigation.

“As a force we will continue to take all reports of domestic abuse extremely seriously and proactively take steps to safeguard victims and bring the perpetrators to justice.

“We have a dedicated team of domestic abuse investigators who can respond to victims via video calls quickly and discreetly, as well as specialist officers to offer ongoing support to victims.

“If you or anybody you know is a victim of domestic abuse, report it to us via the Sussex Police website, 101 or 999 in an emergency.

“You can also find support and information at Safe Space Sussex.”