A Conservative councillor has criticised the Greens for failing to protect greenfield sites in its 10-year blueprint for housing.

Councillor Samer Bagaeen, a professor of planning, cited the latest census, which suggested that the population of Brighton and Hove had barely changed since 2011.

But Brighton and Hove City Council’s housing blueprint – known as the City Plan – has been based on a higher population forecast and, as a result, the council has a bigger housebuilding target.

To meet the target, the council has identified a number of controversial sites around the edge of Brighton and Hove – known as urban fringe sites.

Several of them have spurred campaigners to protest outside council meetings as councillors and officials have shaped the City Plan Part Two which is due to be adopted next month.

Councillor Bagaeen said that the council did not listen to more than 6,000 residents who signed four petitions objecting to land at Whitehawk Hill nature reserve and in Coldean Lane being earmarked for housing.

It also ignored Patcham residents who managed to persuade a government planning inspector to safeguard land next to Horsdean Recreation Ground. The loss of habitat was deemed to outweigh the benefit of 10 potential homes there.

Councillor Bagaeen said: “There are 900 homes (earmarked) for the urban fringe. It is clear to me, as a councillor, as a planner and as someone who reads data, if these were taken out of City Plan Part Two, the plan would remain intact and above housing target.

“This council does not need to take the position that it is taking on allocating land for a small number of dwellings in the urban fringe. It is a conscious choice to do so.”

But Green councillor Leo Littman, who chairs the council’s Planning Committee, defended the City Plan which will guide officials and councillors when they decide planning applications.

Councillor Littman said that the policies set out in the City Plan would “protect what needs protecting” in the years ahead.

It would give him and his colleagues a greater say in what “does and doesn’t get built” – but without it, it would be easier for developers to ride roughshod over residents’ views.

He spoke about the City Plan at a meeting of the council’s Tourism, Equalities, Communities and Culture Committee at Brighton Town Hall yesterday (Thursday 15 September). 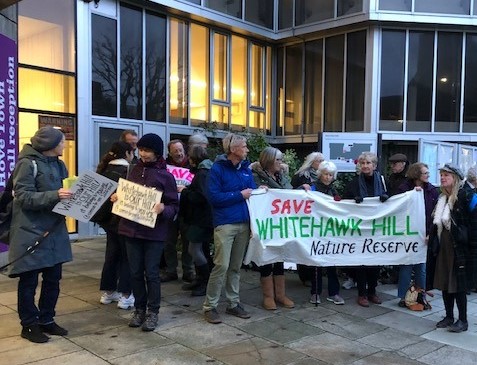 Councillor Littman said: “I’m not saying that the plan is perfect. Sadly, in at least one respect, I consider it to be far from perfect.

“I would love for us to be able to protect every single blade of grass on the city’s urban fringes from development – but we can’t.

“We need to face reality as it is a choice between protecting some of our green urban fringe sites or none of them.

“Over the years, government-appointed inspectors have made it crystal clear that in addition to a large amount of brownfield regeneration proposed, urban fringe development was required.

“The only choice we had was to accept small-scale development on the few areas of greenfield land we think we can influence or give developers free-for-all access to the urban fringe.

“In the future, if anyone suggests the local planning authority of Brighton and Hove wants to develop these sites, they will know it is not true.

“These sites were only highlighted for development to satisfy government inspectors to say our City Plan is sound.”

Labour councillor Alan Robins, a former chair of the Tourism, Equalities, Communities and Culture Committee, said that it was frustrating when people asked why the council does not redeveloping brownfield sites.

Councillor Robins said: “(We can identify) brownfield sites for development but we don’t actually own them. We have no control over if they’re used or not. That’s worth pointing out.

“We’re not using the urban fringe to develop while leaving brownfield sites empty.”

The seven sites include the Sackville Trading Estate and old coal yard in Hove, where planning permission has already been granted for more than 800 homes and building is under way.

The plan also includes 39 “brownfield” sites which are expected to provide at least 1,570 new homes and business opportunities.

The greenfield sites – 16 in total – have been earmarked for more than 900 homes on the urban fringe around Brighton and Hove.

The plan also contains proposals to limit the “density” of shared houses – or houses in multiple occupation (HMOs) – sometimes referred to as student houses.

Green and Labour councillors voted in favour of the plan but Councillor Bagaeen abstained.

It is due to be considered at a meeting of the full council on Thursday 20 October.