When a swashbuckling play about a cross-dressing pirate was booked to come to the area, it roused the interest of a Brighton man.

The musical play – Bonny and Read – tells the true story of cross-dressing pirates Anne Bonny and Mary Read who ran away to sea.

The real-life pirates of the Caribbean had a fateful encounter with the infamous Jack Rackham – also known as Calico Jack – in Jamaica.

One of those in the audience at the Ropetackle, in Shoreham, tonight (Wednesday 28 September) will be Clive Bonny, from Rottingdean, a descendant of Lancashire-born James Bonny.

James Bonny was an Irish Sea coastal sailor who married Anne in the early 1700s. They separated in 1719 after Anne fell for Calico Jack.

His descendant is a happily married fraud detector, with little in common with his ancestor, although finds links where he can.

Mr Bonny said: “My dad kept parrots, our home is constantly raided by pirate birds and my sister’s name is Susan Ann Bonny. I also like to drink Captain Morgan.”

He was delighted to see tickets for Bonny and Read go on sale and made contact with the organisers, saying: “As a renowned member of the Bonny family now living among Rottingdean smugglers, I hope to see a suitably indecent amount of blood and guts on stage. Please ask the players to tread the boards carefully.”

Bonny and Read writer and producer Claire Novello was also thrilled. She said: “How amazing to hear that someone in our audience is directly related to James Bonny, one of the characters in our show Bonny and Read.

“It will be fascinating to meet him and to hear more about his pirate connections.”

Bonny and Read tells how the two women disguised themselves as men, went to sea and joined the notoriously male-dominated world of piracy.

It has been described as an epic voyage of twists and turns and a story of exceptional female bravery, adventure and survival against all odds.

And it’s not the only time when a member of the Bonny family has had a role to play in survival at sea. 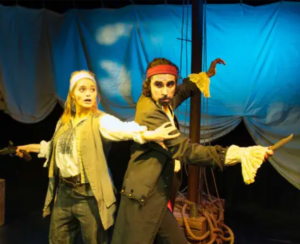 Clive Bonny’s mother, Joan Bonny, then secretary of Sussex Yacht Club, in Shoreham, played a key part in the local response during the Fastnet Race yachting disaster in 1979.

Rescue services struggled to deal with the many Mayday messages sent in force 10 conditions, 60ft waves, zero visibility and the threat of storm victims over hundreds of miles.

Throughout the night and the next day, Mrs Bonny co-ordinated radio messages from stricken Fastnet boats with the rescue services and helped save countless lives in the process.

Despite the rollicking tale on the boards tonight, it should be plain sailing by comparison.

She said: “I’ve always been interested in obscure and overlooked historical female characters. We need to hear their stories.”

It was staged at the Brighton Fringe in May and tonight (Wednesday 28 September) it starts at 8pm at the Ropetackle. To buy tickets, click here.