Spoof poster for “Sewage Fest” have been making an unfortunate splash across the centre of Brighton today (Saturday 1 October).

The pun-filled posters have appeared, advertising “a truly foul festival” and “offering VIP tickets” to water company bosses in recognition of their contribution to pollution.

The campaigners behind the posters said: “The spoof festival highlights real threat as sewage pollution across the country puts people and wildlife at risk.”

They said: “Cheeky posters have been appearing across Brighton, advertising a music festival that’s sure to kick up a stink among polluting water companies.

“With performances from Avril Latrine, the Poo Fighters and the Splash – plus many, many more – Sewage Fest 2022 sounds like an event not to be missed.

“That’s why members of the public, sick of seeing their beaches and rivers flooded with sewage pollution, have been taking to social media to invite water company CEOs along. After all, it wouldn’t have been possible without them.

“Of course, Franz Turdinand, Iggy Poop and the Stinks won’t really be heading to Brighton this year (we’ll be honest, we don’t think they’re real bands).

“But the lighthearted poster campaign comes with a very serious message.

“This summer, Brighton and Hove City Council demanded urgent action from Southern Water after ‘disgusting’ sewage was pumped on to the beach at Seaford.

“That revolting incident was one of a slew of similar events up and down the country this summer as our beloved British beaches and rivers continued to be befouled with untreated sewage.

“Earlier this month, water companies were ordered to develop tougher plans to tackle sewage pollution – so campaign group 38 Degrees wanted to remind the companies that the public are watching their response.

“And they won’t stop demanding action until this disgusting mess is sorted out.

“The posters pick out the worst offenders among UK water companies – which include Southern Water – while 38 Degrees supporters have been sending VIP ‘tickets’ to the bosses of these prolific polluters on social media.” 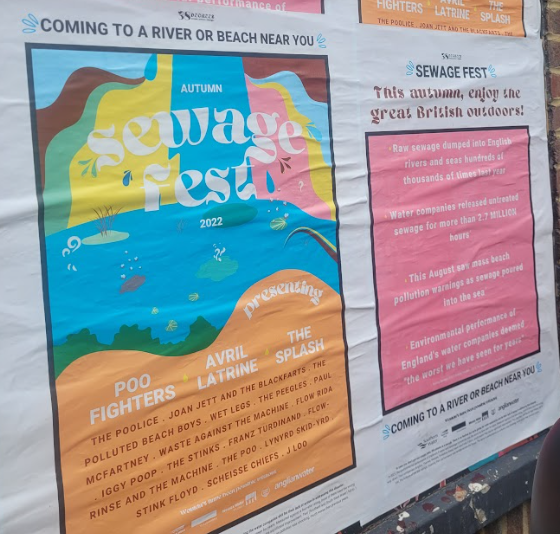 Matt Richards, campaign manager at 38 Degrees, said: “Our beaches and rivers have become a literal sewage fest – and water companies are to blame.

“That’s why we wanted to celebrate their unique contribution to our natural landscape by plastering Brighton – known for both its vibrant music scene and now its strong sewage pollution levels – with #SewageFest posters.

“Of course, we’re also offering VIP tickets to the CEOs of the top performing sewage polluters – including Southern Water. After all, it wouldn’t have been possible without them – but they might want to bring their wellies.”

The campaigners added: “Brighton residents who spot the posters are invited to join in the fun and ramp up the pressure on water companies to act.

“Snap a picture of the poster and tweet about it, using the hashtag #SewageFest.”