‘Every Day In Every Way’ TVAM are getting better 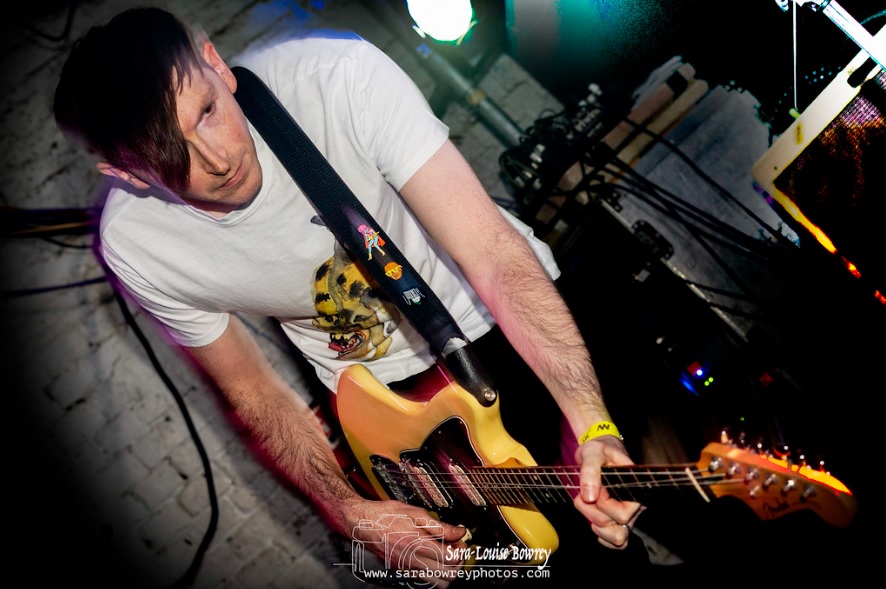 The Brighton & Hove News Music Team first witnessed TVAM – which is the project alias of Manchester based musician/producer Joe Oxley – performing live upstairs at Patterns as part of The Great Escape new music festival back on 19th May 2017 from 1:30pm to 2:00pm.
We reported thus: “TVAM is actually just one bloke who goes by the name of Joe Oxley, who hails from north west England. Joe was back in Brighton, having performed at Sticky Mikes Frog Bar in January. His next gig sounds rather interesting as it is at Jodrell Bank with Orbital. Joe plays his distorted guitar to synth backing whilst accompanied by his trusty VHS video player. We were treated to visions of crash test dummies, spacemen and the like, whilst musically you can hear the influence of Suicide, Moon Duo, Sigue Sigue Sputnik and early Gary Numan synths on the best track Porsche Majeure”. 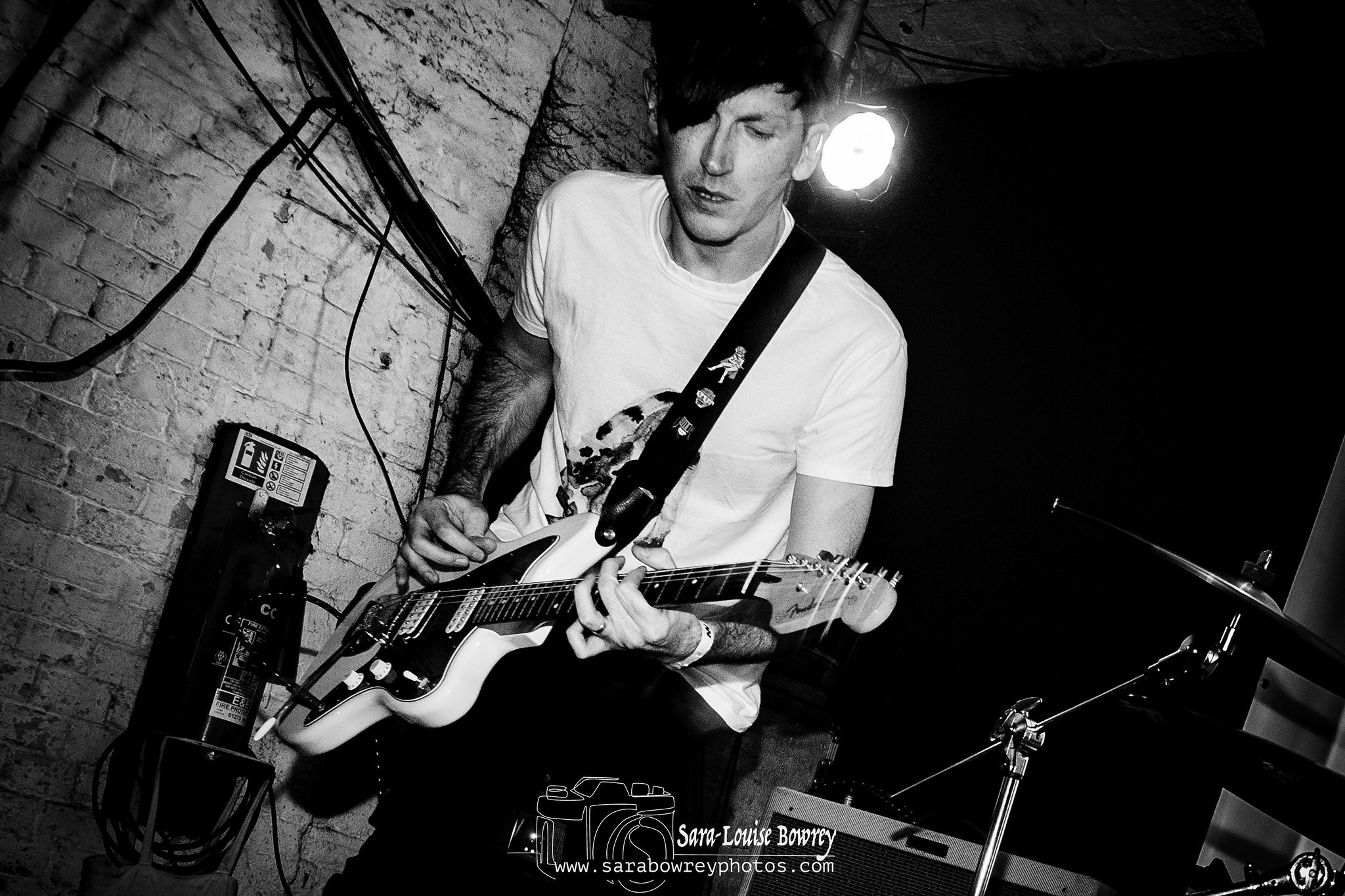 The following year, (autumn 2018) Joe dropped his debut self-released LP ‘Psychic Data’, which thankfully contained ‘Porsche Majeure’ as well as nine other corkers. It was ‘Album Of The Day’ at BBC 6Music. In 2019, the limited edition transparent yellow 7” single ‘No Silver Bird’ appeared and a performance in Brighton at the Mutations Festival on 23rd February was also given. We again caught TVAM live, this time it was at the Lewes Psychedelic Festival at the All Saints Centre on 18th January 2020 – Review HERE. 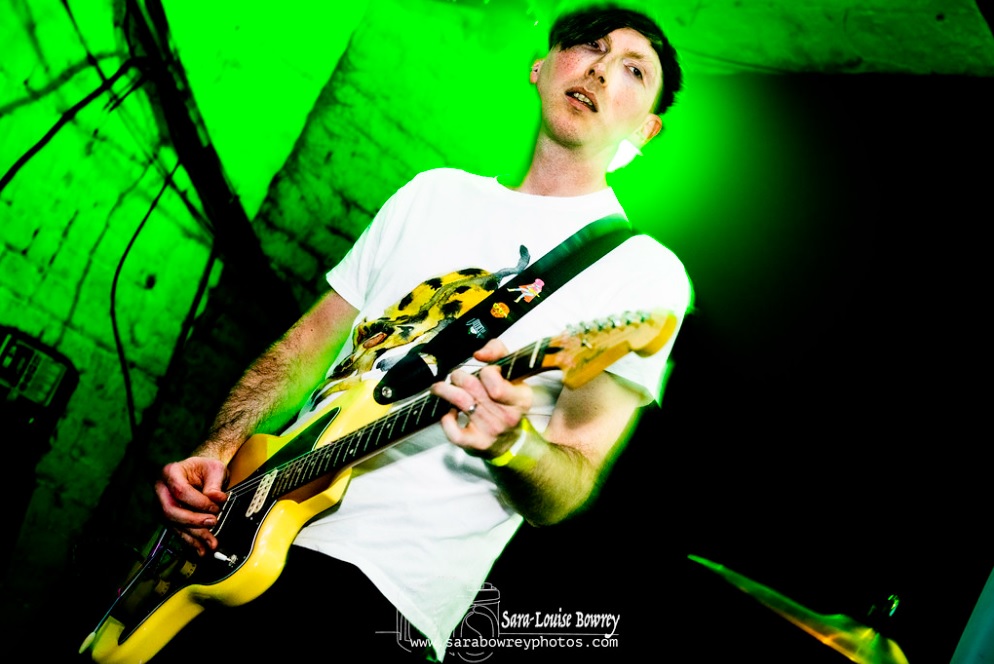 Then Covid took the world by storm and things in the TVAM camp went worryingly quiet! Until that is on the 4th March this year when the strangely titled ‘Piz Buin’ download single suddenly appeared! 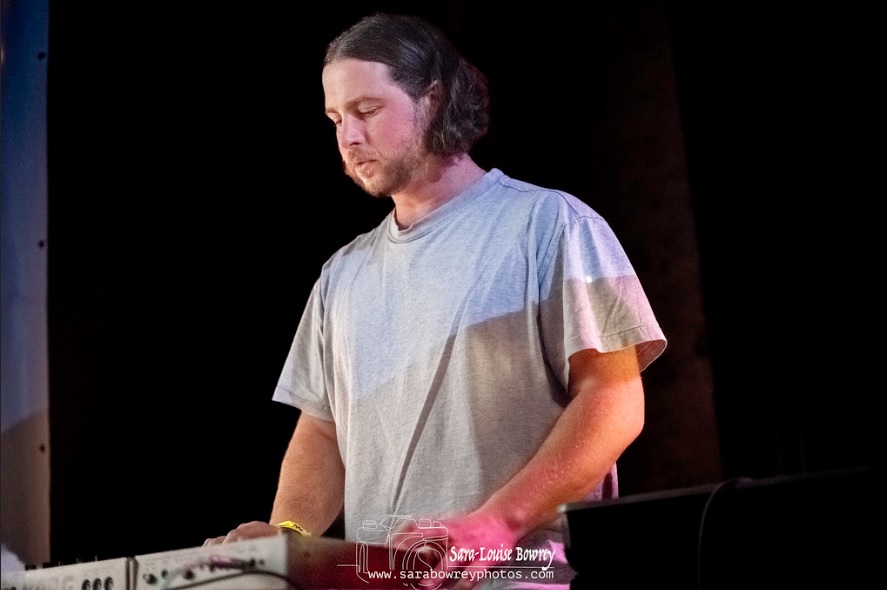 Then a flurry of download singles followed in quick succession: ‘Double Lucifer’ (on 7th June), ‘Semantics’ (on 21st September), and ‘High Art Lite’ (on 25th October). Then…BANG!…The biggie dropped just three days later, with the arrival of the second album, also titled ‘High Art Lite’ (via Invada Records UK) which contained eleven numbers, four of which were the recent singles, and another single (from the album) arrived on 16th November, titled ‘Host’. Clearly, Joe had been beavering away during lockdown and putting the lost time to great use. 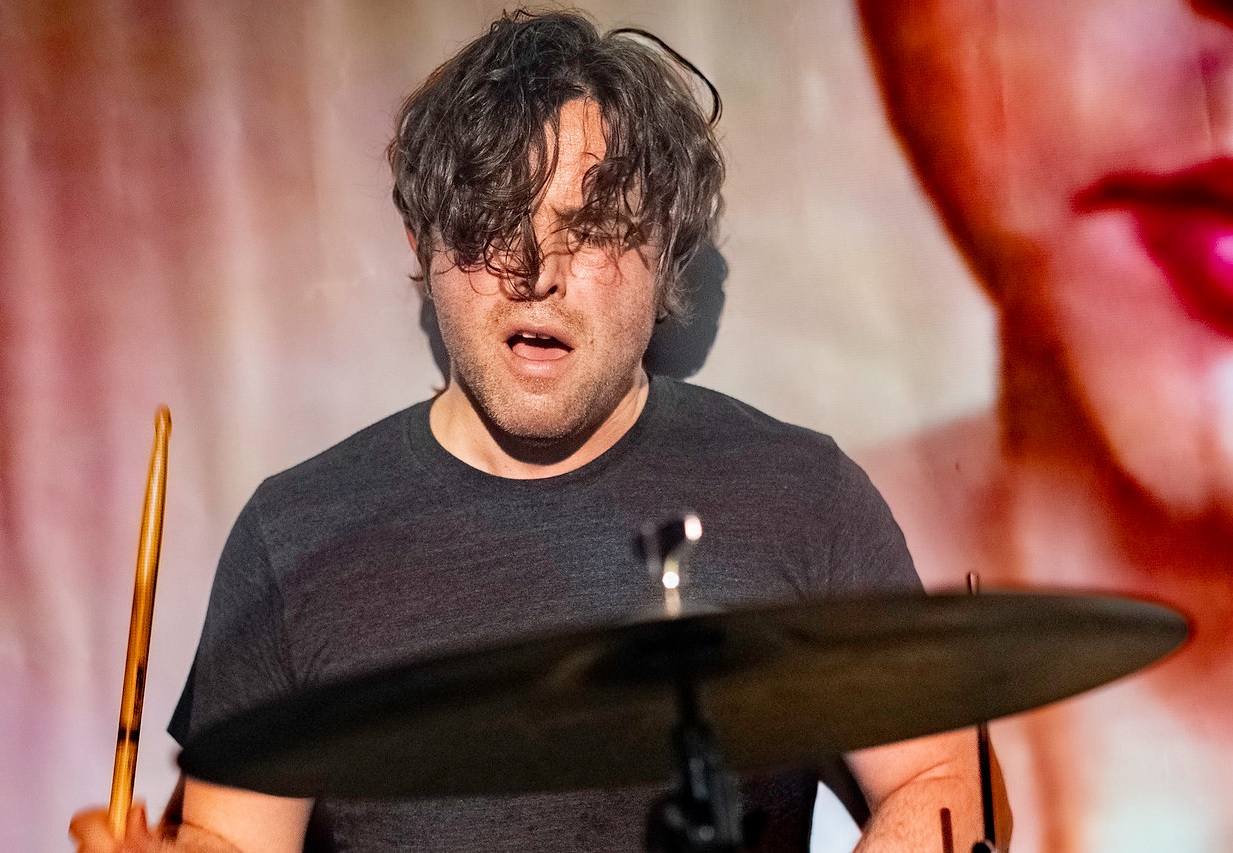 In order to promote his new platter, Joe has taken to the road for a select handful of dates, which has thus far seen him thrill fans in Leeds on 22nd November, then Edinburgh on 23rd, Salford on 24th and now it is our turn in Brighton this evening at the Green Door Store. The final date will be tomorrow in London. 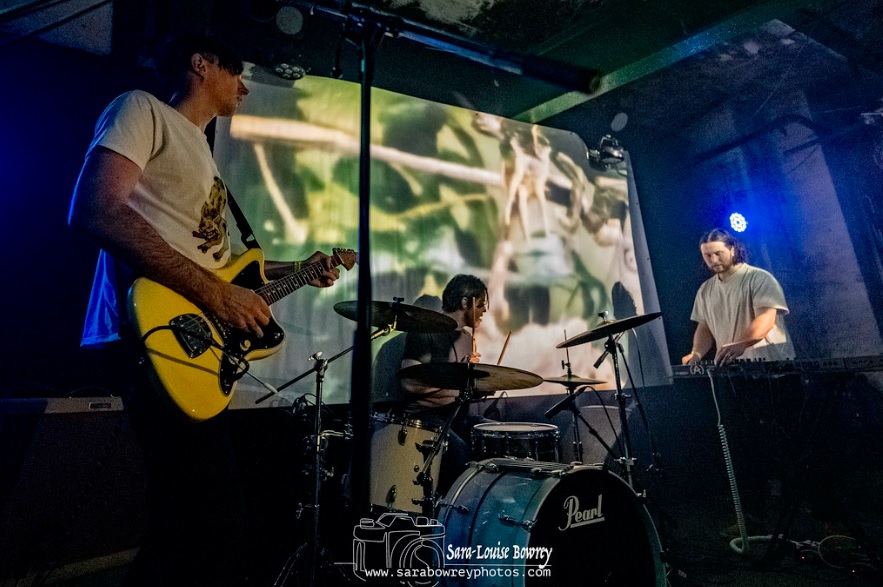 This evening’s concert was organised by local promoters Melting Vinyl, who are also responsible for the Lewes Psych Fest. Clearly the folks there can spot talent when they hear it as tonight’s gig has sold out and there’s a buzz around the unique venue. 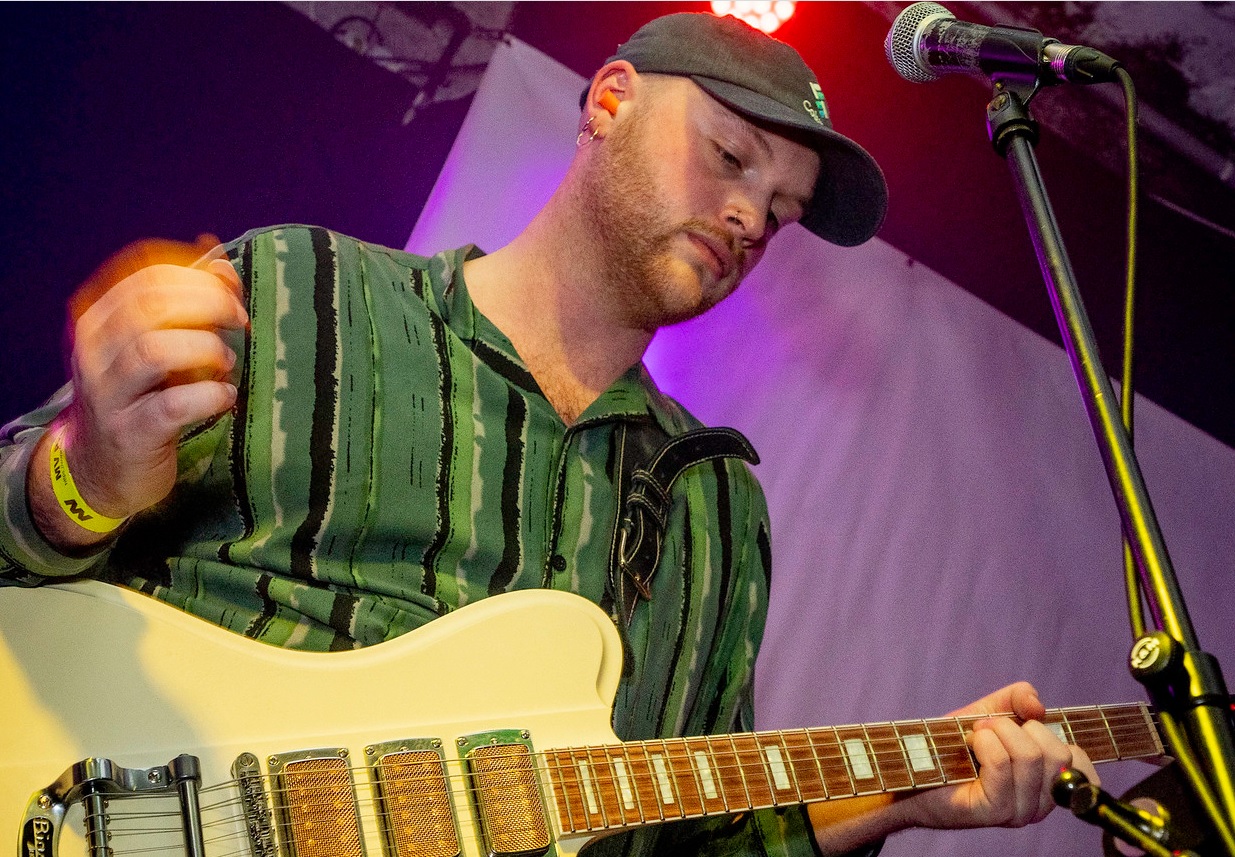 First up though are Brighton based Demonstrations who were sadly the very last band that I saw performing live before the first Covid lockdown. I was deprived of live music for seven months after their 13th March 2020 concert (Review HERE) at The Hope & Ruin. It was an uncertain world back then and I’m sure that none of us were really aware of the impact that Coronavirus (COVID-19) would have on us all, but thankfully we are all allowed to come out and play again! 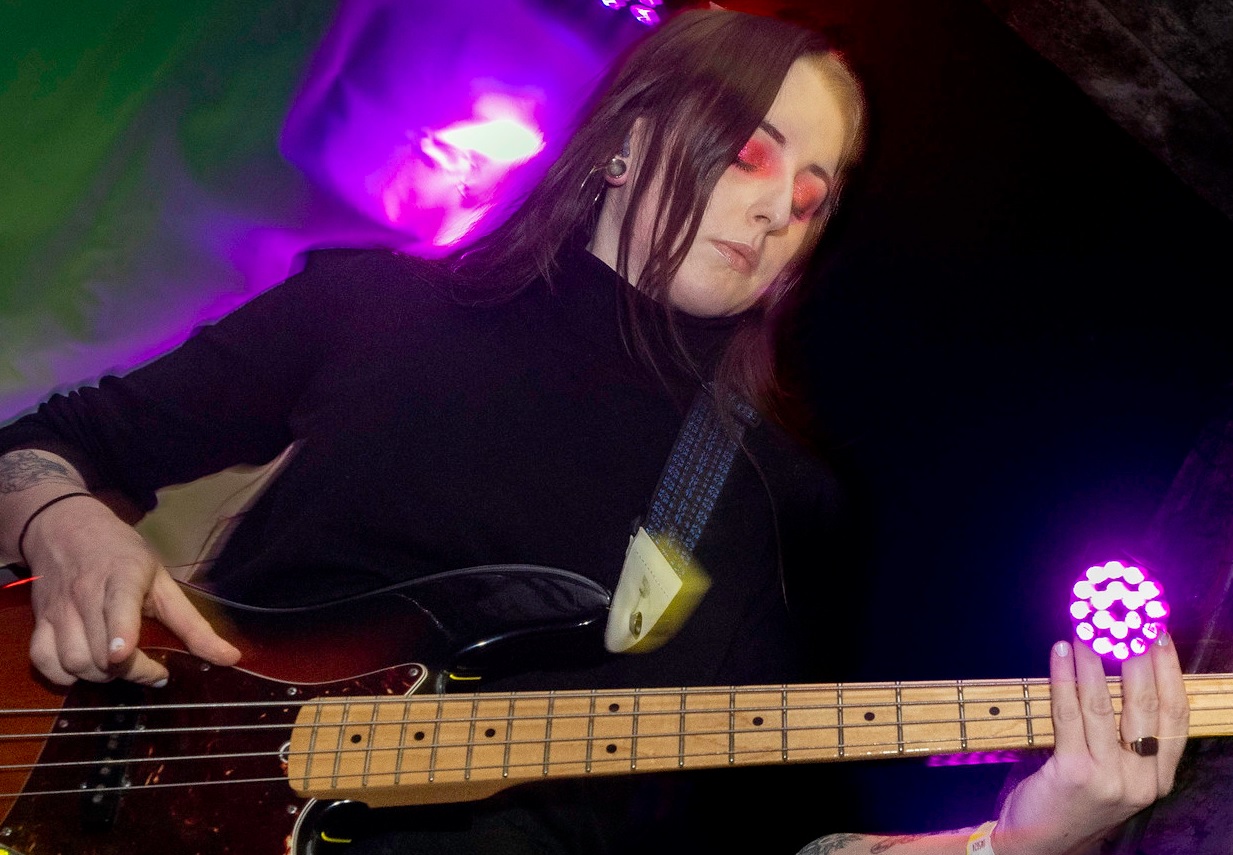 Demonstrations blurb states that they “are an alternative dark guitar pop three-piece who combine eclectic influences of 80s synth new wave and indie rock. Their live performance has been described as a raw, dramatic exploration of diverse genres – from abrasive, energised noise to enigmatic, idling back-beat motifs. Demonstrations leave an immersive, dream-like energy in their wake”. Was this to be the case this evening, let’s find out…… 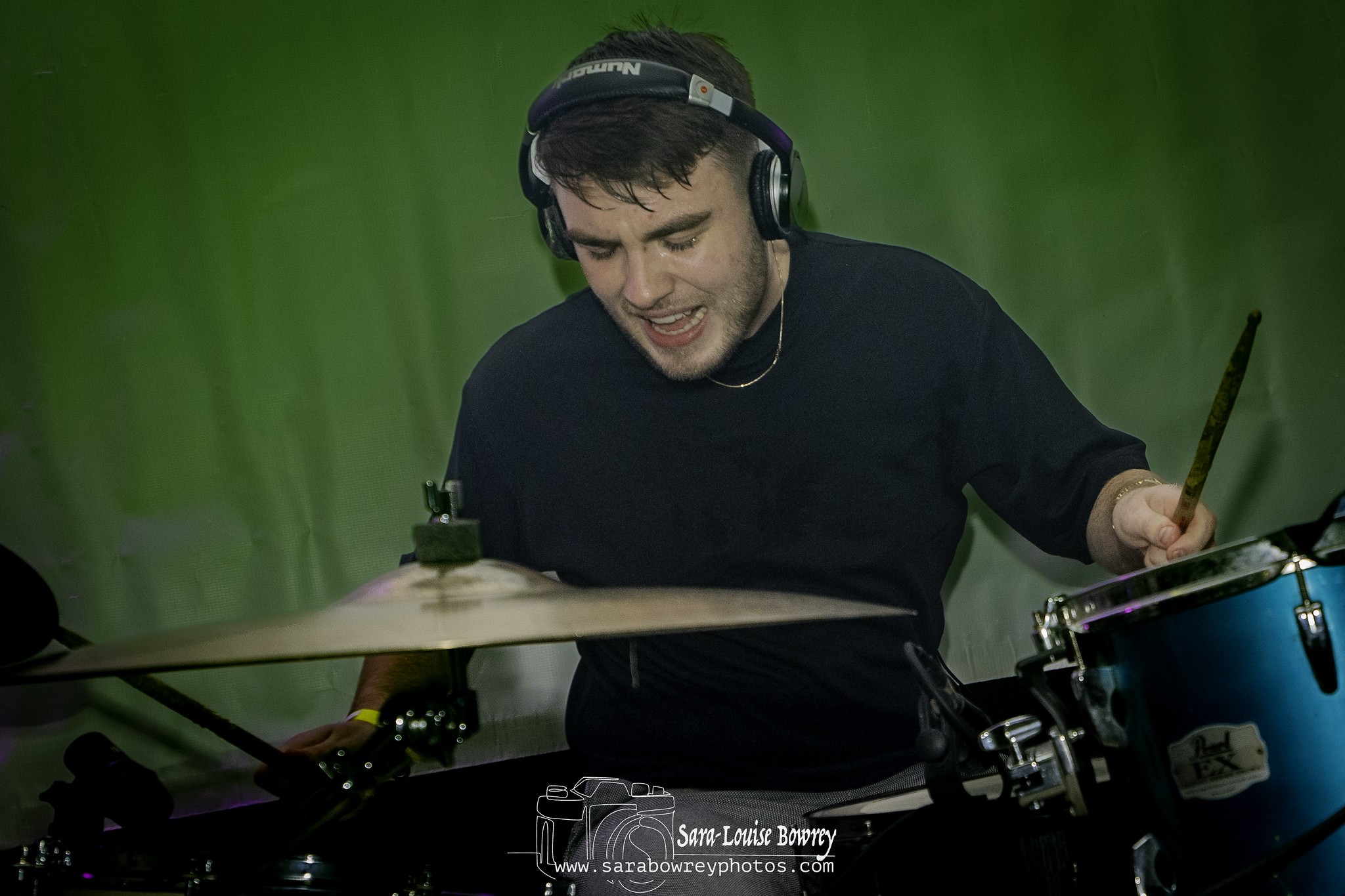 Luke (vocals, Schecter guitar), Jess Gilchrist (Fender Jazz bass) and Callum (drums, programming) graced the stage at 8:29pm and gave us nine tunes which lasted 35 minutes until 9:04pm. As their set progressed, the punter headcount grew and grew, which was encouraging for the band. I had the distinct feeling that they were feeling a little shy tonight. Maybe they were starting to get back in the swing of things? I noted that they were initially down to play here at the Green Door Store back in September for their ‘2 3 4 Fest’ (Reviews HERE and HERE), but sadly they were unable to play, but tonight would be making up for that. 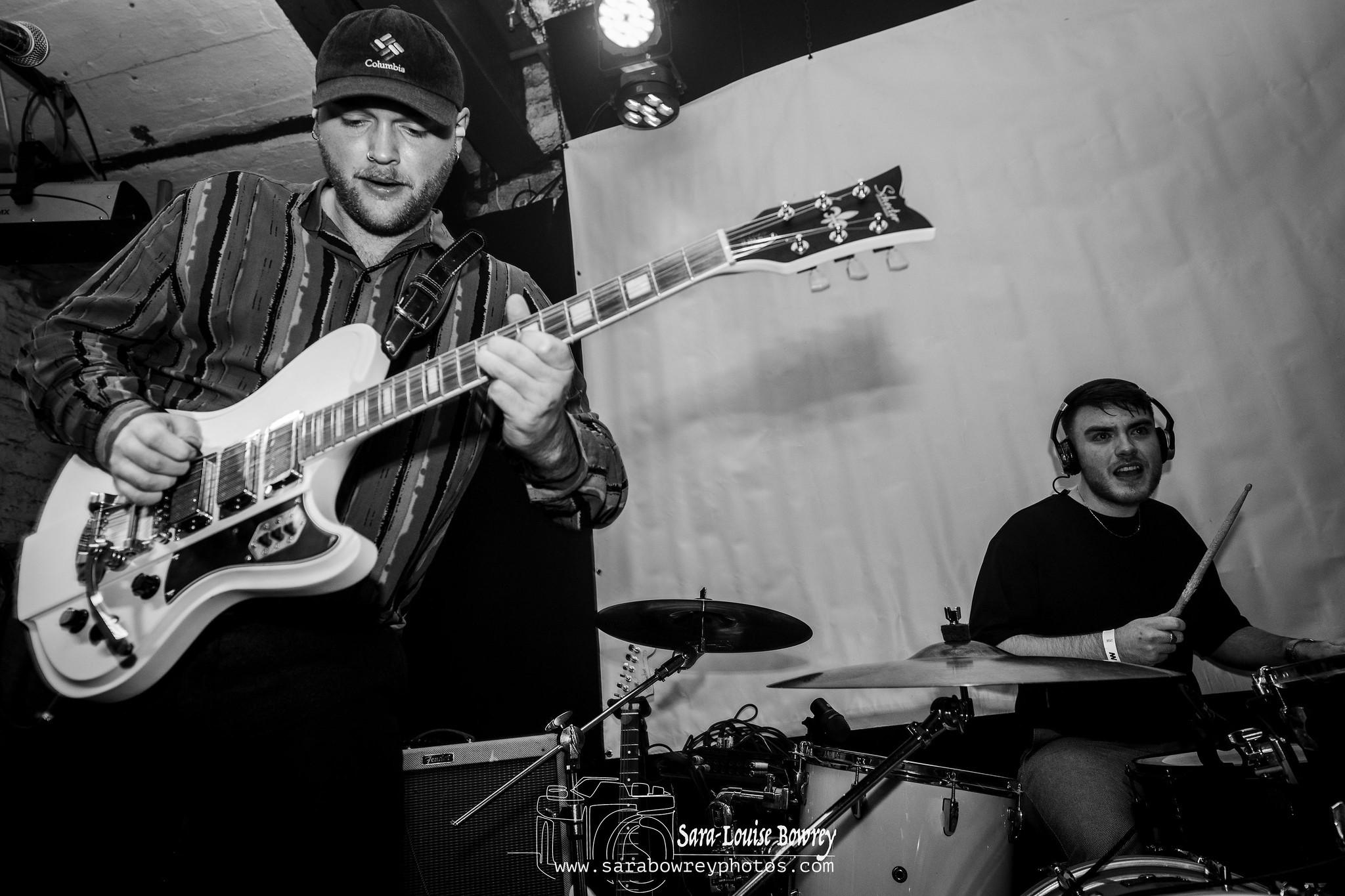 They opened their set with ‘Fabric Rings’ and latest single ‘Evening Run’ which set the tone. They were tight this evening and are clearly a trio working in harmony. Song three, ‘Clock Out’ could have almost been a pleasing mixture of Placebo vocals with Jah Wobble backbeat. 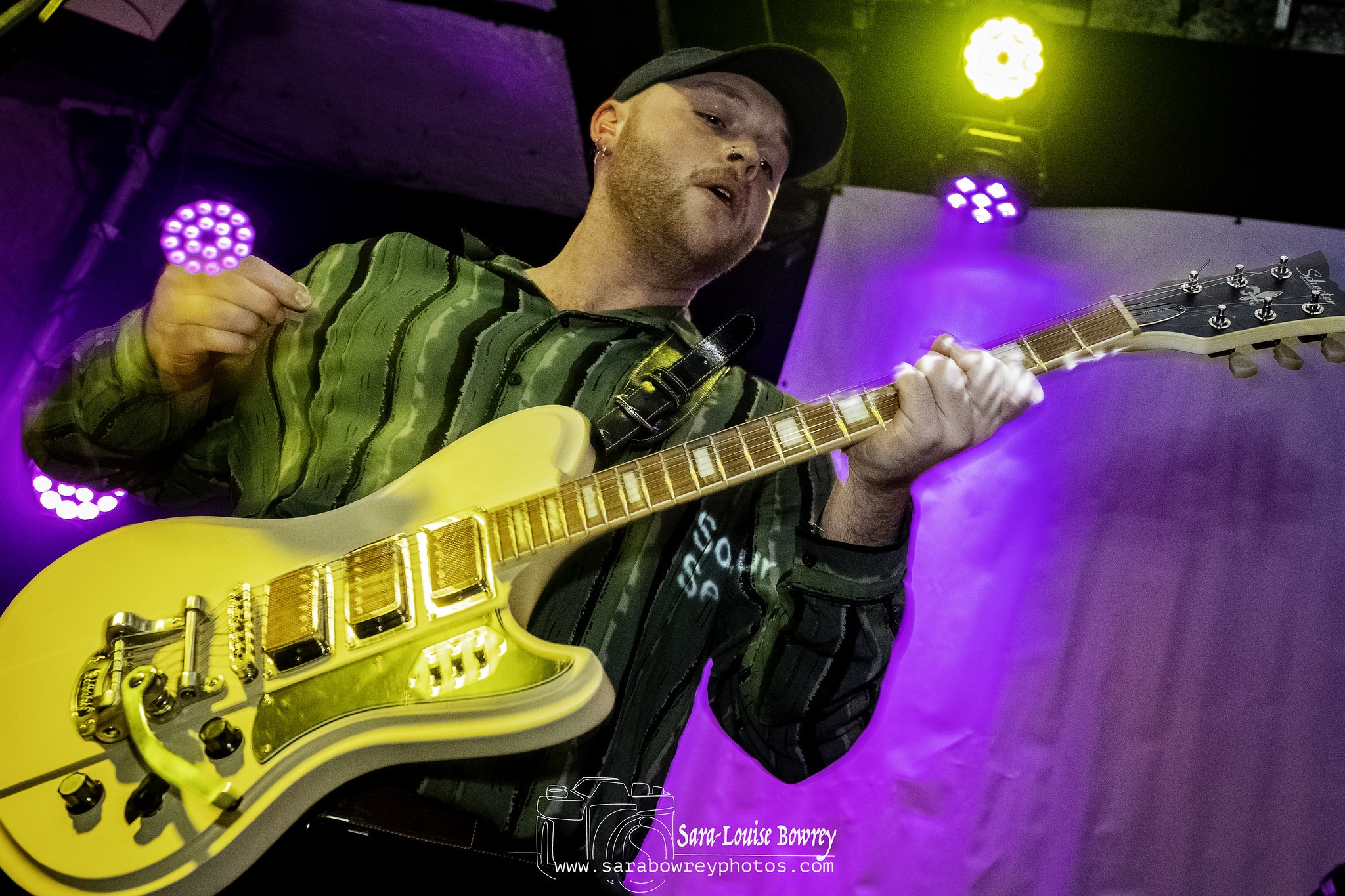 ‘Resurrection’ was up next. It’s a number that flits between slow and frenetic, clearly there’s a story there. The spring 2020 ‘Clang!’ single was next. It was louder than its predecessor. ‘Turn Around’ followed with its haunting guitar work courtesy of the Bigsby vibrato tailpiece, which allows musicians to bend the pitch of notes or entire chords with their pick hand for various effects. The Bigsby was the first successful design of what is now called a whammy bar or tremolo arm, although vibrato is the technically correct term for the musical effect it produces. 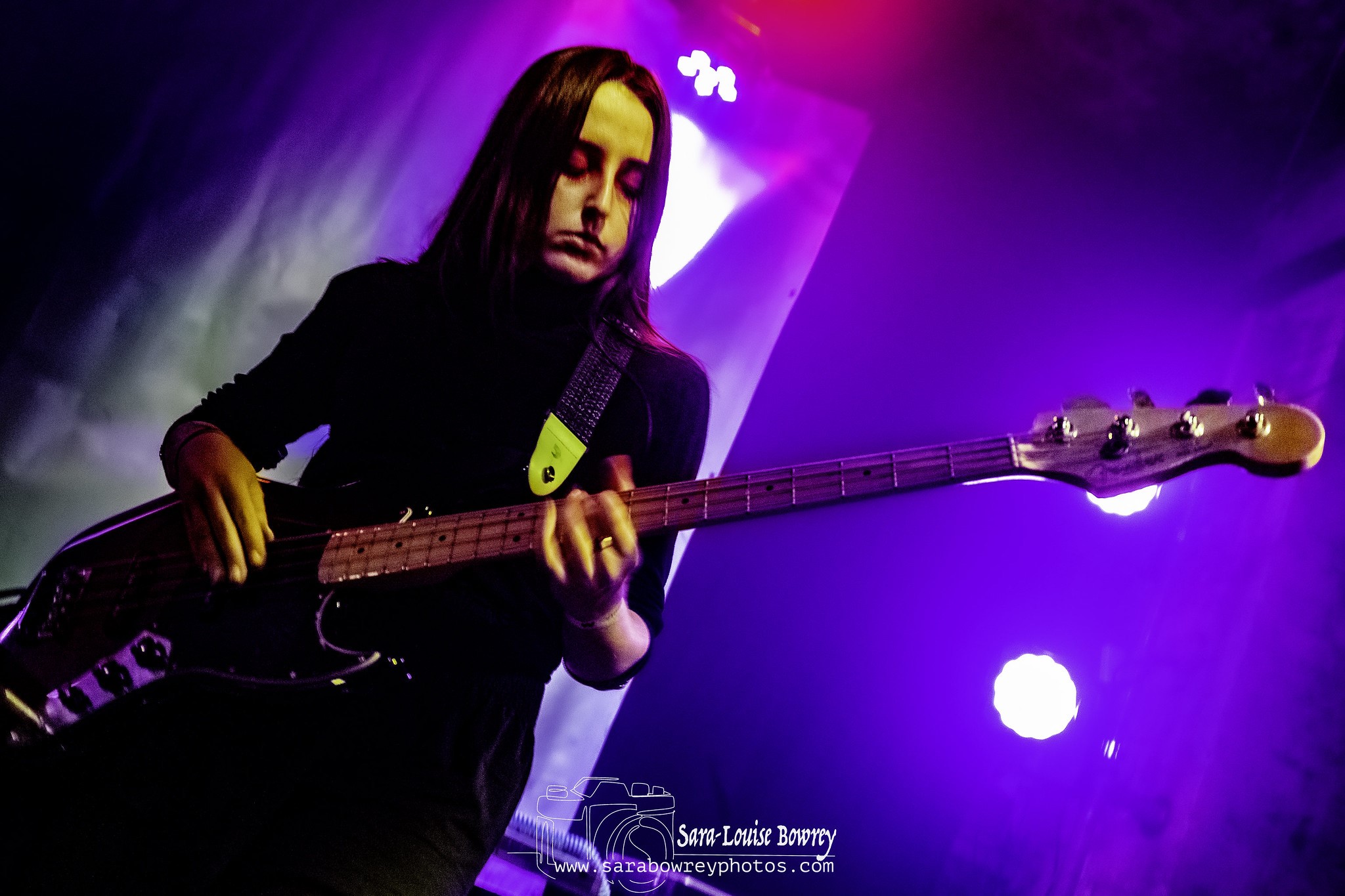 Song seven was ‘Exe-Cute’ with its slight Oasis slow vocal style delivery. Penultimate tune ‘Evil Man’ definitely had an aura of The Waterboys ‘The Whole Of The Moon’ about it. The set concluded with ‘Carbine’ which was a strong way to leave us and a sensible selection as a finale. 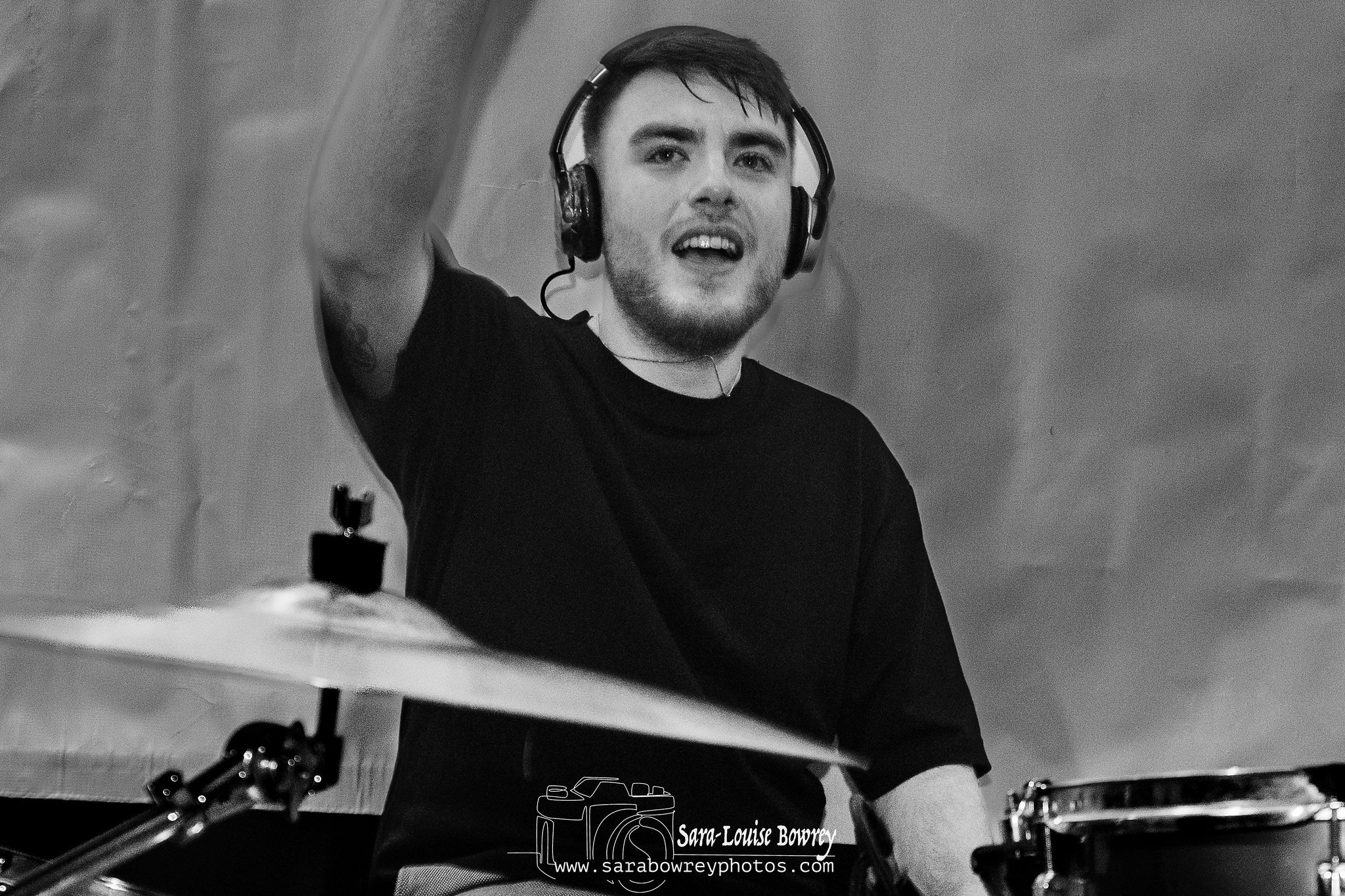 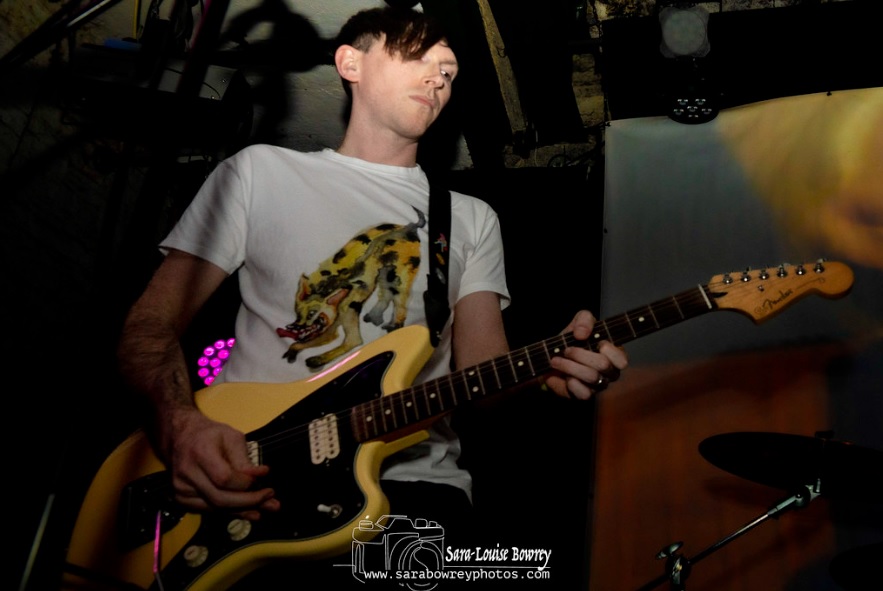 TVAM this evening have morphed into a trio, with Joe still on vocals and Fender guitar, plus Jason Hargreaves on Arturia MiniBrute 2 semi-modular analog synthesizer, Korg synth and laptop, and Liam Stewart on drums and programming. They have been a floating trio since the summer, so sometimes the three musicians perform together and at other times it’s simply Joe, like it has been in the past. 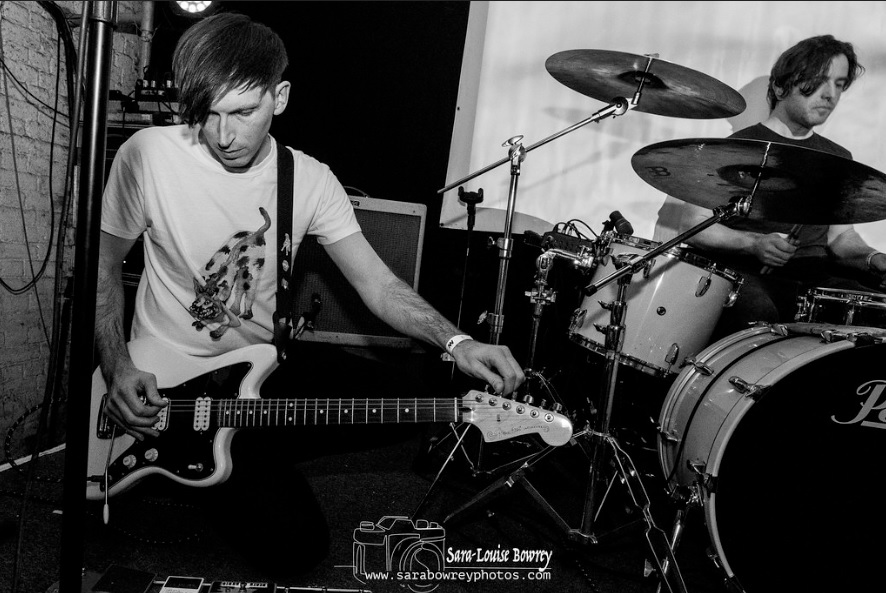 Tonight the guys performed thirteen tunes for us, with eight of those being found on the new ‘High Art Lite’ album. The remaining handful can be found on the first album, ‘Psychic Data’. The set ran for 63 minutes, commencing at 9:31pm and closing at 10:34pm. 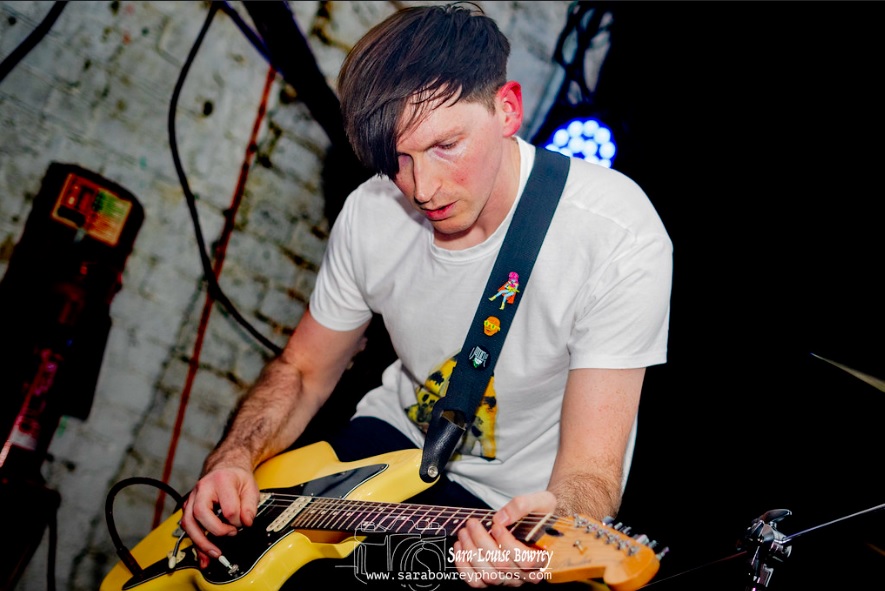 There was a large screen behind TVAM which showed various accompanying videos for all thirteen compositions, along with the title of each song at the beginning, which thankfully made logging the setlist a joy, as well as all of the lyrics for every number. This too was helpful, as with TVAM music, the lyrics are never comprehensible due to the nature of the distorted echoey mic setup. This isn’t a criticism, it’s a fact of the TVAM style. Joe had a mic to sing into and a separate mic next to it to address us. For me, it’s all about the music! 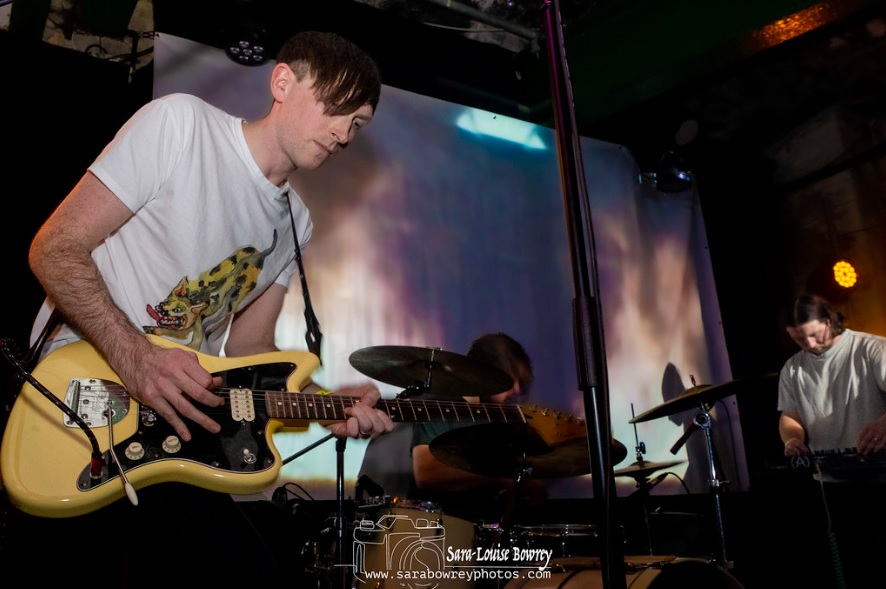 They opened with four tracks from the new ‘High Art Lite’ album; ‘Future Flesh’, ‘Every Day In Every Way’, ‘Piz Buin’ and ‘Host’, with ‘Piz Buin’ being the choice tune of the four, no wonder it was the first to be released, with its grinding synth and metronomic drums combination. 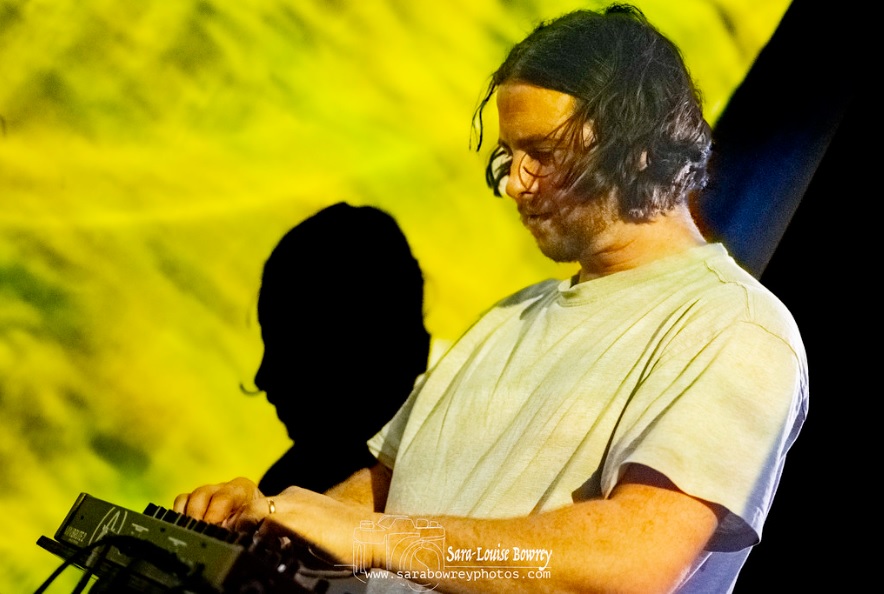 Next up was the first of a handful from 2018s ‘Psychic Data’ album, namely ‘These Are Not Your Memories’, which was like hearing welcome friend again, it’s a powerful tune. ‘Semantics’ from the new LP followed, but was eclipsed by the title tune from the first album, ‘Psychic Data’, with its repetitive Sigue Sigue Sputnik and Suicide pounding synth beat as backing. This was one of the four highlights of the performance. 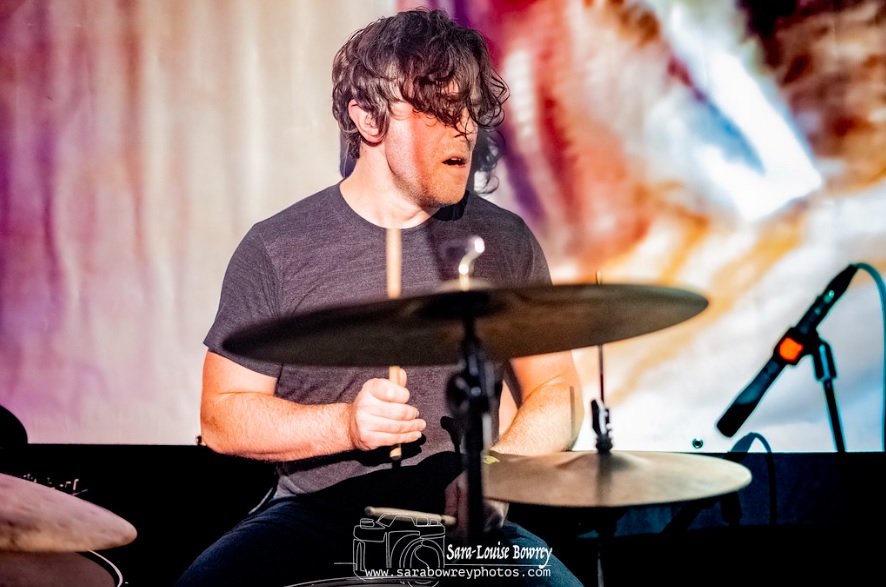 ‘Narcissus’ from the first platter was up next and hot on its heels was ‘Double Lucifer’ from the new ‘High Art Lite’ album, which itself was beaten into submission by arguably the quietest most melodic of TVAM material thus far in the form of the decent ‘Say Anything’. 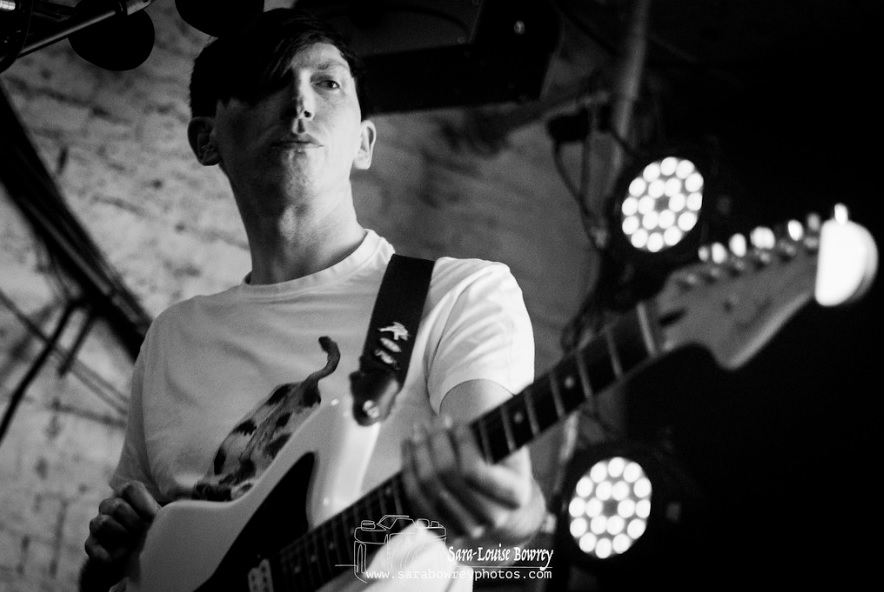 Prior to the start of the performance I was under the impression that my favourite song (again) was going to be ‘Porsche Majeure’, which came next, with its combination of screaming style Gary Numan synth sound plus forceful Fender guitar antics, and indeed it was a fantastic delivery, but it was surprisingly going to be eclipsed! 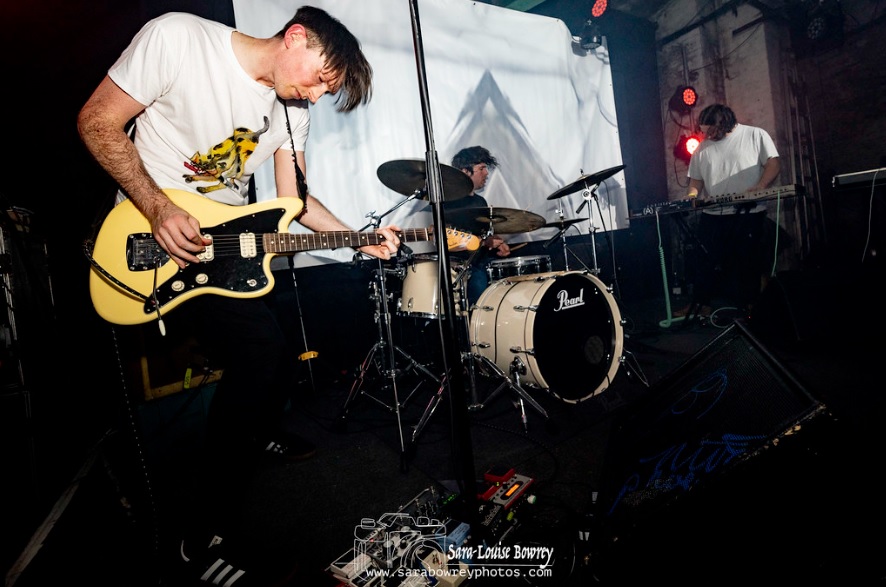 The final number from the main set was the title tune from the new LP ‘High Art Lite’, which as you would expect was a strong number. Joe thanked us and the trio went off stage for a minute and thankfully returned to perform the ‘Total Immersion’ instrumental from the first album. It was arguably the best ever tune that Neu! Never wrote! The Krautrock metronomic drumming and beat, certainly meant it was close eyes time for me in order to float away by the music! It was terrific and a fab way to end the night. 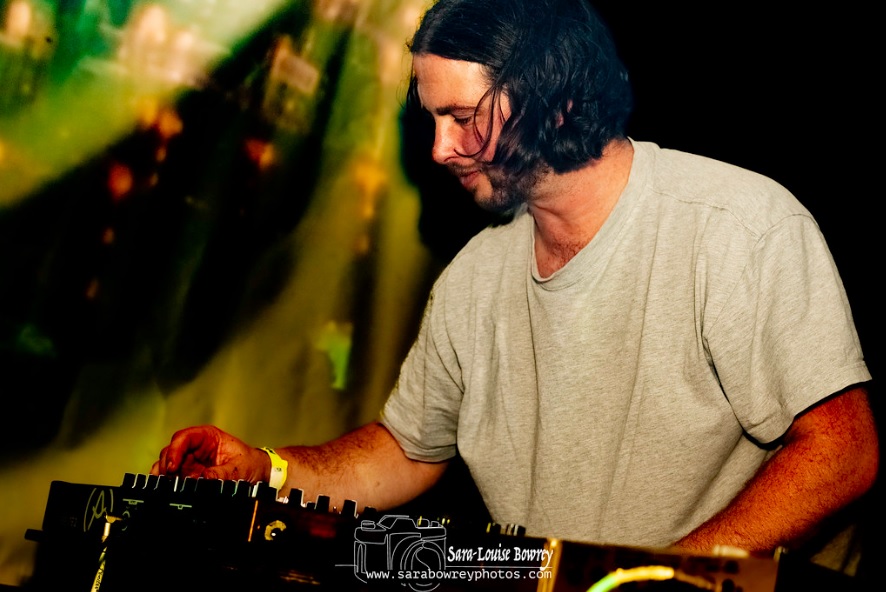 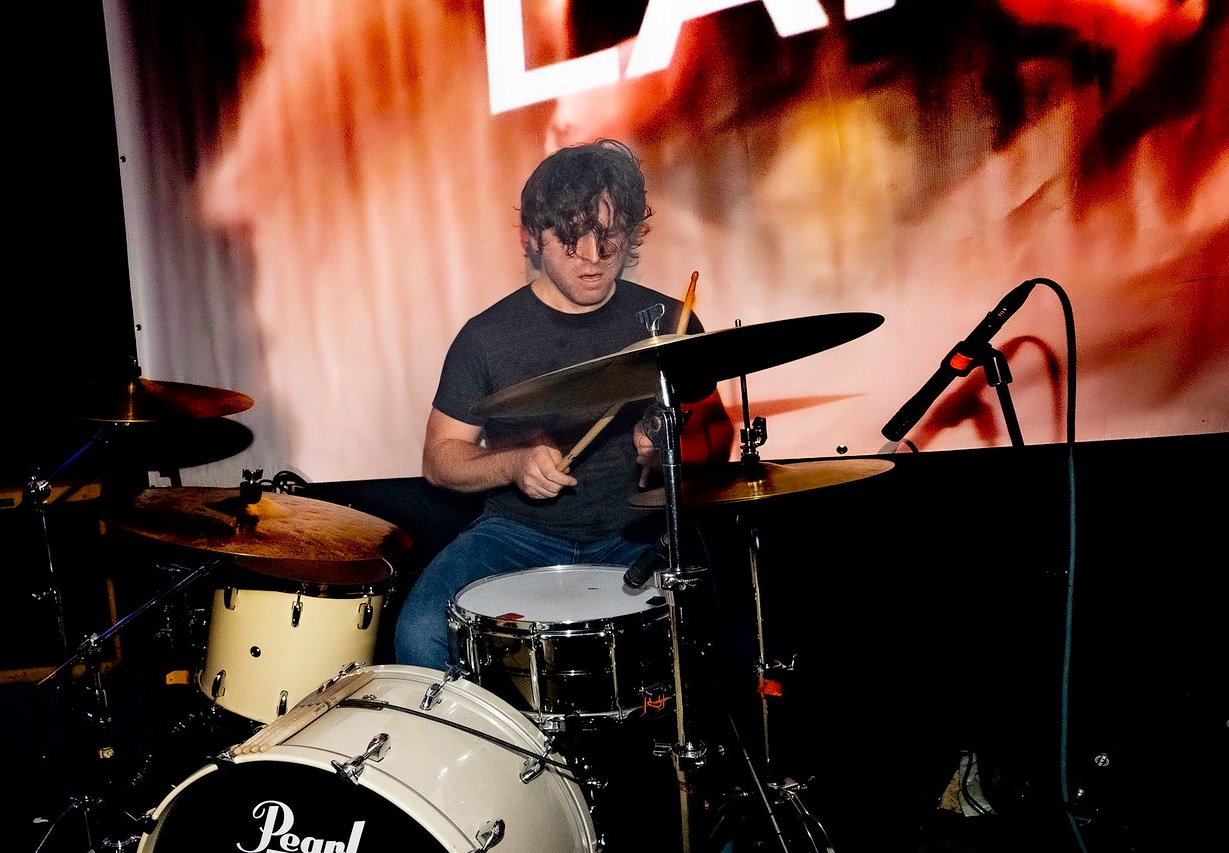 A shout out must also go to DJ Innerstrings who dropped 90 minutes of decent tunes throughout the evening, with my choice tracks being ‘Fyuz’ from Add N to (X)’s 1999 ‘Avant Hard’ album released by Daniel Miller’s Mute label and ‘Gold’ by Marble Arch from their 2019 ‘Children Of The Slump’ album. 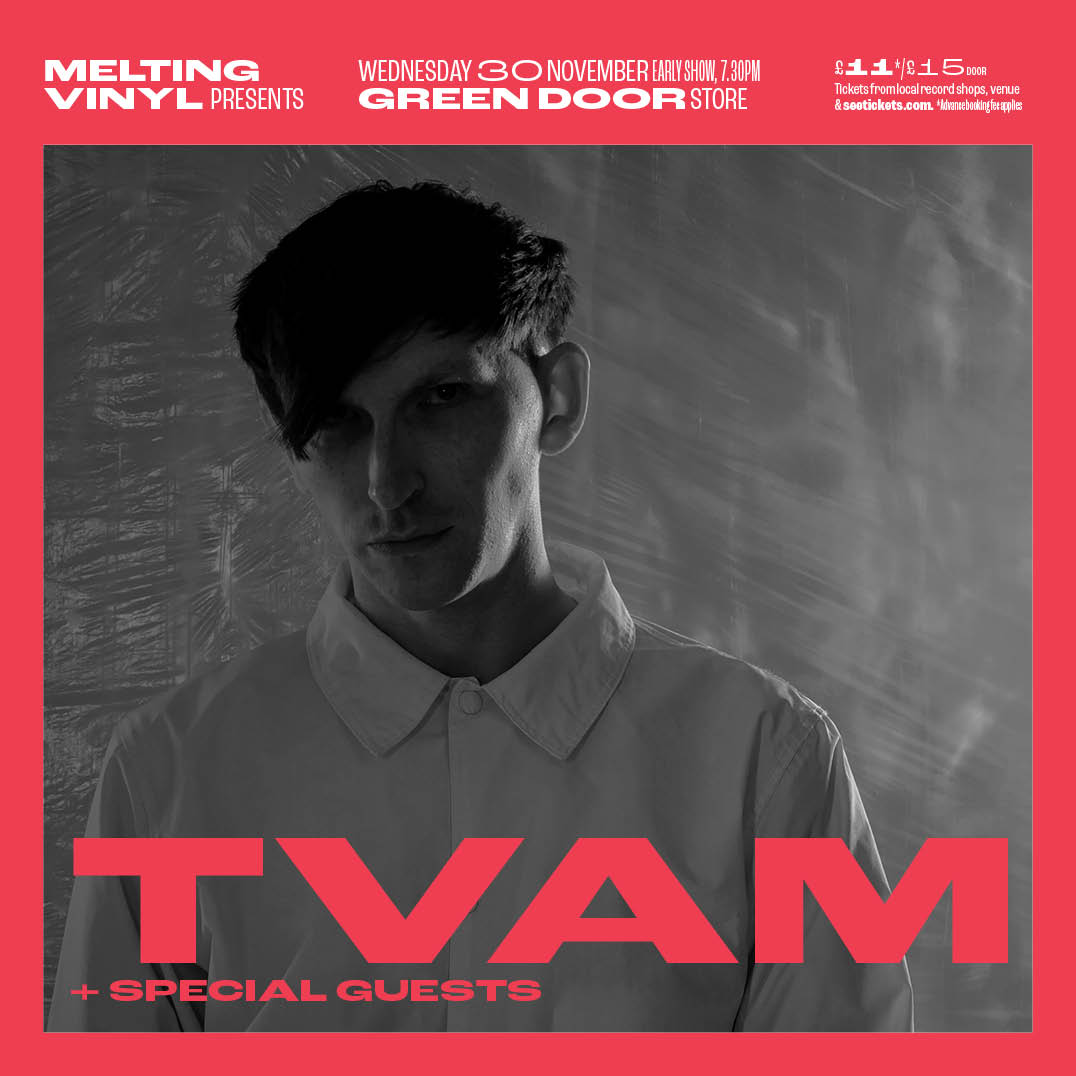 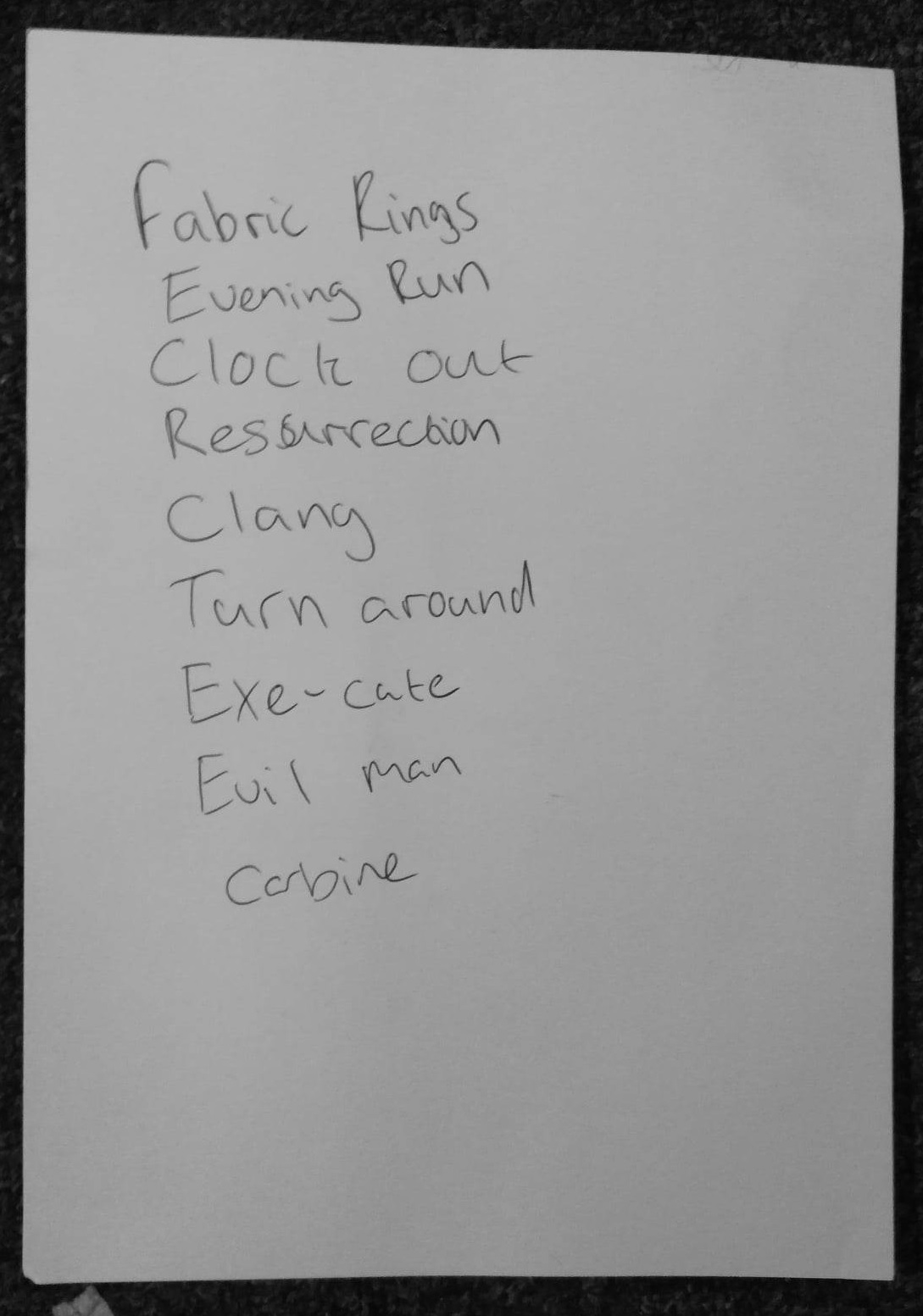 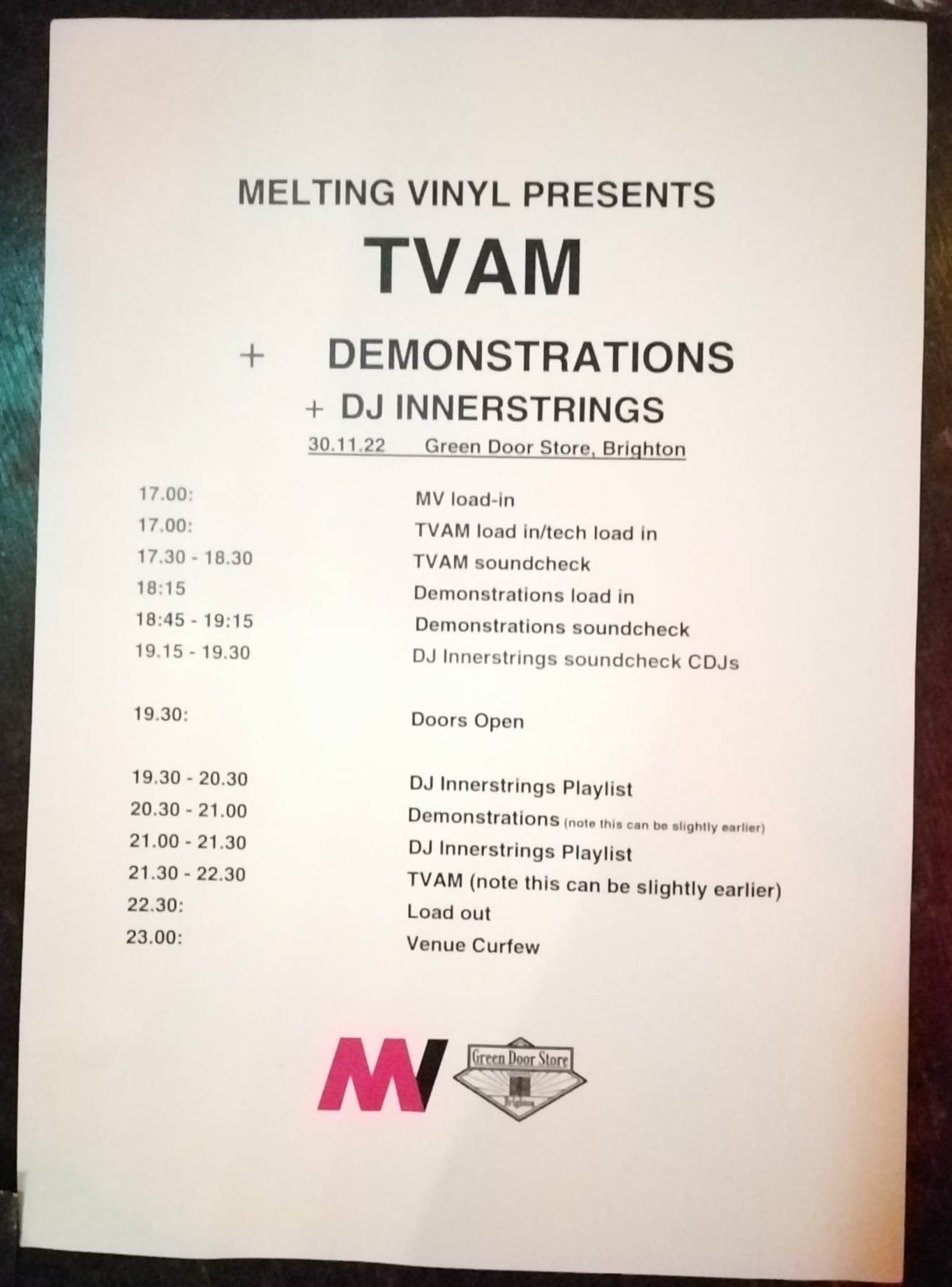 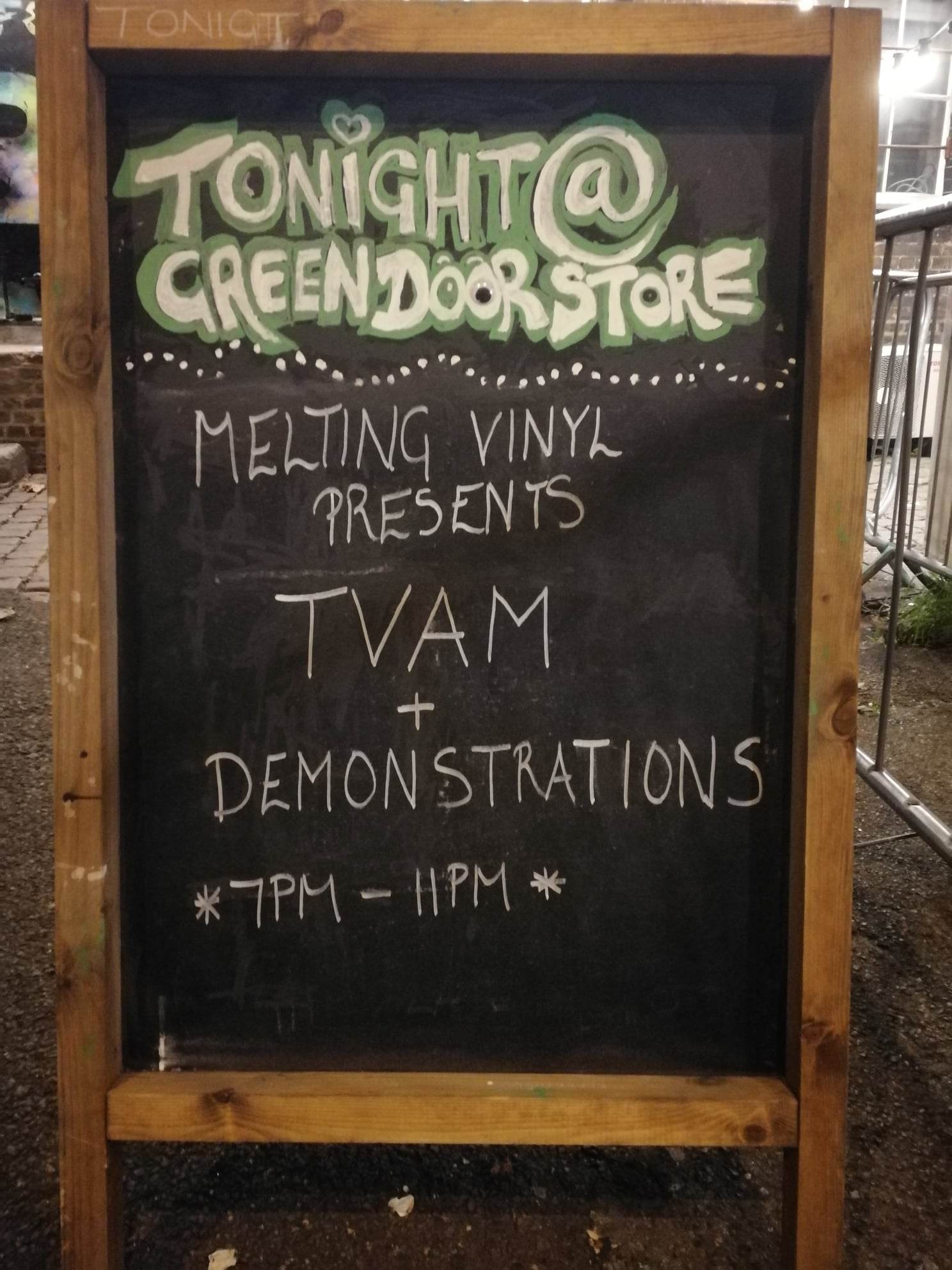