Many voters face a triple whammy on election day in May with new wards, new locations for a number of polling stations and new voter ID rules taking effect, a councillor said. 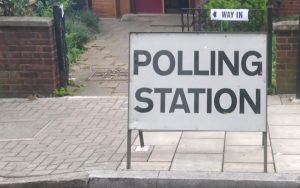 Labour councillor Amanda Evans warned of the potential for chaos as a Brighton and Hove City Council committee approved the arrangements for the local area.

On Thursday 4 May, all 54 seats on the council will be up for election although those elected will represent 23 wards rather than the current 21.

The shake up includes name changes for some wards, some boundary changes and newly created wards and a rethink about where polling stations are located.

At the same time, new rules mean that voters will have to produce photo identification (ID) such as a passport or driving licence – or a new “voter authority certificate”.

The council’s Policy and Resources Committee was told that most polling stations tend to a 15-minute walk or less from the furthest house or flat in the area that they serve.

But Councillor Evans said that some voters in the new Rottingdean and West Saltdean ward faced a 24-minute walk to vote.

In the new Westdene and Hove Park ward, she said, some voters would face a 28-minute walk.

And in the new Whitehawk and Marine ward, those furthest inland would face a 21-minute walk or have to go by bus to their nearest polling station.

Conservative councillor Alistair McNair said that two polling stations in the new Patcham and Hollingbury ward would also be more than 15 minutes’ walk for a number of voters.

Councillor Evans said: “I’m concerned about voter ID. I’ve yet to come across a member of the public that knows there’s going to be a requirement for ID.

“I appreciate the council is going to communicate three times between January and May. I’m concerned that people who don’t have the right ID will be able to get a voter authority certificate from the council. I would like to know about it.”

The Green leader of the council Phélim Mac Cafferty said that he had written to the Cabinet Office to raise local concerns.

Councillor Mac Cafferty said: “A key loophole in the voter ID scandal is they seem very tight on one end of the spectrum but on postal voting – where there has been some fraud – you don’t need ID.

“You could actually not have to walk to the polling station and not necessarily present a form of identity by using postal voting. That could be all of our suggestions to our constituents in the upcoming period.”

The government published photo ID information on Monday (16 January) and Brighton and Hove City Council is writing to residents in three wards as part of a pilot project.

Councillors were told that not all councils were writing to voters. But after the pilot, Brighton and Hove City Council planned to write to all electors.

The council also has email addresses for 70 per cent of registered voters, it said, and they would be used to flag up the changes.

To apply for a “voter authority certificate” on the government website, people need to have a recent digital photograph and a national insurance number.