As the coffin of actress Dora Bryan was carried into St George’s Church in Kemp Town yesterday (Wednesday 6 August), she could be heard singing Hello, Dolly!

And laughter mixed with tears as tributes were paid to the 91-year-old who died at the Royal Sussex hospital two weeks ago after spending her last days in a nursing home in Hove.

She starred in the 1961 film A Taste of Honey and won the Best Actress BAFTA for her role.

also appeared in The Blue Lamp, Carry On Sergeant and The Great St Trinian’s Train Robbery among many other roles on screen. 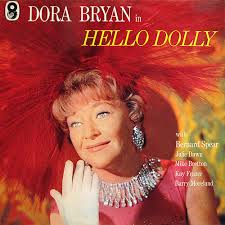 Her son Daniel Lawton gave a eulogy and a slideshow screened glimpses from her long career.

The service began with the hymn Jerusalem, which was also sung at the funeral of her husband of 54 years, the former cricketer Bill Lawton, who died in 2008.

The couple once owned the seafront hotel Clarges, in Marine Parade, Brighton.

After the service a private cremation was held at Woodvale in Brighton.