A planning application has been submitted for a small housing estate close to the edge of Ovingdean today (Friday 8 August).

The developer Lightwood Strategic, which has offices in London and Esher, Surrey, wants to build 112 homes on the Meadow Vale site, just south of Ovingdean Road.

Brighton and Hove City Council said that it had received an outline planning application but that it had not yet been validated. 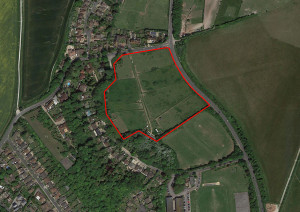 The Meadow Vale site in Ovingdean

Once it has been validated by planning officials, details of the application, number BH2014/02589, would appear on the council’s website.

Brighton Kemptown MP Simon Kirby said that he would oppose the planned estate, which is in his constituency.

The Conservative MP said that he would support the Save Our Deans campaign group alongside local councillors Mary Mears and David Smith.

Mr Kirby said: “I am totally opposed to this application.

“Meadow Vale is a completely inappropriate site for such a development, which will ruin the village feel of Rottingdean, Woodingdean and Ovingdean as well as placing a huge strain on local services and infrastructure, such as the local roads, which are already under great pressure.

“The strength of feeling against development at this site was clearly evident at the public meeting I spoke at on this subject, organised by the Save Our Deans group, which was attended by hundreds of residents.

“I have been clear that the city council needs to look at brownfield sites, increasing the density at city centre locations where the existing infrastructure is already in place and looking again at sites like Shoreham Harbour before considering precious green spaces like Meadow Vale.

“I would encourage all constituents who share my concerns to contact the council setting out their reasons for objection.

“Together we will fight this application all the way.”