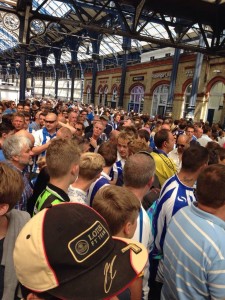 Almost half of the 26,993 fans who attended 1-0 defeat by Sheffield Wednesday passed through Brighton Station in the hour or so before the match.

Problems at the end of last season led to a review of the queueing system used to manage fans safely. But the new system didn’t work as smoothly as planned.

Southern said: “We would like to apologise to fans who had to wait for longer than usual at Brighton to get on to a train for the match at Falmer.

“Unfortunately, there was a problem with the installation of the new queuing system we have introduced which meant we had to revert to the old system.

“We are reviewing what happened with a view to ensuring the new system is installed without any further problems.”

Man and woman mugged for 30p