Pavilion Gardens cordoned off after Brighton man stabbed in the back

Part of the Pavilion Gardens has been cordoned off by Brighton police after a man was stabbed in the back. 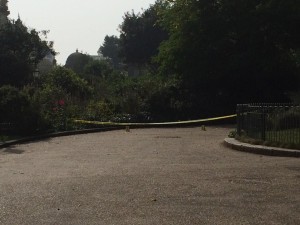 The victim is one of three Brighton men set upon by a large group of teenagers in the early hours of the morning by the cafe.

Now five police vans are on the scene, crime scene tape has been used to seal off part of the gardens and evidence numbers have been placed on the ground.

A police spokesman said: “At 5.40am morning three local males were walking through the Pavillion Gardens in Brighton when they were set upon by a large group of teenagers in the vicinity of the cafe.

“The incident resulted in one of the males sustaining a puncture wound to his back, thought to be caused by a knife.

“He has received hospital treatment for the injury and been released. Eight people were arrested at the scene and are currently in custody assisting police with their enquiries.

“Police are appealing for witnesses who may have been in the gardens at that time and witnessed the altercation.”

Brighton Museum is closed today as the entrance cannot be accessed by staff or members of the public, leading to the cancellation of today’s 3D Archaeology event, part of the Brighton Digital Festival.

Brighton Museum is currently closed owing to a criminal incident in the grounds last night. Please look out for updates on social media.

However, the Royal Pavilion itself remains open.