A Brighton commuter has told of the shocking moment when a  train hit dangling cables at City Thameslink, which has closed part of the line this evening. 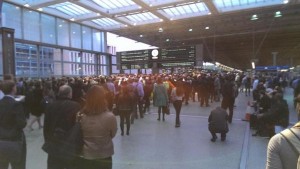 Crowds wait for the next train at St Pancras this evening. Picture by Nick Herbert on Twitter

Garry Parker was waiting on the platform at the central London station when a train took down the wires, which were left dangling.

Then when the next train came into the station, it hit the cables resulting in a big bang.

He said: “It was shocking. The cables were just ripped off and dangling down waiting to brush the next train. Which they did. Big bang.

“I was waiting for the 4.30pm Brighton train at City Thameslink when a train was moving quite slowly southbound on the northbound track.

“As the train set off, the first pantograph struck the roof (or something else) followed by a loud bang and bright flash.

“The train stopped, lowered its pantograph (the second one was in front me and I saw it drop), but the front one didn’t lower all the way.

“The train pulled away again and started to move to the other line, when the pantograph caught the overhead cables, hooked them and pulled them down causing a larger ‘explosion’ that made everyone at the station jump and pause for breath.

“Oblivious to all this, the train carried on and the live cables were left hanging between the two track lines.“Staff at the station were trying to see what the damage was and to get messages out to stop any trains coming down.“Unfortunately a message didn’t get out in time and a northbound train got hit by the cables in a couple of places with each strike causing short circuit explosions. The train stopped straight away and thankfully no one seemed to get hurt.

“I must stress that the cables were swinging a reasonable distance away from the platforms and there was no danger from them to waiting passengers.“There was at least one coach of the struck train at the platform so I assume passengers managed to get off the train safely.”

Another Brighton traveller, Warren Carter, was on the train that hit the cables. He said: “ It wasn’t that scary, just a few fireworks.

“The train was evacuated, and we had to walk to front carriage screaming!”

The whole City Thameslink station was evacuated after the incident  which happened at about 4.40pm.

There are now severe delays across the network, with trains unable to run between St Pancras and Blackfriars.

A statement on the Thameslink website said:”Due to overhead wire problems at City Thameslink, Thameslink services are currently unable to run through the station.

It adds that commuters can instead use a variety of alternative routes, including Southern Rail and Gatwick Express via any reasonable route.