Ten members of Brighton and Hove City Council are due to spend several hours settling some crucial questions that make a difference to how we get around. They will also be debating what happens when we want to stop, such as whether we will need a permit to park. Motorbikes, bus lanes and cycle lanes are up for discussion along with plans to keep our roads safe if it snows.

But before members of the council’s Environment, Transport and Sustainability Committee tackle the 19 main items of business, the public will be given a chance to ask questions and hand in petitions. And then the councillors themselves will raise questions of their own. Communal bins, rubbish collections and the footbridge at Hove Station are among their concerns. 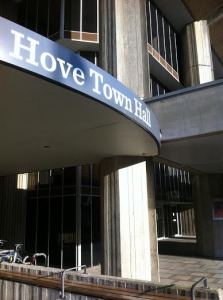 The marathon meeting is due to take place at Hove Town Hall this afternoon (Tuesday), starting at 4pm. One insider said: “Bring your sleeping bag!” The committee chairman, Councillor Pete West, will be trying to balance the brisk management of a bulky agenda and the desire to allow people to make a meaningful contribution. And the agenda is bulky. It runs to almost 500 pages – or a ream – of A4.

Members will decide whether to approve the Highways Winter Service Plan. It explains how and when the council deploys its seven gritters – armed with ploughs – and its stockpile of salt and grit. It has 420 salt and grit bins for public use. Last year with no “snow events” the council used just 230 tonnes of salt compared with thousands the year before. The plan includes advice for the residents – shovel, sweep and salt – but doesn’t appear to address the question that many ask each year about public liability.

Parking looms large. The citywide parking review suggests looking at whether to bring in permit parking in streets to the north of Preston Drove and east of the railway line. And it holds out the prospect of another look at coach parking.

There are reports on proposed new or extended controlled parking zones in Wish ward in Hove, at Baker’s Bottom, north of Preston Park Station and in the Lewes Road Triangle in Brighton. Double yellow lines by Withdean Sports Complex are on the table, so to speak.

And the parking annual report is also expected to be approved. It records profit of about £14.5 million which is ploughed back into transport projects. About £10 million supports free bus travel for pensioners. The annual report gives details of the number of parking tickets issued – almost 118,000 – and the number which were challenged – 35,000. Of those, more than half were cancelled or written off. A small number of drivers who are ticketed appeal to an adjudicator – 507 last year – with more than half succeeding on their merits or because the council dropped its case.

Today’s meeting is due to discuss the pedestrianisation of East Street, including ways of making sure beer deliveries can still be made to a couple of local pubs.

Councillors will also share their thoughts on a proposed crossing in Church Road, Portslade, near St Peter’s Community Primary School. Campaigners are pleased that there is progress but challenge the exact location of the proposed crossing.

An Open Spaces Strategy is on their agenda along with details of four potential Centenary Fields to mark the 100th anniversary of the start of the First World War. One of them, the Chattri memorial, is close to the Horsdean travellers site. With permanent pitches due to be created, the committee is being asked to approve a needs-based allocations policy. Those wanting a transit – or temporary – pitch are allocated them on a first come, first served basis.

And there’s the plan for Valley Gardens. Labour first suggested revamping the green spaces and adjoining roads. The party is less enthusiastic about the Green administration’s scheme. The cost, the details and the process are all likely to be criticised.

People may be surprised that these meetings draw a crowd, albeit smaller than the Albion, and that people watch them on a webcast – some live, some later. But few of us will be unaffected by the decisions made today.