Bad parking in Brighton’s narrow streets has long been a cause of concern for emergency services who fear their way may be blocked as a result. 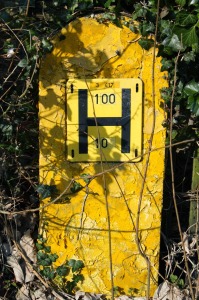 But this week, East Sussex Fire and Rescue Service launched a campaign to raise awareness of another parking peril – blocking access to fire hydrants.

The service says there have already been a number of incidents whereby drivers have unwittingly parked across a hydrant, blocking access for routine checks.

It fears if this problem is not tackled then firefighters won’t be able to hook up to the nearest water supply in an emergency.

Blocking a hydrant could lead to a £500 fine under the Fire & Rescue Services Act 2004.

Group Commander Matt Elder from ESFRS said: “Time and again we see cars and other vehicles parked in places which could block our easy access to water supplies in an emergency.

“We are fortunate that this hasn’t caused a major problem yet and we are acting now before lives are put at risk.

“It doesn’t take long to check whether you are near a hydrant and we are certain the vast majority of motorists will understand why we are asking them to take extra care.”

The new campaign aims to help people know what the hydrants look like and understand how parking across them could impact on people’s safety.

How to spot a fire hydrant: