UKIP has given its support to the Green Party’s policy of ending the right to buy for council tenants in Brighton and Hove.

The local branch of UKIP also applauded the Brighton Pavilion Green MP Caroline Lucas for her work on behalf of commuters.

In addition UKIP Brighton and Hove praised campaigners from all parties for trying to save the derelict Hippodrome.

The branch said: “We are fully supportive of the Green administration on Brighton and Hove City Council in their endeavours to bring an end to the right to buy council homes in this city. 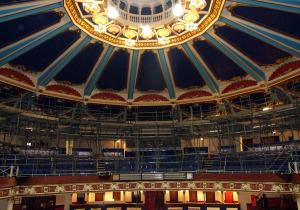 “The chronic lack of truly affordable housing bedevils our city and, if allowed to continue, will, sooner rather than later, have repercussions for our burgeoning local economy.

“We are currently working on ways to address this very problem while making every endeavour to protect our cherished green open spaces.

“We are shocked to learn that council officers have recommended increased charges for parking and permits.

“In our view, irrespective of which political party has been in power at the time, a pervasive anti-car culture has prevailed in our town hall to the detriment of local residents in one way or another and we will have none of it.

“UKIP Brighton and Hove are currently in the process of finalising our plan to get the city moving and bring a breath of fresh air by dispensing with artificially engineered gridlock and drastically reducing air pollution.

“We would also like to congratulate Caroline Lucas on her unstinting support for residents commuting to work by train.

“They have our every sympathy, as do those of our residents without convenient public transport to hand who are forced to rely on their cars.

“We wonder if Caroline’s sympathies also extend to these unfortunate commuters?”

We also wish to pay tribute to the stalwart campaigners who have come together, irrespective of their differing political allegiances, in an attempt to save the Hippodrome Theatre as a performing venue. Our party is right behind them in this.

“As with our battle to save the historic Medina Bath House in Central Hove, we wish to emphasise, once again, that one of our key pledges to the people of Brighton and Hove is to scrap council vanity projects in favour of protecting our local heritage and identity.”

It asked the council’s chief executive Penny Thompson to write to the government urging it to end tenants’ right to buy their council home.