Repairs to a partially collapsed arch on Brighton seafront are finally to be finished, nine months after a hole appeared in King’s Road. 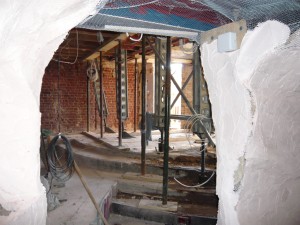 Emergency work to arches in the Life Bar, which followed repairs to the Fortune of War arch

The essential works are due to be completed this week and the A259 King’s Road fully reopened at the junction with West Street.

The road has been partially closed both east and westbound since the arch at the Fortune of War pub collapsed in April.

Work was originally slated to finish in June, then September, then November as the scale of work required was gradually revealed – but the council today announced all road works at the site should be removed by the end of Thursday, January 29.

Lead councillor for transport Ian Davey said: “It was an unlucky co-incidence that the Fortune of War hole appeared at the same time we were rebuilding the arches further west.

“But it demonstrates how important it is to renew the arches and this is the first time the council has really bitten the bullet on this since they were built over 100 years ago.

“Without the works we’re doing now, such collapses would become common and road closures more regular.”

Engineers discovered the hole was caused by the failure of historic alterations to the structure, which provided a fire escape route between the Fish & Chip shop on King’s Road and the Fortune of War public house beneath the road. Further inspections also revealed structural deterioration in the adjacent Life Bar, which is also a private property.

Strengthening and repair works have now reached a stage where the lane closure is no longer needed, as weak areas have been rebuilt to make the structure safe.

Officials say although it has been a complicated and lengthy closure, the council has done all it can to minimise its effect on drivers, pedestrians and cyclists, while keeping them safe, Any alterations to the traffic management have been made when needed, to maintain traffic flow and road safety.

Meanwhile works are continuing to rebuild a row of 33 new seafront arches beneath the A259 further west. This is part of a large, long term investment programme to restore the seafront arches. It will ensure they can support the current highway loadings from the road above for the next 120 years. Works require the upper prom and cycle lane to be closed along a 100m stretch. The road itself is unaffected.

When complete the arches will be used for commercial premises, storage and beach chalets. In a previous phase, 26 arches were rebuilt and turned into retail outlets and new public toilets. The scheme has regenerated a once run-down area of the seafront.