Roadworks on one of Brighton’s busiest streets have overrun in part because workmen discovered an old public toilet underneath the road. 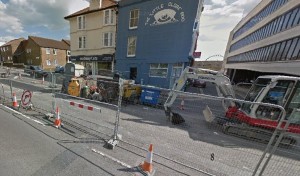 The discovery was made during work to one of the junctions, which was meant to be completed by the end of last month.

But this complication, plus bad weather, have pushed it back, with a revised estimated end date of mid-March.

Work to the pavements in Edward Street and Eastern Road was due to be finished in November, but these are also ongoing.

A council spokesman said: “Construction projects are famously unpredictable. When a date is given for completion that needs to regarded as a target rather than a promise. You never know exactly what will be found under the ground or what the weather will be like.

“In the event the weather often prevented work and we found the remains of a public lavatory beneath the surface at the junction.

“We’re improving this junction, as residents requested, by adding in much-needed pedestrian crossing facilities, we’re doing that as fast as possible and apologise for any inconvenience.”

The original projected cost of the roadworks was £1.25million, but the final costs of the project will not be available until works are complete.

The spokesman added: “We do not anticipate invoking any penalty clauses as the delays incurred were not due to any fault on the contractor’s side.”