Two members of the House of Lords visited an innovative doctors’ surgery in Hove.

Nigel Crisp and Shirley Williams were shown around the Brighton Health and Wellbeing Centre, in Western Road, Hove, where they met staff and patients.

Lord Crisp used to be the chief executive of the NHS. “I’m in recovery now,” he said. And he visited because he “wanted to come and learn about the future of primary care”.

Baroness Williams of Crosby was a Labour cabinet minister in the 1960s and ’70s and more recently the leader of the Liberal Democrats in the Lords. 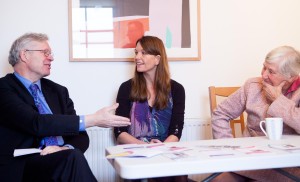 The two peers heard about the way the surgery is marrying conventional evidence-based medicine with narrative medicine which pays heed to the patient’s story – and closer attention to their needs.

Typically, a patient can expect a ten-minute consultation. But these are not suitable for every patient, some of whom end up in a cycle of referrals, tests and consultations, going over the same ground time and again.

The surgery is trying to twin with a clinic in Africa – a subject close to Lord Crisp’s heart. He said that he’d spent quite a bit of time working in Africa over the past few years.

Three patients at the practice spoke about the availability and benefits of healing art, singing therapies and dance. Acupuncture and other alternative and complementary approaches are also on offer.

One patient who tried acupuncture said: “I thought it would because load of rubbish but it’s been very helpful”

Another said: “It’s nice to have a focus on being well.”

She said that she had had a chronic pain condition for 28 years and had had a lot of medication and operations. Only when she tried complementary medicine had she had any genuine relief from pain.

She added: “Every doctor’s surgery in the country should be like this. Laura’s like a dream come true. Previously, I waited a year to see someone in pain management.”

The third patient said that receptionists at some practices can seem like someone you have to get past. “Here,” she said, “they’re very welcoming.”

One of the patients spoke about antidepressants and said: “They’re not the answer to everyone’s problems. All these things (such as the therapies) save the NHS money.” 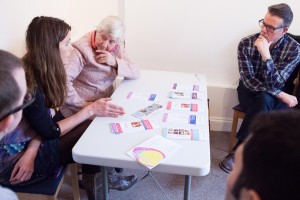 Dr Marshall-Andrews said that the surgery was setting up a charity – a Robin Hood foundation. The aim was for those who could afford to pay for therapy to pay a little extra to fund those who couldn’t afford it.

Baroness Williams asked about diabetes and obesity and praised the way that health and wellbeing were taken together.

Dr Marshall-Andrews also said: “We’ve got a big drug and alcohol problem here. From when people walk through the door we try to get them to think about how to take control of their health.”

She said that things such as art and singing helped people to feel better and happier and less likely to need antidepressants.

Francis Richards, another GP at the surgery, said: “We want to empower our patients to take responsibility for their own health.”