Two Brighton men have been arrested after a brawl between Chelsea and Spurs fans on the London Underground. 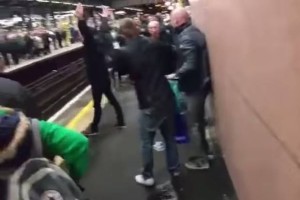 The Evening Standard reports that punches were thrown on the platform at Wembley Park station after Chelsea beat Spurs 2-0.

The fight is thought to have started after a woman’s Chelsea scarf was thrown on to the tracks.

It ended with a Spurs fan repeatedly punching a Chelsea fan then turning to the crowd raising his arms in apparent jubilation.

A British Transport Police spokesman told the Standard: “A 40-year-old man from Brighton was arrested at Wembley Park London Underground station on Sunday 1 March on suspicion of (assault causing) actual bodily harm and has been bailed to appear at a police station on Monday 23 March pending further inquiries.

“A second man, aged 35, also from Brighton, was arrested at Wembley Park station on Sunday 1 March on suspicion of common assault. He was also bailed until Monday 23 March.”

A Spurs spokesman is also quoted condemning the action of the club’s fans.