North Street roadworks show why seafront routes are a no-go

The man in charge of Brighton and Hove Buses says roadwork diversions are making a great case for why routes do not travel along the seafront. 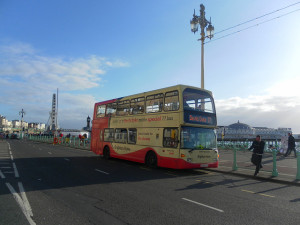 A 77 bus on Brighton seafront by Matt Davis on Flickr

Buses which would normally run westbound up North Street are this week being diverted along the seafront while work continues to widen pavements and relocate bus stops there.

And bus chief Martin Harris says the resulting delays and lack of suitable stops show why this shouldn’t be a permanent solution.

Writing on his blog, he said: “If you’ve been on a bus travelling west from Brighton’s Old Steine recently, you may well have been treated to an unexpected – and unwelcome – sea view.

“We’re not too thrilled about it ourselves. Roadworks in North Street – now about half way through their four months – mean it’s one-way only for most of our buses.

“A few folk might think this change should be permanent – that is, that buses should only ever go east down North Street and west via the seafront and West Street.

“But it’s clear from the last few weeks of misery for bus users that this means much slower journey times, bunching and cancellations, no convenient bus stops, major disadvantages for elderly and disabled people, increased safety risks in having to cross to the far side of the Old Steine and buses operating on the wrong side of the heavily congested seafront dual carriageway.

“So, anyone thinking this is a viable longer-term option, think again. The sooner we get back to two-way bus routes in North Street the better. Roll on the summer!”

Tom Druitt, founder of the Big Lemon bus company, said seafront destinations lagged too far behind Churchill Square to justify a dedicated route – but said the i360 could change this.

He said: “Of course people need to go to other places too but Churchill Square is the most popular destination by a mile. If it weren’t, buses wouldn’t all go there.

“People often ask me why buses don’t do this or that but the truth is that buses will go where the majority of people want to go.

“And if not enough buses do a particular route the only reason is that not enough people want that route.

“I’m sure if the i360 becomes popular enough it’ll probably get a service too, although I’m not aware of any plans at the moment.”

For more information on how the roadworks are affecting Brighton and Hove Buses, click here.