A Hove man who scrawled on a poster promoting Conservative candidate Graham Cox has pleaded not guilty to a charge of criminal damage. 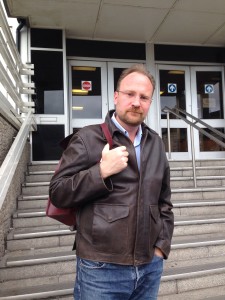 He was charged after being caught red-handed scrawling “lies, lies, lies” on the poster in Kingsway near the King Alfred Leisure Centre in the early hours of Tuesday 31 March.

Andrew Walker, prosecuting, agreed to alter the charge to criminal damage of the poster, rather than the billboard, as the wooden structure on which the poster was displayed was not itself damaged.

District Judge Timothy Boswell adjourned the case for preparations for a trial to be held at the same court on Monday 17 August.

Duty solicitor Talia Martin, defending, said that Morgan, of Westbourne Grove, Hove, would be representing himself at trial as legal aid had not been granted.

Morgan admits that he defaced the poster but not that he damaged it. He said that the Tories did not incur any financial loss, they did not replace the defaced poster and another organisation’s poster went up in its place three days later. 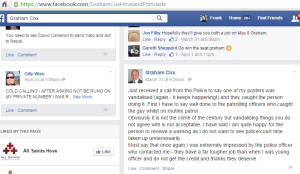 He said that he intended to call Mr Cox, Hove’s former police chief, as a witness. He pointed out that Mr Cox had written on his Facebook page that it was “not the crime of the century”.

Mr Cox wrote: “I am quite happy for the person to receive a warning as I do not want to see police/court time taken up unnecessarily.”

The offence carries a maximum penalty of three months in prison or a fine of £2,500.