Developers have made a fresh bid to build a multi-storey block of student housing on a hand car wash at the Vogue Gyratory. 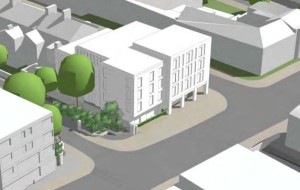 An artist’s impression of the development

McLaren’s plans to build 65 flats in a five-storey block at 119 Lewes Road were unanimously rejected by Brighton and Hove City Council’s planning committee in February.

Now, it has submitted revised plans for 52 studio flats in a part three, part four-storey building.

The previous plans were backed by the University of Brighton, but although a letter of support relating to the previous application has been submitted with the new plans, the university is not currently supporting them.

McLaren has already started work on a four-storey building on a neighbouring site at 112 Lewes Road.

And it has also submitted a retrospective application after it demolished the Hub pub so the site could be used for constructing both these developments for two years – with more student housing planned for that site in the future.

Fourteen people living in neighbouring homes in Gladstone Place were among the objectors to the building first proposed, which they said would tower over their homes.

Brighton man wanted for to recall to prison