An advertising shroud is set to be put around the Royal Albion Hotel while refurbishment works are carried out. 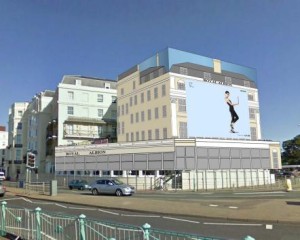 King Media Management has applied for permission from Brighton and Hove City Council to put the fine, recyclable PVC mesh around the hotel for six months.

It will feature an image of the frontage of the hotel and an illuminated advert.

Britannia Hotels has given King Media Management permission to sell advertising on the shroud if permission is granted.

The planning application states: “The scaffold safety screen is a health and safety requirement while the works are carried out to the building.

“The screening prevents debris falling and also protects the façade of the building while works are being undertaken.”

It adds: “The colour and content of the advertisement display panel will vary during the period, however it will consist of simple graphics and limited typography, complying with the standards and regulations laid down in the Code of Advertisers Practice by the Advertising Standards Authority.”

It says similar advertising shrouds were approved at nearby 39-40 Old Steine and 39 Kings Road.