Volunteers across the city will be celebrated at an event at Brighton Museum tomorrow to thank them for their hard work.

A whole host of people who help people to access and enjoy the council’s culture services and open spaces, from delivering library services to those unable to leave their homes to tending the city’s parks and looking after the country’s oldest electric railway, will be thanked.

Broadcaster Nicholas Owen, himself a volunteer train driver on the Volk’s electric railway, will be guest speaker.

Council leader Warren Morgan said: “Volunteers are the unsung heroes of our public services. They enhance and complement what we do, freely sharing their expertise for the benefit of the city.

“Hundreds of volunteers working in libraries, museums, open spaces and tourism make an outstanding contribution which is much appreciated by residents and visitors and the council wants to thank them for their commitment and passion.”

The range of volunteering in culture, leisure and environment in the city includes supporting people learning about IT in libraries, leading Healthwalks and even being urban shepherds.

Jane Hawkins formerly worked as a volunteer Healthwalks leader. She said: “What made Healthwalks special to me is the reward of seeing the walkers that I helped, many of whom have been struck by some of life’s bitterest blows, blossom and gain in confidence and self-esteem, as well as becoming healthier and fitter. Their personal stories and their courage and cheerfulness never cease to amaze me.

“Healthwalks can’t cure everything, but they sure as heck make people happier, healthier and better able to cope!”

Volunteers also put in time to maintain open spaces, parks and gardens, and support conservation and outreach work at museums.

Most recently VisitBrighton recruited volunteer city champions with local knowledge to help visitors get the most out of the city.

Greeter Mike Laslett said: “I enjoy sharing less well known aspects of the city with foreign tourists who would otherwise only discover the Pier and Churchill Square.

“Even local people have been surprised at the wealth of history we are able to reveal on a brief stroll around the city centre. It is good that we can tailor our walk to the needs of the individual visitors and their particular interests.”

Cllr Alan Robins, lead member for culture, added: “There are so many interesting volunteering opportunities in Brighton and Hove that support people to make the most of our culture, parks and countryside and this event aims to show how much we appreciate the contribution of the people who give their time so freely.”

Library home delivery service volunteer Janis Simmonds said: “It has proved to be a delight to be able to share stories and time with my allocated clients and when I see one of my ladies waiting at the window for me I know they appreciate it too.” 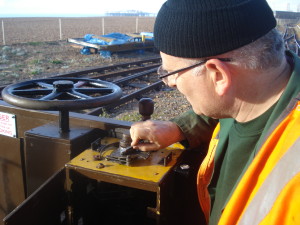 Les Kenward has a lifelong passion for railways and fulfilled his childhood dream when he gained an apprenticeship with British Rail in 1974.

His career has spanned more than 40 years and he has extensive knowledge of all aspects of electric trains, both modern and dating back to the 1920s.

Les is a valued volunteer engineer for the Volks Railway and also writes staff exam papers. On his regular day off from work, every third Monday, Les can be found on the line at the Volk’s Electric Railway or at the workshop.

Les said: “My first job was to assist with the jacking up of one of the cars which had a defective axle bearing. This was a task I had been involved with before using overhead cranes but not with manual jacks. It was an introduction to the varying weather conditions encountered when working outside on the railway.

“The main reason for volunteering on the Volk’s Electric Railway Cars is that it means I can work on types of equipment which I had worked on in my early years, but had disappeared from the main line railways many years ago as everything is now computer controlled.

“Although there is only a small band of Volk’s Railway volunteers, sharing the interests between us has helped the gang to gel together and knuckle down to get most tasks completed ahead of time which is very satisfying.”

Ruth Baxendale is a Friend of the Three Cornered Copse, a rare area of woodland in Hove. Ruth and a team of volunteers look after the 13 acres of open space on regular work days, clearing scrub and picking up litter, putting in bat boxes and benches, repairing paths and dealing with weeds.

She said: “I got involved because I could see the area was deteriorating and I wanted to do something about it. We get the support of a ranger and it’s a great way to meet local people. We have a very good turnout on our work days.

“There’s a good social side – we have an annual barbecue – and we’ve learned how to manage a copse and preserve one of the city’s ‘green lungs.’”

The work that Ruth and other volunteers carry out means that the open space is enjoyed by local people and is a haven for wildlife. As well as a variety of nesting birds, there are badgers, foxes and bats living in the copse.