A spate of broken rods and severed fishing lines has sparked speculation that a monster may be lurking off Brighton Marina. 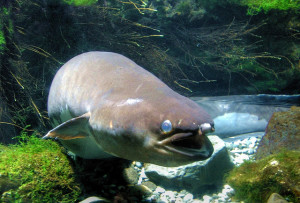 Fishermen are telling increasingly tall tales to account for the “unusual activity” which has been spotted off the east wall of the marina over the last two weeks.

A seal, a large bass and even a basking shark are some of the favoured theories – but the most likely explanation is that the culprit is a conger eel.

Frank Parker from the Tacklebox fishing shop at the Marina, said: “It’s unusual activity for the area. Over the last two weeks, there’s been two rods broken and a rod flying over the wall headed for France.

“On Thursday morning a large bait went loopy in the water creating a mini whirlpool for a few seconds and the trace [the wire at the end of the line] was severed through.

“There’s been speculation on what might have caused it and various theories, like a large bass or a basking sharks, silly things.

“The smart money is on a conger eel, but nobody’s actually seen it.”

Fisherman Steve Homewood said he thought it might be a seal, one of which was accidentally caught by his 11-year-old daughter Elizabeth last summer.

He said: “People have wanted it to be some huge great fish, but I’m quite sure it will be a seal.

“My little girl caught a seal accidentally last year. She was fishing for crabs and I had to battle with the line for 20 minutes before it came clear.”

Conger eels can grow up to 3m in length, and have been known to attack humans.

In July 2013, one bit a chunk out of a diver’s face during an expedition off the County Galway coast.