Campaigners bid to get a third Brighton pub protected

Campaigners have applied to get a third Brighton pub listed as an asset of community value to prevent it being turned into housing. 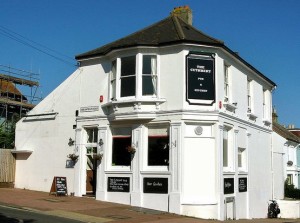 Godfrey Investments has submitted another application to turn the Cuthbert Pub into a three bedroom house and build two more in the former pub garden, after an earlier one was rejected by Brighton and Hove City Council.

But the Cuthbert Community Buyout Group has submitted its own application, to have the pub listed as an ACV which would help prevent it being turned into flats.

And it says it wants to turn the pub, which closed after being sold last year, into a community centre similar to The Bevy in Bevendean, but more along the lines of a cafe rather than a pub.

“We have submitted an ACV application with the council which would give us the right to buy the property before it goes on the open market.

“We hope to raise substantial funds through grants and following that by fundraising and selling community shares.”

Writing in support of the developer’s application, architect Mark Hills said: “The opportunity to convert the pub arose with the closure and disposal of this property, due to lack of patronage.

“The applicant has prepared an accompanying appraisal of alternative community facilities available in the neighbourhood.” (At present, the appraisal is not available on the planning register.)

The previous application sought to build three new houses in the pub garden, and was turned down in part because the applicant hadn’t demonstrated the pub wasn’t suitable to be retained for community use.

Meanwhile, the new owner of the Horse and Groom in Islingword Road will have his request for a review of that pub’s ACV listing heard by the council tomorrow.

Craig Dwyer-Smith is also in the process of applying to convert the usage of the pub to financial services.

Evenden put it back on the market after its planning application to convert it into two flats was turned down by the planning committee.

Being listed as an asset of community value means that if a property is put on the market, the community has six months to raise money to buy it.

It does not mean the owner has to sell it, or indeed to sell it to the community even if they raise the money.

However, it is proving more difficult for developers to get planning permission for a change of use once a property is listed.