Sussex have the Wright stuff for T20 triumph over Gloucestershire

Luke Wright hit a remarkable century to seal a three-wicket win for Sussex in the T20 over Gloucestershire at Bristol this evening (Friday 26 June).

The opener also took the first catch of the evening as Hamish Marshall, with 37 runs to his name, went from the bowling of Tymal Mills. 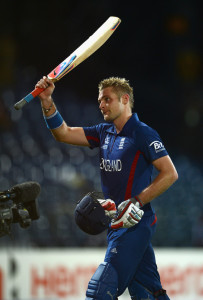 The left-armer also claimed the wicket of Ian Cockbain. He notched up 30 runs. The top scorer for the home side was skipper Michael Klinger. The opener top scored with 61 before he fell to a ball from Chris Liddle played to wicketkeeper Craig Cachopa.

The hosts hit 185 for 4 from their 20 overs, with Ollie Robinson claiming the wicket of Geraint Jones – caught and bowled.

Chris Nash and Matt Machan fell cheaply – for four and five respectively – as Sussex stuttered at the start of their innings.

After Wright’s match-winning 111 tally, Cachopa was the next highest scorer with 18 runs.

After his departure, George Bailey, Harry Finch, Will Beer and Robinson all followed with 39 runs between them.

All looked lost as Sussex needed 43 runs from the final two overs but Wright rose to the occasion.

The captain ended the match with eight sixes and seven fours to his credit – and the knowledge that he had helped the Hove side to edge closer to a place in the T20 quarter finals.