Julie Burchill speaks of sadness at death of son Jack

Julie Burchill has today spoken of her sadness at the death of her “beloved son” Jack, who killed himself earlier this week. 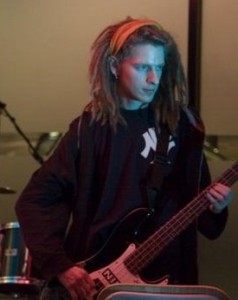 Posting on Facebook, the Brighton journalist told friends Jack Landesman was now at peace and urged people to look after those they love.

She said: “My beloved son Jack Landesman killed himself earlier this week. He is at peace now and in pain no longer and of course I don’t believe that life ends with death, so I am lucky.

“Look after the people you love, as I tried to and failed.”

She added: “Thank you for all your good wishes and offers of support, but I have my Dan, who was a wonderful stepfather to my poor boy for more than half of his life.”

Jack was born in 1986 to Julie and her then husband Cosmo Landesman, was a bass guitarist and is pictured here playing with the Simon Lawrence band, which also featured his uncle Miles Davis Landesman.

Following his parents’ divorce, his mother said she fought hard for custody of him, but he went to live with his father. However, during a Desert Island Discs interview in 2013, the writer said he was then living with her.

In 2008, he studied at the British and Irish Modern Music Institute in Kemp Town.

Principal Vaseema Hamilton said: “We are all really sorry to hear the sad news that former BIMM Brighton diploma student Jack Landesman has passed away.

“Our thoughts are with his parents Julie Burchill and Cosmo Landesman, as well as his friends and fellow students, at this incredibly difficult time.

“Jack studied Level 3 Diploma (Bass) in 2008/9. He was a very well liked young man and a talented musician, who went on to play with his uncle, Miles Davis Landesman. He will be sadly missed.”