A scheme to restore two Victorian villas on a main road in Brighton and create 32 homes has been rejected by planners.

The villas, in Preston Road, Brighton, and a 1950s link building, were once a children’s home and have been empty for the past three years.

Housing association Southern wanted to demolish the two-storey link and replace with a three-storey link.

It planned 25 apartments in the villas and link building as well as seven mews houses at the back of the site. 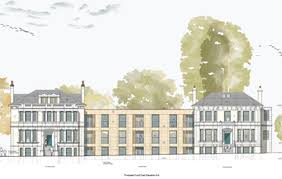 Southern Housing’s regional development manager Jeremy Barkway told the Brighton and Hove City Council Planning Committee: “This is an opportunity to return the site to its former Victorian glory.

“Our proposal will refurbish and restore these two buildings which have been empty for three years and are rapidly deteriorating.

“In a city where land is scarce and there is pressure on the surrounding greenfield space, opportunities to reuse land like this must be given serious consideration.

“The council cannot afford to indulge in turning the clock back and should treat heritage as a resource not a constraint.”

The deal to buy the site from the council is dependent on Southern being granted planning permission.

After the committee rejected the plans, Mr Barkway said that there was a danger that the deal would lapse.

There was little time left to draw up a revised scheme or appeal although it was too early, he said, to say how Southern planned to respond.

Mr Barkway told the committee that they risked throwing away 32 homes – all affordable, with 14 for rent and 18 for shared ownership.

He said that the scheme accounted for more than a third of just 90 affordable homes being funded in Brighton and Hove by the Homes and Communities Agency in 2015-18.

Councillor Joe Miller said: “It’s a welcome development … providing much-needed housing … but I do have reservations about the link building.”

Councillor Carol Theobald said: “It would be good to see this restored and tidied up. It’s a shame our council left it in the state it is in.”

The scheme was, she said, an over-development and would look better if the villas and the link were all one colour. And she added: “I’m not happy with the loss of 51 trees.”

Councillor Maggie Barradell said: “I don’t think if we reject this, we’re throwing it away.”

She said that the villas were beautiful and the houses could be far more sympathetic to the area, which is a conservation area.

“This is a fudge,” she said. “I really welcome the development of the site. We need the housing. I’d like to see this again.”

Councillor Michael Inkpin-Leissner said that he would also like to see Southern draw up an improved application.

He also welcomed the prospect of affordable housing which, he said, was “something that we desperately need in this city”.

Councillor Julie Cattell, who chairs the Planning Committee, said that she welcomed development of the site but would prefer more traditional mews houses in keeping with the conservation area.

The committee voted nine to three against the scheme.