A Hove bee keeper who rehomes stray swarms says he has picked up more this year than ever before, a trend he attributes to the warm weather. 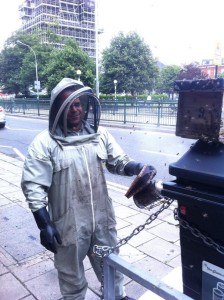 Micklemus Blackman was on the streets of Brighton again yesterday when he came to the rescue of a swarm hoping to make a home in a communal recycling bin opposite St Peter’s Church in York Place.

This was just the latest of about 30 callouts he’s had so far this year, including trips to a swarm which closed the Volk’s Railway for a few hours last month, and another which halted West Blatchington Primary School’s sports day last Thursday.

Mr Blackman, who entices the bees to a new temporary hive before taking them back to his farm in Sackville Road, where they are quarantined before joining his colony.

The beekeeper said: “A swarm is bees’ normal method of reproduction, which happens when a hive gets reasonably congested.

“The more noticeable swarms are the more positive an indication it is that the declining wild colonies are being replenished by commercial colonies.

“The number of swarms has definitely gone up this year, for me anyway. I think it’s climate based – we had an awfully wet 2012 with no swarms, then a cold start to 2013 when there were just a handful of swarms.

“Then 2014 was okay, and this year has been quite good – the bees have thought we’ll go for it this year! Other people’s bees have definitely been very swarmy.

If you’d like to try honey made by the bees Mr Blackman has rescued, Brighton and Hove honey is on sale at Infinity, Down to Earth and other health food shops throughout the city – although this year’s rescued bees are unlikely to produce much, if any, until next year now.

Mr Blackman also runs courses for inexperienced bee keepers. For more information, or to call on his help if you spot a swarm, call 07980 079 101 or email info@blackmanbeefarm.co.uk.