Brighton and Hove Albion have signed Finland under-21 striker Vahid Hambo on a two-year contract.

Hambo, 20, joins from Finnish first division side FC Inter Turku subject to international clearance, having completed a medical and the necessary paperwork earlier this week. 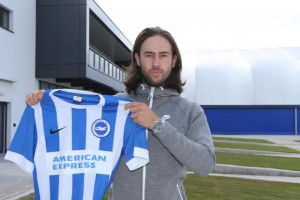 Albion manager Chris Hughton said that the striker would add to his striking options, adding: “Vahid is a centre forward with a good goalscoring record this year in Finland. We hope that is something he can replicate here in England.

“He’s a tall powerful player and he is someone we see as adding to our attacking options but he’s a young player and someone we would see as an option within the squad at this stage.

“I want to see him pushing for a place in the squad at some stage this season but it’s likely he will begin by playing some games for our under-21 side to help him make the transition to English football.”

Hambo began his career as a trainee at HJK Helsinki before spending two years in the academy at Sampdoria.

Last year he signed for the Finnish side FC Ilves and switched to Inter Turku this year.

The Finnish season runs from April to October and during the current campaign Hambo has scored 14 goals in 13 appearances including a hat-trick in a 4-0 win over ROPS.

Albion fans will have to wait to catch their first glimpse of Hambo as he is currently sidelined by a minor ankle injury which is expected to rule him out for two to three weeks.

Hambo also made his debut for Finland’s under-21s earlier this year. He has scored three goals in two matches. He has also represented his country at under-19 and under-17 level.

The former Tottenham Hotspur striker Daniel Akindayini also joined the Seagulls earlier this month on a free transfer. The 19-year-old was a free agent.

Cocaine worth £0.5m seized from Caribbean yacht in Brighton Marina