Pair arrested for digging up bollards to get onto Racehill allotments

Two people have been arrested after bollards were dug up to gain access to land near Brighton Racecourse on Sunday – but the damage has meant a traveller camp was able to get onto the Racehill allotments. 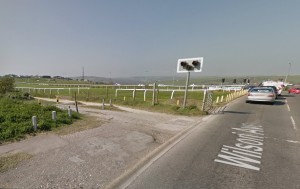 A 42-year-old man and a 41-year-old woman were both arrested on suspicion of criminal damage and remained in custody on Monday morning.

The arrests came after people were spotted digging up the bollards at the top of Wilson Avenue by Brighton Racecourse a few minutes before midnight on Sunday.

A member of the public flagged down police officers who then went to the scene.

The caravans at the allotments are believed to have come from unauthorised camps at either Wild Park or Stanmer Park, which were evicted over the weekend.

A few more caravans are parked by the stables in Warren Road, and dozens more have gone to Waterhall playing fields, where the Shakedown Festival is due to take place on Saturday, August 15. It’s believed they arrived as the Pride campsite was beginning to close down.

A statement on the council website says: “Unauthorised encampments: Groups have arrived on these locations over the weekend and today, after evictions from Wild Park and Stanmer Park.